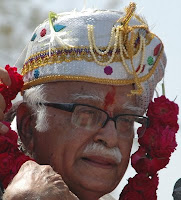 After losing the 2004 general election, the BJP had gone into denial mode. After comprehensively losing this year's general election and scoring the lowest tally since 1991, the BJP has gone into inaction mode, hoping the problems that led to its defeat will just disappear and the hugely disastrous Election 2009 strategy will turn into a winning gameplan by 2014!

It won't happen that way. It's a pity that the party refuses to accept and internalise the fundamental message of this election: Voters are not enthused by a leadership which cannot connect with India's youth and its aspirations. As a young colleague at my office said, "How can I relate to someone who was in his early 20s when my father was born?"

In sharp contrast, the Congress glitters. It's brimming with youth power.

If presence in the blogosphere could win a party elections, the BJP would be occupying the Treasury Benches in Parliament today. But who is to tell the BJP's leaders that there's a vast difference between virtual reality and reality? When flatterers crowd the court, the story can be no different from that of the emperor without clothes.

Whoever becomes Deputy Leader of Opposition in the Lok Sabha will remain in the shadows; the others will be mere back-benchers. The so-called 'GenNext', well into its late 50s, will remain 'GenNext' for the foreseeable future. I can't see leadership passing into the hands of 'GenNext' in Parliament and outside any time soon.

A bit like the Prince of Wales who is still waiting to don the crown. His Website says, "The Prince of Wales is first in line to the British Throne." Similarly, many in the BJP are 'in line' for the top job. Charles, by the way, was born in 1948. If he can nurse hope, so can BJP's 'GenNext'.

Sense and sensibility have ceased to matter in the BJP. Look at what's happening in Uttarakhand where the Congress won all the five parliamentary seats. It's a resounding rejection of the incumbent BJP Government in that State.

Chief Minister BC Khanduri was prompt in accepting moral responsibility and offering to step down from office. The party accepted the offer. Five days later, he is still in office.

He could well argue why should he alone be the fall guy for the party's abysmal performance. Others who are clearly to blame for leading the party to its humiliating defeat are sitting pretty, pointing fingers in every direction except at themselves.

Presumably they still hope to make it to power in 2014, by when I will be a grandfather.

5 coastal states accounting for 165 seats in the Parliament are outside BJP's reach. Even one time allies in these states see it as a liability now. Till this puzzle is solved, there is no hope for the party.

In the short term, one hopes there will be some sort of arrangement between BJP-Sena and Raj Thackeray's MNS for the coming assembly elections in Maharashtra. Knowing Balasaheb, this is going to be a big challenge.

Your excellent post has been back-linked in
http://hinduonline.blogspot.com/
- a blog for Daily Posts, News, Views Compilation by a Common Hindu
- Hindu Online.

Please visit the blog Hindu Online for outstanding posts from a large number of bloogers, sites worth reading out of your precious time and give your valuable suggestions, guidance and comments.

Naive as I may sound, it might be a good move to hold onto Advani for a year in order to make a clear transition to Modi. At this point, Modi can't be appointed LoO, but in a yr. time, Advani ji must retire and Modi may run from Gandhinagar.

Removing Advani ji now would create a hassle over who should lead. By far, after Advani, Modi is the tallest leader.