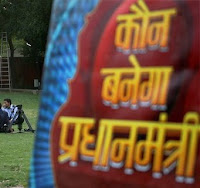 The 24x7 TV channels have revised their estimates of which party is getting how many seats, but while most suggest that it's a close race, NDTV says the UPA has a huge lead. By noon on Saturday speculation will come to an end and we will know who has won how many seats, which does not necessarily mean who gets to form the Government.
Some quick points for whatever they are worth at this hour:
. As in 2004, this time too Andhra Pradesh and Tamil Nadu could turn out to be the gamechangers.
. Other States to watch out: Maharashtra, Madhya Pradesh and Assam.
. Left may not fare as badly as it was expected to. Which could change the post-poll scenario.
. Orissa may throw up some surprises.
. BJP could emerge as the single largest party and the NDA as the single largest pre-election alliance. Does this mean a NDA Government?
. The answer to this question lies in the new chant we hear from the Congress: The President should invite the party which can ensure 'stability' to form the next Government. That's a new one!
. By this time on Saturday, we will have the numbers before us.

Mr. Gupta it is for certain that Pratibha Patil will invite Congress only no matter what are the numbers since she can't be challenged in the court as per the constitution. Then what options do we have when she shows her biased face to repay her debt with interest to Antonia Maino?