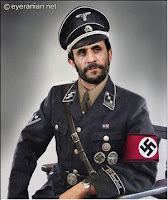 Following are excerpts from an Iranian TV report on swine flu, which aired on IRINN, the Iranian news channel, on May 6, 2009:
Reporter: "Every so often, diseases develop in different corners of the world, and disappear after wreaking damage to the tune of billions of dollars. After avian flu, the time has come for pigs. It is a disease that afflicts pigs, but because of the physiological similarity between humans and pigs, this disease afflicts humans as well. Now, the main actors in this great movie must go into action. The director has fulfilled his role very well, and gathered the boldest and most famous actors for this blockbuster.
"The international news networks air the trailers of this movie for free. With the outbreak of this disease, the American president went into action, and said in a sensational speech: 'My government has consulted health officials, and they have not advised the closing of the U.S. borders.'
"In his speech, Barak Obama mentioned a medicine called Tamiflu - but what exactly is Tamiflu? Who are the compassionate manufacturers of this medicine? This great pharmacist is none other than Rumsfeld, the former American secretary of defense. He is one of the shareholders, and an active and influential member on the board of directors of Gilead Science, which is the main provider of medicine for this disease.
"It should be noted that the Gilead Sciences is a Jewish company. Its name, in Hebrew means "holy place," and all its shareholders are Zionists."
"The US is One of the Few Countries With an Arsenal of Viruses
Dr Ali-Reza Mehrabi, ShaidBeheshtiUniversity: "The United States is one of the few countries with an arsenal of viruses. It is one of the countries with the largest arsenals of smallpox.[...]
"It is interesting that last year, [Rumsfeld] bought, if I'm not mistaken, 18 billion dollars worth of new Gilead stocks.[...]
"If we accept the assumption that work was conducted in a laboratory in Mexico - whether in a pig farm or some other place - the mere fact that this substance found its way out, even if by mistake, shows that the U.S. is conducting experiments in a peripheral country, rather than on its own soil. In this case, the U.S. might have lost control."
Posted by Kanchan Gupta at 12:55 pm