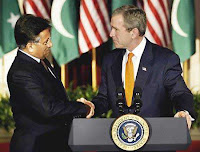 When Gen Pervez Musharraf resigned from his post as President of Pakistan on August 18, 2008, there was speculation that he would seek asylum in a Western country, most possibly the US. Another version had it that the Saudi monarch had arranged for him to shift to a palatial building in either Jeddah or Riyadh. Yet another story said that the Sheikh of Dubai had made arrangements to ‘receive’ him. But nothing like that happened. Gen Musharraf, a cigar-smoking, fun-loving man stayed put in Army House, Rawalpindi, making occasional appearances in public to hold forth, in his pompous style, on internal and external issues. He visited India for the India Today conclave and quite frankly made a fool of himself by talking utter rubbish.
On April 19 this year, when Pakistan began showing signs of crumbling before the Taliban’s onslaught, Gen Musharraf left for a ‘private visit’ to Saudi Arabia. From there he left for a ‘lecture tour’ of Europe, and hasn’t been heard of since then.
It would appear that Gen Musharraf was worried about the Taliban getting him. Which is ironical, considering that he contributed in no small measure to the growth of the Taliban in Pakistan and collaborated with the Taliban in Afghanistan to try and topple the Karzai regime. A recent story in the Pakistani newspaper, Dawn, elaborates on this point.
On Thursday, May 7, PTI put out an interesting report datelined Islamabad. It is reproduced here:

Musharraf unlikely to return to Pak in the near future

PTI/Islamabad
As Pakistan is gripped by a volatile situation following a crackdown on Taliban, question marks hang over whether former President Pervez Musharraf, on a trip to Europe, will return back home or not.
Musharraf is not expected to return to Pakistan from a foreign lecture tour in the near future, said his close aide Maj Gen (retired) Rashid Qureshi.
Qureshi, a former spokesman of Musharraf, confirmed that the former President would stay abroad for a longer period of time but had no information on when he would return home. "I have no idea how long the former President will stay abroad. Though I am still in touch with him, (I) have no exact idea on this count," Qureshi told The News daily. Musharraf, who survived two assassination attempts, is believed to be on the hit list of several militant groups. There has been considerable speculation in political circles about him leaving Pakistan for an unspecified period of time.
Sheharyar, another aide of the former military ruler, said Musharraf is currently in London and would be travelling to the US from there. Musharraf would then travel back to Europe, he said. On Tuesday, a three-member judicial review board of the Lahore High Court had ordered the release of two JuD leaders – Amir Hamza and Mufti Abdur Rehman – and extended the detention of Saeed and Ahmed by 60 days.
In the wake of the Mumbai terror attacks, the UN Security Council had declared JuD a front for a terror outfit.
JuD leaders were placed under house arrest on December 12 last year under the Maintenance of Public Order ordinance, which allows a person to be held for up to 90 days. The review board has subsequently extended Saeed's detention twice.
Posted by Kanchan Gupta at 1:05 pm

Kanchan ji, Intolerant UK strikes again. This is their Secularism, what right do they have to lecture us when they misbehave like this?! Please read "Hindus Religious Rights suppressed in UK".