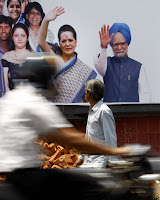 The following are some of the responses I have received to my analysis of the Election 2009 results, "A battle is lost, not the war":

This election has been an utter surprise to everybody; the winners, losers, and even the general population in particular. It was the ballot box keep staring on everybody with great suspense on their self; however, the people have spoken. It is a lesson for everybody to be learnt now, and will be the lesson for the future as well. The title of this article is very appropriate. Learn, learn, learn, from the past, use it in the present, to make the future bright.

I do not think BJP lost because what BJP did or did not do. BJP has million shortcommings, but it is patriotic, indian culture and has the vision for the future. No party comes close to BJP on this. The party - Congress-- that won is anti-national, has no respect for the culture, the country and behaves like they own the country. I think BJP lost becasue, the people of India themselves are very much like congress, so thye feel comfortable with congress.

Normally returning officers declare the serial number assignments after the last day of withdrawal of nominations, which happens about two weeks before polling. ROM chips with mischievous codes can be readied within hours after the candidates’ serial numbers are known. During the two weeks before polling, the malicious ROM chips, or the motherboard, or possibly the whole control-unit, whatever appears easier, may be caused to replace the original ones.

The single most important factor for the BJP's diminishing returns is its lack of sincerity or hypocisy about hindu nationalist issues. I witnessed how under 18 youngsters in UP in the early 1990s would risk going to jail by voting for the BJP by impersonating absent voters because they believed the party, once in power, would construct the Ram temple, do away with caste-based reservations, repeal articles 25 and 370, bring in a uniform civil code etc.

BJP failed because it failed to understand the Public mood. People are no longer swayed by others failures, they want to hear what different you will do. BJP's campaign unfortunately stressed on Congress's failures rather than their visions and commitments for the future. Played the Afzal Guru case too much to publc discontentment.. The middle class didnt blame Congress for the economy because its a global phenomenon. But campaigning should be positive rather than negative.

Good analysis. However, this analysis overlooked few aspects like back-stabbing of RSS in several parts of India. Since Sri Advani made praising comments on Jinnah, several RSS leaders are holding grudge against him and working against party in every election. Secondly, poor are bribed by congress & youth are more concerned about western lifestyle than country's inernal security and corruption. Last but not least, media worked against petty issues related to BJP and Advaniji and diverted nation'

BJP has millions of following in India & abroad. Its amongst the two largest national secular parties. Results for election in 2009, and poor showing of BJP has been the biggest surprise to everyone including all exit polls. BJP has ruled the country for 6 yrs and very secular in character. Its sad that all other parties try to project themselves as secular. Rejections and defeats are part of life and learn from the mistakes made and come back stronger and try to perform much better next time.

Exit Polls are an absolute necessity when EVMs are in use, especially the kind India prefers which have NO PAPER TRAIL! (In the USA, if an EVM result is disputed one can check the paper trail.)

Exit Polls do not have 50% margin of error!

Will India now cease to be a secular state? Will it be partitioned again into Islamic states in next 5 years?

Were the EVMs dispatched from foreign countries just before the election?

Ram's comment is spot on. We Hindus must be most slavish, spineless race on this earth. We despise ourselves, love all things 'Phoren' & praise Islam & Christianity.The pseudo-secular forces have overcome, for the time being, patriotic forces in the country.The BJP needs to reinvent itself by engaging with the rural masses & the enlightened urban people. Isolate the phoney Urban elite who have sold their souls to the sinister pseudo-secular political parties. We need to fight back.

In security studies, political economy and international affairs one becomes aware of strange happenings.The role of media and certain religious groups (which sometimes have strangely cooperated with communists) in usurping or destabilizing the sovereignity of nations is well known. Quite a few people who would have voted BJP were not on the electoral roles, people abroad could not cast their votes easily and it is certainly possible that something could have been done to the evms.

BJP should rise like a phoneix from the ashes and take control. It needs to get media friendly and campaign on issues for the young,

I too opine in line with Ganesh and M.Patil that something must have gone wrong the EVMs. Who knows with what kind of corrupt methods these EVMs and the handlers and technicians of these machines were handled.

Mr. Kanchan Gupta, thanks once again for such a brilliant article in your series. But as you said "It is equally surprising that the middleclass should have chosen to overlook the mishandling of the national economy by the UPA"....

To cut the very root of dynasty politics,regionalism and devolution of more power to states must be required.BJP supported and promoted regional parties and smaller states.There must be aggresiveness from the states where BJP is ruling against Centre for more power to states.In non BJP states, BJP must promote and support regional parties and smaller groups like one in "goorkha land".To prevent the spreading of "dynasty virus across UP, BJP must agitate for trifurcation of the state.

Fully agreed with the writer.. It is going to be a long struggle. At least now we have a very strong presence of a National Party BJP to stand up aginst Congress Ltd. company and its sycophancy. The way forward is to stick with basic ideology, be clear and create a real perception about the party. Never follow congress way of thinking.
Sincerity will surely pay off. Try to create a counter force in the 'third estate' to propagate the real/truth of any contraversial policies etc.

Its a defeat of RSS not BJP .IN future
RSS must send its true best young honest highly educated and well versed in chankya politics in BJP to save India from hindu baiters. Till the RSS in India hindus are safe this i personally feel.
Unless u have best spokeperson and media support ur all work will not become fruitful to make India a safe heaven for hindus as well as all relegions of world

The results and the public mood in the country do not seem to corraborate each other.Either the BJP support is only on blogs and papers or there is something seriously wrong with the EVMs.
The strong performance of mediocre incumbant govts like Maharastra,TN and AP gives much fodder for thought as far as EVMs are concerned. With CEC of doubtful integrity at the helm all is not as rosy as one might expect.Two cases of recounting have resulted in reversal of results.

True, for BJP there is nothing to be ashamed of sitting in opposition. But this time they should function and prove themselves to be a constructive opposition working in the interest of the country and earn more respect from the people of India. The parliament should be allowed to function smoothly without those 'Hungama' we have been seeing for the last five years. And for the congress party , they also should be educated on what is true secularism. For that matter all these politicians.

Kanchanji's analysis is very correct. The media and the press's misinformation campiagn against the BJP and its topleaders has never been attacked and neutralized by the BJP/ their use of varun Gandhi's arrest and quotiing Nitish and sharad Yadav's quotes in mischiivous way to project a collapsing NDA was never attacked by the BJP/

Arun Shourii's comments on Modi as future PM and the shekhavata and Jaswant family sabotaging BJP prospects in Rajastan were never tackled effectively.

Advani said he will get all Swiss black money back.You should do that after you come to power.Perhaps lots of bussiness people voted congress,that is full of corrpupt who all have Swiss accounts!BJP needs lessons about how to fool the masses.

It is great time for ALL who hate Hindus simply because they are Hindus the most despised dark or colored race of pagan religion.Time for White Chiristian west & Islamic Pak & Chinese commies to band together secretly & give the Indian Hindus the Final death blow.This is THE opportunity for these axis of evil whoALL hate hindus (Who hate themselves) to finish off the indian hindus once & for all!Hope they will do it soon.The slavish race has no right to even exist!

THESE REASONS ARE VALID
AND NEED TO BE ADDRESSED.....HOWEVER THE RICH IN METROPOLITAN CITIES HAVE BEEN RUFFLED BY THE SWISS ACCOUNT. HOWEVER THE TRUTH IS THAT THE NAHRU GANDHI FAMILY IS THE MOST CORRUPT POLITICAL FAMILY IN THW WORLD AND IT IS NOT TOO THE DETRIMENT OF THE BJP BECAUSE THERE ARE MANY SKELETONS IN THEIR LOCKER AND SOON LIKE INDIRA GANDHI SUFFERED THEY WILL BE HUMILIATED BY THE WEIGHT OF THE LAST STRAW..

The BJP has to become competitive in all states - TN, Kerala, Andra, West Bengal, Assam, Orrissa,... It cannot hope to increase its tally if it remains restricted to a few states and at the mercy of allies.

To get back into the game, BJP must

(1) Ensure that they have visual media presence. That is the only way they can counter the negative image propagated by the Dynastys retinue.

(2) Eliminate voter fraud. Check those EVMs. How do they know that there is no Trojan software in it? In US they always have a paper trail to check the fidelity of electronic voting.

I could strongly doubt only on one aspect. The manipulation of EVMs.

There are ample reasons to believe..

For example, in one of the booth in tamilnadu, where north indians are majority, BJP got nothing. This is unbelievable, and the people in that area themselves are unable to believe it..

So, either the numbers had been adjusted in the EVM before/during counting or the EVM is itself programmed to siphon off certain number of votes from each party..

please read my blog at psenthilraja.wordpress.com