The Ministry of Home Affairs on July 8 revealed startling details about the phenomenon called 'stone-pelting' in the Kashmir Valley which has led to the re-imposition of curfew in Srinagar and other towns, and putting the Army on stand-by.

The intensity of stone-pelting (during which stones are hurled at security forces, usually CRPF jawans patrolling the streets) can be gauged from the fact that till now 1,875 jawans have been injured -- 211 of them since the latest round of stone-pelting began on June 11. Scores of Jammu & Kashmir Police personnel have also been injured in the stone-pelting.

It has long been obvious that the Hamas-inspired intifada-style 'protest' by young Kashmiri Muslim men, their faces covered by chequered kaffiyeh or balaclavas, hurling stones at security forces was neither spontaneous nor genuine.

Interception of communications between separatists in the Kashmir Valley and their Lashkar-e-Tayyeba/ISI handlers in Pakistan by intelligence agencies have led to the following findings:

.There are four stone-pelters 'associations' functioning in the Kashmir Valley, organising the 'protests' in the streets by mobilising young men, some still in their teens.
.These are -- Jammu & Kashmir Stone-Pelters Association; Stone-Pelters Association of Kashmir Valley; I Am a Stone-Pelter Association; and Stone Throwers Association.
.These 'associations' have been received funds from Pakistan routed via Dubai and sent to recipients in Jammu & Kashmir through agencies like Western Union.
.The money is transferred in small amounts so as to not attraction attention of official agencies.
.This money is used for paying stone-pelters between Rs 150 and Rs 300 a day. Their task is to hurl stones at security forces and try to provoke them into reacting, and disrupting normal life.

Hamas used the same methods during the intifida it organised in the Gaza Strip. 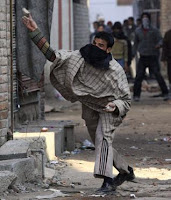 Also see the editorial comment I wrote for The Pioneer.
Posted by Kanchan Gupta at 1:45 pm

What a shame that part of this money comes from the Pirated CD/DVDs we ourselves purchase.
As a Journalist & Writer, what do you think is the best way to educate people to stop buying pirated stuff?

It is the Pakistani way of `confidence-building' with India!

Indian intellectuals and Media ignore one significant fact.What is the cause of these stone throwers?palestenian youths throw stones for vacation of their lands by Jews or Israel.Kashmiri youths throw stones for What?By talking about stone throwers and CRPF injuries we are hiding behind the lie which is kashmiri youth of today want to be part of MUSLIM UMMA and India has to face this fact and act accordingly.

The elephent i the room is Islam/Islamism/Militant Islam. The inane Indian media is busy covering up. Is is any surprise that trust in Media is going down.

Unless we start treating Kashmir like any other Indian state we will never find peace there. All this talk about kashmir being sensitive this and that should stop. Do they pay more taxes for claiming special status?. All our money is wasted there and our security forces and police are pulled up for doing their job

these so called associations are randomn facebook pages by pro freedom facebookers...pseudo nationalists like you can cook up any story that serves the colonial interests of india. you are a pathetic bigoted pseudo-nationalist.