Are we headed this way? 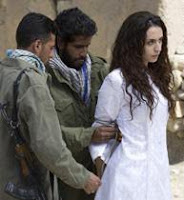 From the film, The Stoning of Soraya M. It is a drama based on the true story of a young Iranian woman who, after being falsely accused of adultery by her estranged husband, was stoned to death by her fellow villagers.

Woman to be stoned to death in Iran
By Hala Jaber

She was only 14 years old when she was forced into a loveless marriage with an older man.Yet within a year of her wedding Azar Bagheri had been charged with adultery and sentenced to be stoned to death.
The sentence could not be carried out until she reached 18.So for the past four years she has been languishing on death row while courts waited for her to reach maturity.
According to Mina Ahadi,an Iranian human rights activist,Bagheri was denounced by her own husband,who accused her of committing adultery with two men.
Ahadi said the teenager had been subjected to two mock stonings.On each occasion she was taken out of her cell and buried up to her shoulders in the yard of Tabriz prison,in northwest Iran,as if being prepared to be pelted to death with stones.
Bagheris lawyers are now planning to ask judges to reduce her sentence to 99 lashes,Ahadi said.Buoyed by an international campaign against Irans death sentence for women convicted of adultery,they hope the court will show mercy.
Last week,after widespread condemnation of the sentence of stoning passed on another woman,Sakineh Mohammadi Ashtiani,43,the Iranians backed down.
Their embassy in London said that according to information from the relevant judicial authorities,the stoning would not go ahead.But campaigners warned that Bagheri could still be executed by other means.
Amnesty International noted that three Iranians sentenced to death by stoning last year had been hanged instead.A mere change of the method of execution would not address the injustice, said Amnestys Hassiba Hadj Sahraoui.SUNDAY TIMES,LONDON. [Courtesy: Times of India, July 12, 2010.]

Plight of a mother

This Iranian woman, a 42-year-old mother of two children, has been held guilty of 'adultery' by sharia'h court on the basis of a forced confession extracted under duress (which she has since retracted), punished with 90 lashes and sentenced to death by stoning. She will be buried neck deep and then stones will be hurled at her. The stones, by law, will be big enough to inflict pain but not kill her instantly.

Her son and daughter have appealed for help to save their mother.
Beware the ominous signs in India
It's no doubt barbaric and horrific. But aren't we who flaunt the secular credentials of the Republic of India heading the same way? Look at the atrocities being committed by khaps in western Uttar Pradesh, Haryana, Punjab and even in the national capital, Delhi, in the name of caste and gotra. Young men and women are being murdered in cold blood and the murders are being glorified by the murderers as 'honour killings'.

Meanwhile, in Kerala an illegal Taliban-style sharia’h court (Darul Khada or god's abode or god's court) ordered that the right hand of Prof TD Joseph, a professor of Malayalam at Newman's College, Thodupuzha, holding him guilty of “insulting Mohammed” through “derogatory references” in a question paper he had set. The sentence was carried out by members of the Islamist organisation, Popular Front, on July 4 when Prof Joseph was waylaid while returning hom from church along with his sister and mother.

Prof Joseph was arrested in April after the question paper set by him for the BCom second year internal exams sparked protests by Muslim outfits, which claimed it had “hurt their religious sentiments”. He was later suspended from college and was out on bail when attacked. Ironically, the disputed question referred to a book written by a Muslim writer of Kerala.

And another story reported from Bihar:

Woman stripped and whipped on orders of kangaroo court
Katihar, July 13: A 35-year-old woman was allegedly stripped and whipped after she defied the diktats of a kangaroo court in Bihar's Katihar district to remarry her second husband. The illegal court at the Gwaltoli-Kalyannagar village summoned the woman on July 8 and directed her to to remarry her second husband from whom she had divorced earlier, Superintendent of Police P Kanan said, quoting the FIR lodged by her.
Kanan said the woman's first husband died four years after the marriage and after some time she married a man named Mohammad Islam of the same village and the couple had a son. But, the marriage did not work and the couple divorced.
Subsequently, when her five year-old son was down with fever, she had to call her divorced husband as she was living in penury, the SP said. After the son recovered Islam left.
He said that Islam and his brother Samsuddin later connived in summoning the kangaroo court which was headed by a former mukhiya, Akalu. The kangaroo court first asked her to pay money equivalent to that required for construction of a house, besides wheat and rice to the former mukhiya.
As she refused she was dragged to a mango grove on the outskirts of the village stripped and whipped.
The SP said the woman lodged an FIR on July 11 after which Akalu and Samsuddin were arrested.

If we the majority remain silent, we won't be able to keep the barbarians at bay. Sooner or later, they will come for us too. And an effete Government, looking at caste vote-banks, won't lift its little finger in admonition. The Congress, remember, hasn't acted against khaps yet.

The Cabinet, which met on July 8, was divided on amending the CrPC to deal with crimes committed by khaps and the adherents of their regressive diktats. Strangely, Minister for Youth and Sports MS Gill put up the strongest objection to a "sweeping law". Our limp-wristed Prime Minister, of course, failed to exercise his authority, though not for the first time. Instead, he decided to set up yet another GoM to "study the complex issue". What's there to study?

A Prime Minister who can be so determined to push his agenda on foreign affairs, especially in regard to relations with America and Pakistan, can't take a decision on an important domestic issue? Indifference? Incompetence? Or plain scared?

Is this the India of 21st century we keep on boasting about? Can we truly claim to have entered a new era of development and modernity? What use is high GDP if such forces prevail?

>>>"Look at the atrocities being committed by khaps in western Uttar Pradesh, Haryana, Punjab and even in the national capital, Delhi."

That rhetoric remains just that.

Khaps take decisions in a consensual manner, not based on any book from gawd.

What is their crime ? To demand that people should marry outside gotra ?

Will you not insist that your son seek a bride outside your family ?

And if he refuses, if he calls you a primitive superstitious relic of past age and exerts his right to choose partner even within family, what will you do ?

If you have any problem with khap decison, you are free to air it during panchayat meeting, in democratic way. Have you tried that before condemning khaps ?

Equating the khaps that take decisions after panchayat meeting and discussions among its members, with sharia that goes by a 7th century arabic book claimed to be from gawd, shows lack of discernment, which is not surprising, considering your profession- journalism.

The suitability of some of their decisons may be debatable. But what is the much trumpeted 'indian judiciary's track record ?

Unilaterally condemning khaps, as you have done shows the exact nature of 'democracy' that india is claimed to have, in sharp contrast to consensual decision making that is possible in khap panchayat.

This is why in general a middle class educated South Indian thinks , north Indians especially the regions you mentioned are unrefined and uncivilized fanatics without sensitivity living in the world of lunacy like frogs in the well.Open up the windows of the world , let them study in one of the European languages and the masses will turn into a class of its own , if not this generation, next generation will be smart with passion, compassion, refinement without fanatical orientation.Unless the animal instinct is cast aside , nothing will change in that North Indian belt.We call ourself equality before law, but how come the so called brawny politicians do in that belt , except fishing in the troubled waters in the name of caste and community.

"Sooner or later, they will come for us too."

Really, Mr. Gupta, this is carrying the comparison too far ...

You are putting yourself in the same position as those "secularists" of India who see "all religions" in the same light.

There is a difference between state-sponsored Islamo-fascism and local Khaps.

Khaps should be prevented, no doubt. But they have an excuse. If ulemas can run the rule of shariyat and force Indian Muslims into situations not permitted by the Laws of the land, why Hindus should not do a similar thing. Well, it is a pervert logic. But this is making our `secular' Govt. hesitant to take action on the senseless activities of any community.

Incognito - are honour killings by khaps honourable? Now, we know that it is not only muslims, we even have hindus who justify fanaticism in the pretext of religion? India is a democracy and nonbody can force some one not to fall in love.

Is MMS really the PM of India? In my view he is just a rubber stamp. The current leadership of India will continue to slaughter it's loyal citizens for the sake of Muslim Vote. Make NO mistake we are at WAR, there is Enemy WITHIN & Enemy at the GATE. Army MUST be given FULL autonomy in Kashmir. Better late than NEVER