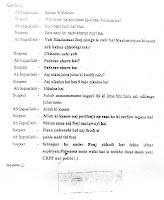 Who’s behind surge in violence in Kashmir Valley?

Here’s a PTI report:
Involvement of hardline separatists in engineering some of the violence in the Kashmir Valley is indicated by an intercepted conversation between two of them during which they discussed killing of at least 15 people in a procession near Srinagar on Wednesday (July 7).

A large procession had started in Budgam district on the outskirts of Srinagar in the evening and two senior office-bearers of the hardline Hurriyat faction led by Syed Ali Shah Geelani discussed how to utilise it to create casualties, according to the transcript of the conversation available with the Home Ministry.

According to the transcript, one of the office-bearers, Ghulam Ahmed Dar, was heard telling Shabir Ahmed Wani, another office-bearer, that a procession of nearly 20,000 people had started from Magam and was going towards Budgam.

Wani tells Dar, "You guys enjoy payments sitting at home and do nothing."

Dar, in his response, says, "The management of crowd becomes difficult later... it gets difficult to manage the mob later."

Dar then ends up by saying, "At least 15 people should be martyred today."

However, in the event, the police dispersed the procession with a mild cane charge and no untoward incident took place.

Yet another intercepted communication (see transcript alongside) exposes Pakistan’s role in fomenting the latest round of violence in Kashmir Valley.
Posted by Kanchan Gupta at 1:17 pm

Clearly there are unemployed youth & men "sitting at home" and stone pelting is a job for them! So, why cannot India find some government project and employ these people. If they're at work they have no incentive to pelt stones. After all, stone pelting is hard, dangerous work and no job security.

an this is the reality of this tape along with the orignal audio link to ndtv
http://bit.ly/the-real-translation-kashmir-call

What we must understand is that Pakistan behaves like a woman scorned, or even like a woman raped, as far as India is concerned. I have always maintained that Pakistan was raped by India and Bangladesh was born. Pakistanis have not forgotten India’s role in the splitting of their country (although the Pakistanis split our India in 1947 and they feel absolutely proud about it). They are burning with longing for revenge against India and to pay back with same coins. They tried very hard, although unsuccessfully, in Punjab, by financing the Khalistanis. Now they are up to their evil tricks in Kashmir, in the name of Islam.

They cannot digest the fact that India needed to help and arm the Mukti-Bahini for sheer humanitarian reasons. In East Pakistan, West Pakistan tried to wipe out the Bengali language altogether, which turned out to be more important than Islam to supporters of Sk Mujibur Rahaman. Also, their soldiers had been raping the women of East Pakistan after kidnapping them from their families and even picked up from streets. In every Military camp hundreds of pregnant Bengali women were freed, as related to me by a Major who was with the first brigade to enter East Pakistan and free prisoners and capture Pakistani soldiers. Where were the Humanitarian Organisation then?

Therefore, anyone who wonders why Pakistan is our enemy, and why they are motivating and financing the Kashmir separatist so relentlessly, must keep the above facts in mind. Unfortunately the common Kashmiri is getting the worst deal. Only about 25 years back the Kashmiri was among the richest, on an average, in India. Their Shikharas used to be booked years in advance, and every summer the whole of Indian Elite headed for Kashmir. Now the mood has changed and their anti-Indian, Islamist and anti-Hindu attitude creates a very negative image indeed in the minds of Indian and foreign tourists.

Here is the real transcript...stop spreading your pseudo nationalist propaganda...