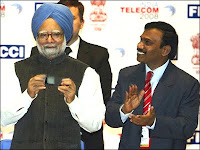 How steep has been our fall as a nation!

Bapu taught us simple living, high thinking. We must practice it. Then only will the nation progress… We have to do that.” And after quoting Mohandas Karamchand Gandhi, after preaching the lofty principle of simple living and high thinking, that is, after donning the garb of moral integrity, Mr Lalu Prasad Yadav, the leader of Rashtriya Janata Dal who used the most innovative methods to loot the treasury of Bihar till there was nothing left to steal, gave the reason why he and his party had decided to support the UPA Government against the Opposition’s cut motion on the General Budget. “It was the BJP which instituted cases (of corruption) against me and (my wife) Rabri Devi. Congress did not set the CBI on me,” Mr Yadav said, asking rhetorically, “And you expect me to vote along with the BJP?”

That was in the Lok Sabha during the debate on the Finance Bill on Thursday, April 29. Our honourable MPs listened to Mr Yadav explain why he did not support the cut motion. People in our wondrous land who elect Mr Yadav and his ilk to Parliament heard him. There are parliamentary records to prove that he said what would be considered shocking and outrageous not many years ago — that political support can be leveraged by not proceeding against corrupt politicians. Today we have come to accept it as legitimate mobilisation of support in Parliament; adharma has become the dharma of coalition politics.

The BJP/Left-sponsored cut motion was defeated by the Congress through the expedient means of cutting deals with three tainted leaders facing prosecution for amassing wealth beyond their known sources of income. The first to fall in line was Ms Mayawati who instructed the BSP MPs to back the Government. She would. Look at the sequence of events. On April 16, the CBI told the Supreme Court that it had witnesses on affidavit to prove that Ms Mayawati had forcibly collected bribes and would like to press ahead with prosecuting the Chief Minister of Uttar Pradesh. This was reported widely in media. A week later, as the Congress struggled with stacking up numbers in its favour, the CBI told the Supreme Court on April 23 that it was willing to consider Ms Mayawati’s request for a closure of the case against her. By Monday, April 26, BSP MPs were enthusiastically supporting the Congress. “We are part of the Government. After all we support it from outside. How can we vote in favour of the cut motion?” a senior BSP MP asked. On April 27, the BSP formally announced its support for the Government and opposition to the cut motion.

Similarly, the Congress used the CBI, or rather promised not to use the CBI, to ensure the support of Mr Lalu Prasad Yadav and Mr Mulayam Singh Yadav, the two leaders of the unwashed masses who would like to see India slide back to the age of lanterns and bicycles while their kith and kin prosper on slush money, hush money, tainted money. In Mr Lalu Prasad Yadav’s lantern-lit Bihar fictitious cows chewed on imaginary fodder; in the benighted Uttar Pradesh of Mr Mulayam Singh Yadav and Ms Mayawati, children feast on mica-laden lumps of clay and then cry themselves to sleep.

The Congress, of course, has no compunctions about sleeping with the tainted and the sullied. After all, the pot can’t call the kettle black. With a hugely corrupt Minister raking in millions of rupees by handing out 2G spectrum in a Cabinet headed by a Prime Minister whose publicists insist he is the epitome of honesty, integrity and probity in public life, and having mocked at the law of the land to exonerate an Italian crook known as Ottavio Quattrocchi who was caught with his snout in the trough called public exchequer, the Congress really cannot claim to be any cleaner than those with whose support it remains in power.

It would, however, serve no purpose to point fingers at those who brazenly flaunt their taint or misuse agencies of the state for political gains. That they are elected to Parliament is a reflection of the larger rot in our society, the cancer that is eating into the innards of our nation: We the people have voted for them, we have done so because we accord caste, community and faith greater importance than national interest. The end result of our cynicism is there for all to see.

Mrs Indira Gandhi had famously sought to gloss over — her critics would insist she was seeking to justify — corruption by insisting it was a “global phenomenon”. Between then and now, we have internalised corruption and made it a part of our lives. Earlier there was this perception that poor salaries forced babus and policemen to indulge in corrupt practices. Salaries have increased by leaps and bounds, so has the level and quantum of corruption. This is primarily because politicians whom we elect to sit in State Assemblies and in Parliament, to govern the nation, are not above corruption and see politics as a means of self-aggrandisement.

And so the nexus remains secure and safe. Politicians collude with babus. Babus collude with contractors. Contractors collude with criminals. Criminals collude with politicians or, better still, decide to become politicians. The vicious cycle is seemingly cast in iron and cannot be broken; it has come to represent the ‘system’. Sadly, the people want it this way. Or else they would have voted out the whole lot and, drawing inspiration from the good governance instituted by Mr Narendra Modi, insisted that all of India, and not Gujarat alone, must shine.

Tragically, that won’t happen. Voters will remain polarised along caste, community and other such faultlines that divide our society and help perpetuate the raj of the corrupt. The self-seeking and expanding middle-classes will insist its interests are protected. The poor will be led like so much cattle by those who shamelessly feed on their misery to live in comfort. It is in no politician’s interest to bring people above the poverty line, so the number of those below the poverty line keeps on increasing: Nearly two-fifths of our people are now categorised as ‘BPL’.

Soon after he became Chief Minister, EMS Namboodiripad was asked by a journalist: “By when will the Communist Government keep its promise of taking electricity to every home in every village?” Namboodiripad looked aghast, and then shot back: “The day every house in every village has electricity the people will stop voting for us. You must be a fool to expect my Government to keep this promise.”

That was many, many decades ago. Much has changed in India since then. But voters, in a sense, remain unchanged. They still vote for politicians who they know will never keep their promise, who will lie through their teeth, who will stand up in Parliament and quote Gandhi and then sell themselves to the highest bidder or trade their vote in exchange of the CBI being called off from prosecuting them for theft and worse. If you don’t believe me, go back to the first paragraph of this column.

Yes, but what do we do with these tainted set up?Congress does manage to come back?

Very well written Blog. I would be very interested to see a follow up blog on what you think is the solution. Agreed that good governance is imperative, but how do we go about bringing that change.

Tremendous post!! But heart bleeds at such blatant in your face corruption. Lalu Prasad Yadav knows his time as MP is finished, he does what he feels. Mulayam and Amar are also done and dusted. Maya surely wont last the next elections. It has to be congress or BJP in UP. Hopefully BJP gets its act together and win.

Is it true that the BJP has not supported an all-party memorandum to the ECI against use of EVMs in elections??

The successive Congress regimes hhave plundered the wealth of this nation, but sadly people are ready to suffer instead of giving another chance to B.J.P party.

There is no democracy in our country. Its a thugocracy. It can only happen in our country that a minister involved in a scam (60000 crore) can get away by saying he is being targeted because he is a dalit. What more do we need? Also, the fact that lobbyists are deciding who will make it to the cabinet says a lot about the oldest political party of India.

The problem in India is people have just got used to the over-population, filth and corruption. I remember the young futurist Sanjay Gandhi had attempted to sincerely do something about the over population, filth and corruption. But he died, some say under suspicious circumstances, unfortunately.
His encouragement of sterilization of folks who cannot afford to have dozens of children should have continued. The value of an Indians has hit the dust because of over-supply. The quality has suffered because of quantity.
There is filth in most parts of our cities and rural India, again because of over-population. Resultantly there is filth in our politics too. We have failed to educate our overpopulated nation, and our under-educated, casteist, villagers have been selecting people who they can relate to, naturally. To elect sophisticated, well-educated, honest leaders you need an educated electorate who can appreciate those qualities! People stamp on symbols like ‘lantern’ and ‘cycle’ and ‘elephants’ because standard of our voters is pathetically very low.
Just the other day I was have debate with a British Bangladeshi who had decided to support the Conservative Party for the UK elections. I was telling him the reason why I am a Labour party supporter for historic reasons- India got independence under a Labour Government, apart from National Health Service, minimum wages etc. He asked me, “Do you really believe India has got true freedom, I mean the vast majority of Indians? How can you say India is a developing and an Independent Nation when so many millions of its citizens are so extremely poor, and hungry for one meal a day and thirsty for clean drinking water? Your country is now exploited by Greedy, Selfish and Corrupt Politicians, just like Bangladesh!”
He stopped short of wishing the British still ruled Bangladesh because I reminded him of the 1942 Bengal famine caused by the British Greed. But what he said made me think for a couple of hours!

It is possible to tell, this exception :)

Love me, love my dog.