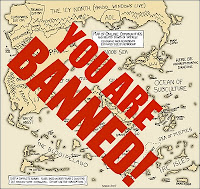 Why ban doesn't work on the Internet!

There was great alarm and panic in Twitterworld across the Radcliffe Line on Friday morning when journalists, not all of them Pakistanis, found they could not log on to www.twitter.com. With Facebook and YouTube officially banned, and a mysterious disruption in BlackBerry services, they were appalled by the possibility of being denied access to Twitterworld where tweets are not just about what’s happening, but what’s happening around you.

The uninitiated may be forgiven for believing that Twitterworld is where you discover the fads and fancies of celebrities and tweeting is no more than social-networking; tweeple not given to frivolity of the variety that got Mr Shashi Tharoor into trouble with the fuddy-duddies in the Congress are increasingly using this new media platform for exchanging information and ideas and instant micro-blogging. Even before a story becomes breaking news on television channels, it is out there via a 140-character tweet. More importantly, a lot of stuff that does not find space in newspapers and news shows finds its way into Twitterworld: Dissemination is instant, without barriers and free of ‘editing’. It was, therefore, not surprising that there should have been alarm and panic when journalists in Pakistan found www.twitter.com being more difficult than it is on certain bad days.

Thankfully, the glitch proved to be temporary: Had Twitter too been banned by Pakistani authorities, it would have meant another window to the world being shut. Those who do not have to worry about their Governments snooping on them in the virtual world of the Internet, or are fortunate enough to live in liberal democracies with open, plural societies, will never be able to gauge the importance of any of the new media platforms like Facebook, YouTube, Twitter, Blogspot and WordPress, to name only a few, for those who find themselves saddled with regimes that claim to be ‘democratic’ but lack the moral courage to uphold the two essential values that define a democracy: Freedom of speech and personal liberty. Facebook, YouTube, Twitter, Blogspot and WordPress acquire a new meaning and a vastly different purpose in countries like Pakistan, Iran and China where they afford their users an exhilarating sense of freedom otherwise denied by prevailing political realities and social circumstances.

When the state blocks access to Facebook, YouTube, Twitter, Blogspot, WordPress and other such Websites, its purpose is to both play thought police as well as curb the human urge for freedom and liberty which, if allowed to take form and shape, can pose a threat to the oppressive ruling elite. But if technology is open to subversion by a repressive state, the repression is open to subversion by the very people whom the state seeks to control and dominate. Just as there is software which blocks access to Facebook, YouTube, Twitter, Blogspot and WordPress — and, in some countries, Wikipedia, Google and related services — there are proxy servers and ways and means of beating the ban.

The Communist Party of China loves to believe that the Chinese in mainland China do not have access to Facebook (and other blogging sites). The truth, however, is far removed from this belief. Similarly, dissident Iranians regularly work around officially blocked and banned sites to send out information about what’s happening in the land of the ayatollahs and their chosen rage boy called Mahmoud Ahmadinejad. Within hours of Pakistan Telecommunication Authority implementing the order of the Lahore High Court banning Facebook — and later YouTube — because a group of Islamist lawyers insisted these sites hosted “sacrilegious” and “derogatory” content, tech-savvy young Pakistanis abroad were tweeting to Pakistanis at home how to defy the ban.

That could be the reason for Friday’s snag in Twitter services, although applications like TweetDeck remained unaffected. Possibly the task of blocking a service accessible through multiple applications proved to be Herculean for telecom service providers. Or the fear of upsetting millions of young men and women in a country with 20 million Internet users may have held their hand. The good news, as of now, is that Twitter is working in Pakistan. The ban on Facebook and YouTube remains, but it is most likely proving notional. As one Pakistani tweeted: “What’s common to Facebook and Lashkar-e-Tayyeba?” and then replied in jest, “They are both banned in Pakistan, but Pakistanis can still find them if they want to!”

The issue, however, is less to do with the absurd order of the Lahore High Court and the knee-jerk reaction of Pakistan Telecommunication Authority — obviously at the behest of the Government headed by Prime Minister Yousuf Raza Gilani, a deceitful though effete politician — and more about taking recourse to proscription as a means of perpetuating thought control and suppressing freedom of speech. In Pakistan and other Islamic countries, Islamists and fanatics unite in seeking to deny co-religionists the right to disagree and express dissent on matters of faith. The concept of blasphemy, which should really be restricted to believers of the faith that has been blasphemed, has now been expanded to include those who subscribe to other faiths or to no faith at all.

Hence, we have now reached a stage where mullahs in Pakistan feel emboldened enough to declare that American cartoonist Molly Norris is guilty of committing ‘blasphemy’ by creating a Facebook page for ‘Everybody Draw Mohammed Day’ last Thursday and, therefore, deserves to die. That Ms Norris has denied the allegation — “Hello, I never created a Facebook page for EDMD. A stranger to me did so. Thank you, Molly” she wrote on her webpage — and that it is possible for anybody to open a page on Facebook or upload a video on YouTube under an assumed name is of little or no consequence to mullahs who in all probability do not know the difference between a mouse and a keyboard but wield terrifying power in this day and age.

It could be argued that the Pakistani authorities were wise in taking pre-emptive action rather than allow the mullahs to take to the streets and run amok as they did in 2005 following the contrived controversy over the alleged lampooning of Prophet Mohammed by cartoonists in the Danish newspaper, Jyllands-Posten. More importantly, it could be pointed out, and justifiably so, that we in India, a country which takes pride in portraying itself as a democracy with a liberal, open society, are really not better off: After all, our Government too is given to banning books, films and Websites that are perceived to be ‘offensive’ to communities, especially the religious minorities. Our mullahs are no less vicious and their mindset no less regressive than mullahs in Pakistan or elsewhere.

Technology, however, is proving to be a great leveller. It is easy to ban books and films and proscribe publications. But it is extremely difficult, if not impossible, to ban Websites and digital platforms. That is today’s reality and we might as well learn to live with it. We can’t demand freedom of speech and freedom of faith without conceding the freedom to offend; ideas must be contested with ideas and not sought to be stamped out by bogus decrees. To refuse to accept this fact would be to under-estimate the power of technology — that would be both foolish and dangerous.