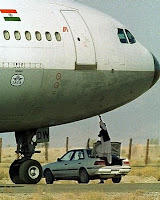 How will Congress react if push comes to shove?

Nearly five years after the Cabinet Committee on Security cleared what was then billed as a ‘tough anti-hijacking policy’, the UPA Government has decided to amend the antiquated Anti-Hijacking Act of 1982. The purpose behind the proposed amendments, we are told, is to make the punishment for hijackers harsher so that the law acts as a deterrent. It would be churlish to cavil against such intent. After all, what good is a law unless it scares the daylights out of potential criminals and forces them to desist from risking the state’s clenched fist of fury?

The Government, therefore, should be complimented for deciding to make the law against hijacking more stringent. On Friday, the Cabinet discussed and approved the proposal, as drafted by a Group of Ministers headed by Union Minister for Home Affairs P Chidambaram, to introduce the death penalty for hijackers of aircraft. The 1982 law stipulates that hijackers and/or their accomplices will be sentenced to life imprisonment as well as made to pay a fine. Obviously, such measures have not proved to be a deterrent, hence the decision to make hijacking a capital offence. This will also necessitate an amendment to the definition of hijacking. Although the exact language of the proposed amendments has not been disclosed, it would be safe to assume that the amended law will describe hijacking as tantamount to ‘waging war on the state’.

Till such time the draft Bill amending the Anti-Hijacking Act of 1982 is circulated, any detailed comment on the proposed changes in the law would be premature. It also remains to be seen how much of the UPA Government’s declared policy to prevent hijacking of aircraft and deal with hijackers in the event they succeed in seizing a plane is reflected in the Bill. Policy and law are not necessarily inter-changeable, nor is there any binding requirement for the former to be codified through an Act of Parliament.

However, it would be in order to recall the salient features of the anti-hijacking policy that was cleared by the CCS in August, 2005. The policy commits the Government to treat any attempt to hijack an aircraft, or the hijacking of an aircraft, as an act of aggression against India. Hence, the Government will respond in a manner that is fit to deal with an aggressor. Second, hijackers, irrespective of whether they succeed or fail in their mission, will be sentenced to death. Third, the Government will engage hijackers in negotiations but not to cut a deal. Negotiations will be aimed at bringing the hijacking to an end, to comfort passengers and prevent loss of lives. Fourth, IAF fighters will try and force hijacked aircraft to land. Fifth, if hijackers try to use the aircraft as a missile to strike ‘strategic targets’, as was done on 9/11 in the US, the plane will be shot down. Sixth, if a hijacked aircraft lands at an Indian airport, it will not be allowed to take off under any circumstances.

According to details of the policy made available to media in 2005, the Bureau of Civil Aviation would be asked to prepare a list of designated ‘strategic targets’ that hijackers might target with a commandeered plane. Since the list would qualify as ‘Top Secret’, we will never get to know what all are deemed as ‘strategic targets’. The Government is neither obliged to nor should it voluntary disclose the list. As for the decision to shoot down a hijacked plane to prevent it from being used as a missile to blow up ‘strategic targets’, it is supposed to be taken by the CCS. If there is no time to go through the elaborate process of summoning the CCS, the Prime Minister, the Defence Minister or the Home Minister are authorised to take the call. Air Force officers not below the rank of Assistant Chief of Air Staff (Operations) will have the authority to prevent a hijacked aircraft from taking off, if necessary by shooting at the plane. All this, of course, is based on the presumption that the policy, barring the death penalty for hijackers, which requires an amendment to the 1982 law through an Act of Parliament, has been implemented. For all we know, it has been shelved in a ‘red corner’ file in the ‘Not to Go Out’ section in the Prime Minister’s Office.

We no doubt need to adopt a tough law both to prevent hijacking of aircraft and punish hijackers. But are a no-nonsense policy and a tough law sufficient to deal with a problem faced by Governments across the world after 9/11? More important, what good are a policy and a law if they are not implemented? It’s not only about determination, which the UPA Government lacks in large measure, but also compulsion. For instance, if push came to shove, it would be a tough call to issue instructions to shoot down a passenger aircraft. Apart from the moral dimension, there is the legal aspect: Can the state take such an extreme measure? The courts in Germany and Poland have ruled otherwise.

Which brings us to the other moral compulsion: Can any Government decide to callously ignore the plight of the families of hostages on a hijacked aircraft? The low point of the NDA Government was no doubt its capitulation to the demands of the hijackers of IC 814 which led to the release of three Pakistani terrorists, Maulana Masood Azhar, Mushtaq Ahmed Zargar and Sheikh Ahmed Omar Sayeed. That capitulation followed the NDA Government giving in to the demand of the families of the hostages “to do anything to secure their release”. In hindsight, it is easy to say that Mr Atal Bihari Vajpayee erred, that he should have stood firm rather than be persuaded by tearful relatives of hostages to accept the hijackers’ demand. But would any other Prime Minister or Government have acted differently? Mr Chidambaram has been candid enough to admit that this is a question not easily answered.

As for the deterrent value of the death penalty proposed for hijackers, it is doubtful whether terrorists will feel deterred. Jihadis are not scared of death; they see it as ‘martyrdom’ which will fetch them a short-cut to a zannat teeming with houries. In any event, the threat of a state which does not have the courage to punish terrorists after a fair trial — Afzal Guru, held guilty of masterminding the jihadi attack on Parliament House in December, 2001, and sentenced to death by the Supreme Court in 2004, is yet to be executed — will raise no more than condescending twitter among those planning to hijack passenger planes. It is one thing to have a Prime Minister who is a fawning admirer of the US and eager to do its bidding, it is quite another to act like the Americans did when they intercepted an Egypt Air plane carrying the hijackers of the Italian cruise ship Achille Lauro in 1985 over the Mediterranean and forced it to land in Sicily. Or conduct a daring commando raid on foreign soil to free hostages as the Israelis did in Entebbe in 1976 . That requires courage, not a harsh Act of Parliament or a hard policy, neither of which is worth the paper it is printed on.

Which does not make the Congress any better. The UPA has miserably failed to deal with the Maobadi problem just like it has made all of India vulnerable to Pakistan-sponsored jihadi attacks. The amended Prevention of Unlawful Activities Act remains on paper; the much-touted Operation Green Hunt is no more than Government bluster. It increasingly appears that no Government in India is keen to tackled internal security issues. Which is a shame and a pity.

PS: The BJP, in the five years that it was in power after the IC 814 humiliation, should have amended the 1982 anti-hijacking law and adopted a tough policy to deal with hijackers. Instead, it chose waffle over action and paid the price in 2004 -- and again in 2009.

[This appeared as my regular weekly column Coffee Break in Sunday Pioneer. (c) CMYK Printech Ltd.]
Posted by Kanchan Gupta at 11:55 am

True, but in spite of having tough laws---what we need is the will to implement the laws.
In the last few years , I have noticed a lack of will.