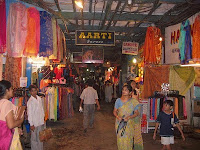 Sir Stuart Saunders Hogg didn’t quite have native shoppers in mind when he built Kolkata’s New Market in 1874. The Gothic red brick structure, which could have sat comfortably in the Empire’s First City had it been built there instead of next to the Corporation Building on Lindsay Street off Esplanade in the Empire’s Second City, housed shops stocked with everything that could tickle the fancy of the sahibs and memsahibs and their babalog.

The finest tableware, the best linen, fashionable dresses and dress material, fresh meat, fish and vegetables, confectionery and bread baked to suit the British palate, could all be purchased under one roof. There were jewellery shops to indulge the fancies of memsahibs and tobacconists that sold British cigarettes and Burmese cheroots, briar pipes and hand-rubbed tobacco — smoking was a fine art and not a criminal offence as it is today. There were bookshops that sold The Times (shipped from London) and had shelves crammed with illustrated books, often on gardening and other such distractions to relax over-worked minds that kept the wheels of the Raj moving. All that was fit for consumption by Kolkata’s British elite was available at New Market.

Much later, New Market was renamed SS Hogg Market in memory of the visionary city planner whose concerns were, of course, guided by the interests of the burra log —the natives lived in squalid slums and the upwardly mobile Bangali bhadralok in palatial houses in north Kolkata which was a world apart from central Kolkata. A plaque still exists recalling the official name, but everybody calls it New Market; it’s doubtful if Kolkata remembers Hogg sahib. But then, Kolkata has forgotten much of its past, not all of it glorious but a lot of it that made the Empire’s Second City the envy of those who lived in what passed for cities in the rest of India, including Mumbai.

The sahib log left six decades ago when the Tricolour replaced the Union Jack. Their place was taken by brown sahibs and saree-clad memsahibs. The boxwallahs who were hired to manage Kolkata’s once famous trading and manufacturing firms became the new clientele of New Market. But this phase did not last long. The turbulent 1960s and 1970s marked Kolkata’s rapid decline and fall: The boxwallahs moved on to Mumbai; those who couldn’t migrate in time were left to wallow in self-pity. Living the high life became a badge of dishonour as Kolkata lost its sheen and lustre.

Kolkata may have survived the ravages of the failed revolution which destroyed much of all that was good about West Bengal and its capital city, but it has not quite regained the glitter and glamour that once set it apart. Till 1962, Kolkata was way ahead of Mumbai, Bangalore, New Delhi; Chennai and Hyderabad were not even in the reckoning for a slot in the list of metropolitan cities. That was also the time when Bengalis could say with justifiable pride, ‘What Bengal thinks today, the rest of India thinks tomorrow.’ A half century later, it’s the other way around: What the rest of India thinks today, Bengal thinks tomorrow — that is, if it thinks at all.

New Market encapsulates this decline and decay of the city Sir Stuart Saunders Hogg tried to fashion after London. The Christmas decorations that once made New Market look pretty now seem tacky. New Market never quite recovered from a devastating fire in the mid-1980s when nearly half the market was gutted. The new New Market is a PWD-built monstrosity with shanty shops that sell plastic table covers. The blaze spared the front portion of the market which still stands. The old New Market is now crowded in by cinemas converted into shopping complexes and eateries catering to the lowest common denominator. New Empire, Elite and Globe are now part of Kolkata’s folklore.

Some of the shops are still around in New Market. Nahoum’s, run by old man Nahoum, among the last of what was once a thriving Jewish community, looks run down but its almond rings remain as tasty as ever. Wading through the crowd at Nahoum’s is a daunting task — it always was. The book shops seem to have disappeared, but the crockery stores are there, laden with cheap made-in-China products. Grotesque caricatures of Lalique are no tribute to the much-vaunted Chinese genius.

New Market, it seemed, had turned into a wholesale market for cut-price lingerie with every second shop displaying skimpy innerwear that I couldn’t imagine the middleaged women gawking at them slipping into. But obviously sales are good or else there woudn’t be so many shops selling size zero thongs. Middle class Kolkata continues to get its sum wrong.

After an hour’s wandering in the byzantine passages teeming with bargain-hunters, we find the silver shop from where we had purchased jewellery and table ornaments in the past. The owner is as effusive as ever, although business, he tells us, has been bad. In his velvet-lined oldstyle display case we spot an antique silver comb with gold-plated birds for which he asks a fraction of the price it would have fetched in Mumbai, Bangalore or New Delhi. But then, Kolkata no longer competes with these cities and the shoppers at New Market are not looking for antique jewellery. We haggle over the price before buying the comb. Clutching a memento of Kolkata’s past, we exit New Market to the strains of Una Paloma Blanca (When the sun shines on the mountains / And the night is on the run...). George Baker Selection was a big hit in the 1970s and Una Paloma Blanca topped the charts in 1975. That was possibly the last year New Market glittered at Christmas — sort of a marker setting apart the past from the present.

Outside New Market,what was once upon a time a tidy square now looks like a flea bazaar, no different from Chandni Chowk as we know it today. There’s nothing charming about the place any more. New Market serves as a soot-darkened backdrop to the theatre of everyday life in Kolkata — the past fading into the distance as the present looms menacingly near. The cacophony of honking taxis, blaring bus horns and shouting hawkers is an instant recipe for a headache that lingers late into the night.

[This article originally appeared as my Sunday column, Coffee Break, in The Pioneer.]
Posted by Kanchan Gupta at 10:26 am

- How easy and convenient of you to brush away Chennai?

Why do all english writers celebrate a city and for the sake of it belittle Chennai? coneveniently ignoring the fact?

What are your parameters for defining a city as Metropolitan?

You too Kanchan da?