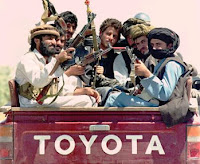 It matters little to the 70 countries whose representatives met in London last Thursday to discuss the modalities of striking a deal with the Taliban in Afghanistan what Afghans think of the cowardly decision. “The London conference was not about Afghanistan, but about British Prime Minister Gordon Brown’s re-election campaign,” Mr Aziz Hakimi, who heads an NGO in Kabul, has been quoted as bitterly commenting after the adoption of a $ 500 million ‘Peace and Reintegration Trust Fund’. Those who take a less than charitable view of US President Barack Hussein Obama’s much-hyped but utterly hollow AfPak policy and America’s trans-Atlantic ally’s sudden urge to end the Afghan war have promptly dubbed the ‘Peace and Reintegration Trust Fund’ as the ‘Taliban Trust Fund’.

The outrage is understandable. The absurd theory of there being a ‘good’ Taliban with whom the world can co-exist in peace and a ‘bad’ Taliban who should be shunned has finally been put to practice. Worse, the London conference has succeeded in erasing the mythical line separating the ‘good’ Taliban from the ‘bad’ Taliban. Never mind the display of faux displeasure and bogus dismay by the Americans in London; we can be sure that the decision to bribe the Taliban, ‘good’ and ‘bad’, with “jobs and homes” — euphemism for sacks of greenbacks — so that they give up their murderous ways, had the Obama Administration’s prior approval. In fact, the proposal, for all we know, may have emanated from Washington, DC. It was unveiled in London.

Mr Mark Sedwill, Nato’s newly-appointed civilian chief in Afghanistan, has been candid enough to admit that the proposed deal will involve reaching out to “some pretty unsavoury characters”. In effect, this means seeking peace with those who have sheltered Al Qaeda’s top leaders, including Osama bin Laden and Ayman al-Zawahiri. They will be asked to “cut ties with Al Qaeda and other terrorist groups and pursue their political goals peacefully” for a certain price to be settled in cash. The US, at least officially, was opposed to a blanket offer, insisting that it should be limited to Taliban ‘fighters’. But it does not appear to have pushed this point too far, which only suggests that the ‘Peace and Reintegration Trust Fund’ is the outcome of a pre-rehearsed, carefully scripted, exercise.

Ironically, Pakistan and Saudi Arabia, which worked in tandem with the US in the early-1990s to facilitate the birth and rise to power of Mullah Omar and his evil gang that the world came to know as the Taliban, will now “play a key role in the reintegration process”. Pakistan, cock-a-hoop over the outcome of the London conference, has offered its services to train the Afghan police and security forces. We could soon see the ISI expanding its reach into, and control over, Afghanistan. In a sense, the US has conceded Pakistan’s claim over Afghanistan; Islamabad can now look forward to regaining its ‘strategic depth’ through a puppet regime in Kabul.

Afghanistan’s President Hamid Karzai is welcome to believe that he has secured his job, but so did Mohammad Najibullah suffer from delusions of invincibility till he was strung up from a lamp-post with his family jewels stuffed into his mouth. Yet, there’s little that Mr Karzai can do, apart from hope that the American and Nato troops won’t just up and leave but hang around “for at least a decade”. The contours of the ‘reintegration process’ will emerge at a peace jirga which Mr Karzai says he will convene in the coming weeks. But it’s unlikely that he is in command of the unfolding situation: It’s more than likely that Pakistan, backed by the US, will now call the shots, to begin with covertly and increasingly overtly as it gets into the act of reclaiming what it had lost in the aftermath of 9/11. Unless, of course, things go horribly wrong and the ‘Taliban Trust Fund’ turns out to be a non-starter.

For the moment, there is no reason to believe that the proposed deal with the Taliban will unravel, or be an exclusive affair restricted to the ‘good’ and not the ‘bad’ among the wretched lot. It now transpires that regional commanders of the Taliban’s infamous Quetta Shura held secret talks with the UN’s special envoy to Afghanistan, Mr Kai Eide, in Dubai on January 8. The Guardian, which broke the story, quoted officials as saying, “They (the Taliban) requested the meeting to explore avenues for talks. They want protection to come out in public.” A UN official, confirming the Dubai talks, said, “The Taliban made overtures to the Special Representative to talk about peace talks… That information was shared with the Afghan Government and the UN hopes that the Afghan Government will capitalise on this opportunity.” Capitulate, and not capitalise, would be a more appropriate word.

Having decided to sup with the devil, it makes little or no sense to set a standard for those invited to the supper. Ms Hillary Clinton, rather than take recourse to subterfuge, was being honest when, commenting on the London deal, she said, “The starting premise is you don’t make peace with your friends.” Having accepted this fact, the Obama Administration should stop pretending that it is opposed to the idea of a “future Afghan Government that includes allies of Mullah Omar”. Nor should US Special Representative Richard Holbrooke make a show of insisting that the “peace plan should focus on low-ranking Taliban fighters motivated by money, not ideology”. Mr Holbrooke is welcome to insist “That is not on the agenda here. There is nothing happening on it involving the United States” and that “the Taliban’s renunciation of Al Qaeda is a red line” for the US. Such assertions on drawing a ‘red line’ amount to what is referred to as a ‘red herring’. If Pakistan and the Taliban suffer from serious trust deficit, so does the US.

India should be worried — very, very worried — about the US-sponsored attempt to legitimise the Taliban and thereby instal Pakistan’s proxy regime in Kabul. But with a limp-wristed Government taking instructions from the US, there is little that we can do other than fret and fume. There is something extremely sinister about the orchestrated clamour in the New Delhi Establishment, of which certain sections of the media are an integral part, for the resumption of India-Pakistan talks. That the dubious initiative to revive the stalled bilateral dialogue should coincide with the London conference and the appointment of Mr Shiv Shankar Menon as National Security Adviser is not entirely surprising. India’s humiliation at Sharm el-Sheikh will now be taken to its logical conclusion by Mr Manmohan Singh, ably assisted by Mr Menon. If you have any doubts, look at the craven alacrity with which Minister for External Affairs SM Krishna has signalled that the UPA Government is willing to “do business” with a Taliban legitimised by the US.

Afghanistan's status as the "GREAT-GAME" hasn't changed through centuries. And all the players are obviously playing it for their own interest.
US: To eliminate jehad from the face of the earth was never US objective, therefore, when 9-11 happened it invaded "Iraq" and sent its forces to deal with Taliban and Al-Qaida who actually carried out 9-11 only as an afterthought. US only wants them to not harm their assets, and don't care about the activities of the jehadis as long as it doesn't harm them, so the easiest way out is to grade them as good and have a pact with them.
UK: Now, UK is to US what Robin is to Batman, so its position doesn't need a second guess.
Pakistan: Pakistan always considered Afghanistan to be it's backyard and called it "strategic depth". They never wanted the status quo to change, even if that required going through the motions of waging a war against the same jehadis they created.
India: The most confused of them all. great at delivering moralistic running commentary. Has no clarity on its own strategic objectives and no clue whatsoever about how to achieve them whatever they are.

It appears that Mr. MMS and Mrs. S.G will preside over dis-integration of India. But can it happen within the next three to four years? Does anybody really think that she is going to stay in India that long? Is giving away Kashmir going to be the first step in that diection? I have a feeling that the Indian armed forces will be incapacitated before that. Is there any awareness campaign in the country about the coming catastrophe? One thing is sure, the media is working fiercely to dope the whole nation by diverting the attention of the people.

If India should be " worried " I think it has earned it. India overestimates its range of influence and importance.

For too long , India has bent over backwards trying to ingratiate itself with Afghanistan.

Rebuilding Afghanisthan ?? Why on earth ? Is our own country in ship shape ? That it wants to invest its resources in bolstering up an inimical neighbour.

Lot of goodwill gestures like free surgeries , free Jaipur foot fittings + free hyperventilation sessions by godman SSSSRaviRaviShankarShankar & fond croonings of kabuliwala songs did not help in any way the hijacked passengers or the beheading of Indian engineer Suryanarayanan.

It is an open secret his country thrives on drug trade. Gulf countries are very smart engaging their so called islamic brotherhood neighbours only to the extent necessary. Never go all mush.

The Good Taliban means the one that sponsors terror in India. The Bad T is the one to do that in the US!