'I dream of a strong, prosperous India' 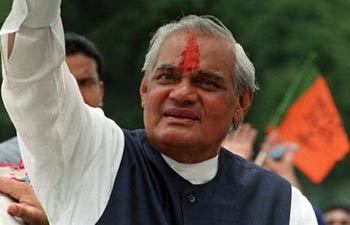 "At a time when every party was singing paens to the Nehruvian model of command economy, the Jana Sangh was demanding that the economy be freed from the clutches of Government control..."

This is what Atal Bihari Vajpayee told me when I interviewed him in December 1997. It was published in The Times of India under the headline: The Man India Awaits.

I accidentally stumbled upon the text of the interview. Re-reading it, I realised he was a true visionary, a towering stalwart among pygmies who then crowded the Government at the Centre as they do now; a leader who inspired hope and kindled aspiration, much like Narendra Modi does today.

It's a long interview. I thought of breaking it up into smaller parts. Here goes the first of the lot. Read, retrospect, react.
At a political rally addressed by Mr Atal Bihari Vajpayee, as the veteran leader took the mike, somebody from the audience shouted, “Desh ka pradhan mantri kaisa ho?” and the others responded with “Atal Bihari jaisa ho!|” Mr Vajpayee, in his inimitable style, began his speech by saying, “Sawal yeh nahin hai ki pradhan mantri kaisa ho. Sawal yeh hai ki desh kaisa ho.”

Mr Vajpayee's pride in his Indian heritage is deep, vast and abiding. If, on the one hand, it causes him deep distress at the present state of the nation, it also forms the foundation of his hopes for tomorrow on the other. Indeed, the greater the sorrow he feels, the more determined he grows to make India rise above its failures and resume its place at the apex of civilisation.
A popular poem of his offers abundant proof of this.

He exhorts Indians to find within themselves, the daring, courage and honour that characterised great Indian men of yore. His call sounds for all those who can willingly make sacrifices without expecting either fame or any other reward in return ... “who burn like a flame in the dark even while others shine in the light of fame”. His summons are for people “who have the glorious vision of the future in their eyes and the speed of storms in-every step”. He knows that nothing can stop the rising tide of patriotism and it is with this knowledge that his call rings out: “Come all who dare.”

Let me make it clear that Swadeshi does not mean that India will become an island by itself or become isolationist. Neither does it mean that we will not allow the inflow of new ideas and  new technology or, for that matter, foreign investment.

Swadeshi essentially means that people should have the confidence to build a modern and prosperous India by working hard and making the maximum use of the resources that are available at the moment. It means making India a global player. It means strengthening our indigenous research and development. Swadeshi ultimately means ensuring a reasonable standard of living for all citizens.
Those who say that India cannot move forward unless others come to our aid, are wrong. We have an abundance of natural resources, trained technical manpower and our achievements in science and technology are remarkable. Therefore, there is no reason why we should not have pride in our national capabilities. I would say, in a nutshell Swadeshi means "India can do it and India will do it".

Would you reconsider liberalisation?

There can be no going back to a completely state-controlled economy in which, instead of rewarding private sector for higher production, limits were imposed through quotas. Since its inception, right from the days of the Bharatiya Jana Sangh, my party has all along demanded deregulation of the economy and cutback in Government controls. At a time when every party was singing paens to the Nehruvian model of command economy, the Jana Sangh was demanding that the economy be freed from the clutches of Government control.

Expansion of the public sector without developing a professional managerial class for the public sector enterprises has made many of them unprofitable and unviable. I believe that we should try and revive those undertakings that can be turned around. In any event, I am against substituting the earlier policy of indiscriminate expansion with indiscriminate closure. In all this, the workers' interests need to be safeguarded.

There is this view in your party against consumer items, especially those manufactured by MNCs...

What I and my party are opposed to is allowing the Indian market to be swamped by products that offer an illusion of prosperity but in reality meet the demands of a very narrow band of people. Putting it simply, we are against unlimited consumerism which may appeal to cosmopolitan, upwardly mobile Indians, but ignores the needs of 75 per cent of the country's population that lives in our villages. Other countries in South-East Asia that have prospered, have done so through high rates of saving. We, too, must strive for higher savings rates.

If you were the Prime Minister, would you recommend a change in the manner of approval of foreign investments or regulate its inflow?

I would ensure that every investment offer is decided on merit and whether it meets our country's needs. I would bear in mind our national interests.

There is an increasing demand from Indian industry for a level playing field. Which essentially means a degree of protection for local industry...

I am inclined to agree with them. Indian industry has to be given time and all help to prepare itself to meet the challenges of globalisation. Till recently they operated in a largely protected market. To suddenly push them into competition, that too with those who are at a more advantageous position, especially as far as access to capital is concerned, is unfair. Yes, I do favour a level playing field. If in the USA they can have this slogan, ‘Be American, Buy American’, why can't we say, ‘Be Indian, Buy Indian’? Instead of being swamped by foreign brands, why can't we make Indian brands globally acceptable?

There is also this thing that economic liberalisation has not benefited small scale industry and agriculture...

Small scale sector deserves full protection and all possible incentives. As for agriculture, we all know that investment in this crucial sector has declined, resulting in a slowdown of
agricultural growth despite a good monsoon. I would consider investment in agriculture one of the top priorities for a Government committed to good governance.

Posted by Kanchan Gupta at 8:58 am

Sir,
Apropos to your historical interview,which is worthy enough and it is to be praised by all those who will enjoy your article.
Synchronously,every Indian does have solemnly believed that Mr. Atal Bihari Vajpayee had had a true reformer as a Prime minister discounting to the other PMs of our country.
The psychological differences are still relatively mattered as follows:-
A) Mr. Atal Bihari vajpayee was a disciple of Rev.Shyamaprasad Mukherjee,who was a well know visionary of build India.And also, His impeccable manner of work cultured and transparency, which had been trained to him to render his political journey,Other PMs are the followers of Nehru/Gandhi family, where they are belonging in praxis of Rev.shyamaprasad mukherjee and propels to non-transparent way.;
B)Mr.Vajpayee was had a great respect and acceptance by minority community & all,On the other hand,other PMs have not had to same comfort,;
c)Mr.vajpayee & his fellow members of cabinet ministers were not involved in dodgy dealings during his ruling periods,Apparently, Other beloved PMs of various hues are rightly arrested to his fellow members by his own administration.;
D) Mr. Atal Bihari Vajpayee was a founder of business connectivity by way of road developments in different parts of India to uplift our Indian Economy and became to stalwart to complete with rest of world,On the contrary, Other PMs failed to carry rightly for the sake of democratic prosperity.;

Barring the above facts the atal behari vajpayee does have tried to introduce as developed country with the rest of world. Unfortunately, however, he had stalk as prevented because of his fast approaching aged he lefts off his unfinished dreams to build modern India.