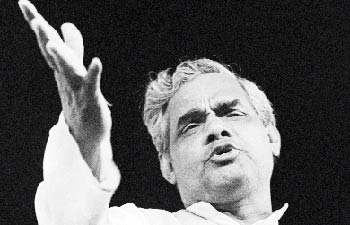 This is the second part of what Atal Bihari Vajpayee told me when I interviewed him in December 1997. It was published in The Times of India under the headline: The Man India Awaits.

The monster of corruption is threatening our polity. How, in your view, could we battle this monster?

As I see it, good governance is possible only when a Government has an ethical base. Tragically, morality and ethics are at a discount in politics today, not only in India but countries across the world. Today we find country after country grappling with the monster of graft; competitive politics is increasingly relying upon the strength of money, more so with the waning of ideology. But corruption cannot be just wished away; it needs to be fought at every level, beginning with the cleansing politics of the influence of money power. The second requirement is extensive electoral reforms...

You have often talked about the need for systemic changes, that we need to have a second look at our Constitution...

After 50 years, yes, the time has come for a second look at our Constitution and to explore the possibility of institutionalising some systemic changes. Some people have pointed out the merits of the presidential system. But here, too, the question arises as to what sort of a presidential system would suit India.

You know, there is this Supreme Court judgement prohibiting any change in the basic structure of the Constitution. We have to bear that in mind. But even within the present structure, certain changes can be brought about, especially to ensure stability. For instance, we could consider a five-year mandate for the Lok Sabha, thus preventing mid-term polls. We could also consider the German system that doesn't allow a no-confidence motion against the incumbent Government but only a motion of confidence in an alternative Government. Whatever it is, but we must look for a cure to this instability. I would suggest that we appoint a high level Commission on the Constitution to take a fresh look at it and recommend systemic changes.

What sort of electoral reforms would you recommend?

Our electoral system is flawed on several counts. For instance, the first-past-the-post system which India borrowed from Great Britain does not appear to have served the country well. Perhaps the time has come for a review of this system and to take a close look at other systems prevalent elsewhere in the democratic world.

A fundamental flaw in our system is that often a party's support base is not reflected in the number of seats it is able to win. With a huge share of the vote, you could end up with seats much below the number required to obtain a majority in the House. Conversely, with a smaller share of the vote, a party could find itself on the Treasury Benches. A direct fallout of this, especially in the wake of the collapse of the Congress which has vacated political space at a rate faster than in which any single political party can occupy this vacuum, is the current political instability. So, why don't we have a look at the list system or a mixed system of representation?

In recent years we have witnessed the emergence of regional parties and the decline of national parties like the Congress. What reasons would you attribute to this...

In the wake of India's independence, there was a tendency to centralise power in
Delhi. Primarily, there were two reasons for this: Our experience of partition and the need to consolidate more than 500 states and the provinces into a Union. Essentially, the idea was to avoid further fragmentation. There was this additional factor that the Congress was the dominant party both at the Centre and in the states. With the national parties fully engrossed by national problems, region specific problems and aspirations were ignored. Over-centralisation also resulted in Chief Ministers running to the Centre for the smallest of clearances and permissions, not to mention funds. All this resulted in the emergence of regional parties. So long as these parties have a national outlook, I see nothing wrong with them.

This brings us to the issue of decentralisation and giving more powers to the States...

Yes, there has to be decentralisation of political as well as economic powers. Decision-making cannot be restricted to the Centre alone. We have been arguing for greater fiscal autonomy for the States as well as shifting the balance of resources in favour of the States. As far as political powers are concerned, on issues like the appointment of Governors, the consent of the Chief Minister should be secured. Needless to add, I am totally against the misuse of article 356 and given a chance, would amend this Constitutional provision so as to prevent its abuse. The Sarkaria Commission's recommendations were allowed to gather dust. Many of those recommendations need to be updated and, more importantly, implemented.

What, in your opinion, should be the character of a stable coalition Government? And, why do you think coalitions have failed till now?

Let me answer the second question first. As a people we are yet to learn the art of working together. If individuals in a party cannot function smoothly, leading to fragmentation of parties, how can parties come together and function smoothly? In any case, this 14-party Government was a joke of a coalition. As for the first question, well, ideally a stable coalition should have a large party as its nucleus. This has been proved in States where coalitions have worked, for example, West Bengal.

The man that India had missed for it's best future. People who didn't understand his strive for India and people who couldn't elect him in 2004 must be ashamed of and should introspect themselves before they talk about politicians,corruption, governance.''SOME TIMES PEOPLE ALSO MUST BE BLAMED''.

Every word holds so true considering the current political scenario. Yes its a shame we couldnt se Atal ji get reelected. Just hope BJP's impending stake in forming the Govt. in 2014does get derailed with the muck being played out off late.

CONSTITUENT ASSEMBLY OF INDIA DEBATES (PROCEEDINGS) - VOLUME XI
Saturday, the 26th November,1949
---------------
The Constituent Assembly of India met in the Constitution Hall, New Delhi, at Ten of the clock, Mr. President (The Honourable Dr. Rajendra Prasad) in the Chair.

Dr Rajendra Prasad:
"...One of the dangers which we have to face arises out of any corruption which parties, candidates or the Government in power may practise. We have had no experience of democratic elections for a long time except during the last few years and now that we have got real power, the danger of corruption is not only imaginary. It is therefore as well that our Constitution guards against this danger and makes provision for an honest and straightforward election by the voters...

...After all, a Constitution like a machine is a lifeless thing. It acquires life because of the men who control it and operate it, and India needs today nothing more than a set of honest men who will have the interest of the country before them..."

nice article
thanks for sharing