Kolkata may have been Calcutta before it was renamed Kolkata, but that did not mean the Empire's Second City had a homogenous society. There was, and still is (well, to an extent), north Calcutta/Kolkata with Ghotis; south Calcutta/Kolkata with its predominant Bangal residents; and somewhere between the two existed a cosmopolitan, English-speaking Calcutta (no, it was never Kolkata and shall remain Calcutta) that finds reflection in Satyajit Ray's film Company Limited. 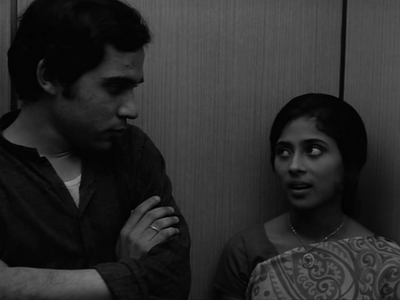 There’s a north-south divide in Kolkata that runs deep beneath any apparent bonhomie between residents of Jorasanko and Jadavpur. The Bengalis of north Kolkata see themselves as culturally superior to those who live in the southern quarters of the city who, in turn, disdainfully scoff: Culture? Hah! There used to be a popular perception south of Ballygunge, not entirely ungrounded in facts which now belong to the realm of history, that the north was all about dissolute baboos and their lonely bibis, sort of a real life version of Bimal Mitra’s Saheb Bibi Golam. “Oraa paayra oraai, baaiji naachaye…” went a line in a popular Bengali film song, luridly suggesting that the baboos spent their days racing pigeons and their nights frolicking with nautch girls.

The north was where the zamindars set up home, absentee landlords who became Bengal’s compradour bourgeoisie and acquired enormous wealth between mid-19th and early-20th centuries. Ships laden with salt would reach Kolkata where they would be handled by Bengal Docking Co, the salt would be traded by Bengal Salt Co, and a share of the profits would go to Carr Tagore & Co which promoted and managed various joint stock companies. There were hints of scandals involving illicit trade in opium; many of the baboos were cheated out of their home and hearth by their conniving British business partners. Amitav Ghosh documents the tragic story of one such zamindar, Raja Neel Rattan Halder, in Sea of Poppies, the first volume of his trilogy on the opium trade. Others made a pile of money and built gorgeous neo-Victorian houses; their sons squandered their inherited wealth on, as the cliché goes, wine, women and music. Rabindranath Tagore was a rare exception.

Actually there was not much of south Kolkata till partition happened in 1947 and Hindu refugees from ‘East Bengal’, which became East Pakistan and is now Bangladesh, trooped into Job Charnock’s city, looking for shelter. They set up home (tiled roofs, marsh reed mats held up by bamboos serving as walls, earthen floors — a far cry from the splendid buildings of the north) in Dhakuria, Jadavpur, Bagha Jatin and other such mosquito-infested colonies. They spoke in East Bengal’s dialect, had a fetish for eelish (hilsa) which they cooked in a mustard sauce and rooted for East Bengal Club during football season. Their struggle for survival in the absence of any Government support and amid the gathering gloom of Kolkata’s economic decline became the leitmotif of a city in ferment during the turbulent 1960s and 1970s. Jana Aranya, written by Mani Shankar Mukherjee, better known by his pen name ‘Shankar’, which was later rendered into an eponymous film by Satyajit Ray, provides an accurate picture of those troubled times when hunger, rage and frustration coalesced to turn vast stretches of south Kolkata into a seething battlefield where the far Left fought it out with the Left.


The ‘Ghotis’ of north Kolkata were disdainful of the ‘Bangals’ of south Kolkata whom they considered as no better than uncouth peasants and country bumpkins. They spoke in Bangla, as opposed to Bangal, insisted nothing could be tastier than chingri (prawns) cooked in a sweetish curry, and went into mourning every time Mohun Bagan Sporting was routed by East Bengal Club, which would be quite often. Enraged by the supercilious attitude of the Ghotis, the Bangals would take vicarious pleasure in pointing out that luchi (puri) was pronounced as nuchi and lebu (lime) as nebu in the fashionable houses north of Chowringhee, which is pronounced as Chowrangi. There were other crudities in the Bangla spoken in north Kolkata which Bangals in south Kolkata described as “chhoto loker bhaasha” (language of the lower classes). Nirad C Chaudhuri would often offer delightful though risqué examples.

The Bangals were dirt poor but valued education; unlike the conservatives in north Kolkata, they were liberal in their social practices and radical in their political views. During the troubled decades they emerged as the urban backbone of the Left movement. While Calcutta University suffered precipitous decline in academic standards, Jadavpur University became the hub of exciting studies (it was the first in India to set up a department of comparative literature; its engineering and science graduates are still a prized catch for Western universities). When Nakshalbari happened, north Kolkata became the battleground between Congress hoodlums and Charu Mazumdar’s guerrillas. In south Kolkata, it was Left versus Left, a fight for domination between Marx and Mao. The disinheritance of West Bengal, first by Jawaharlal Nehru and then by Mrs Indira Gandhi who, between them, ruined the State’s industrial economy through hare-brained schemes like the freight equalisation policy, hit the working class of south Kolkata the most.


All this, of course, now belongs to the past. Over the years there has been migration from the north to the south with families running out of living space. The houses with tiled roofs and marsh reed walls first gave way to pucca dwellings; these have now made way for high-rise buildings. In the early-1980s, Jadavpur was dark and dingy, its narrow roads clogged with traffic and its gutters overflowing with sewage. Over the past two decades or so, it has had an image makeover and is almost unrecognisable now. There are glittering retail showrooms, malls, gyms and restaurants that list ‘continental’ fare on their menu cards. Fervour for Marx has been replaced by fervour for Mamata. Ten years ago we had gone for dinner to a friend’s house at Kalibari Lane near 8B bus stand in Jadavpore. They had served a delightfully mean tel koi and similar fabulous dishes that Bangals alone can cook. On a recent visit I had dinner with them. There was chicken roast (no, not tandoori chicken), grilled ribs and sauteed vegetables on the table.

A strange patois, which Bengalis insist is Hindi but sounds nothing like Hindi, has replaced both Ghoti and Bangal dialects. Aabaar dekha hobey (We will meet again, the standard parting line) is rarely heard. Instead, Bengalis now say, “Pheer milengey”, gratuitously adding, “Theek hai”. Children speak in Cartoon Network English with their parents, and there’s a strange, inexplicable collective rejection of Bangla culture and identity. There is no more any north or south, it’s a new Kolkata which has said goodbye to the city which you either loved or loathed, but could not be indifferent to. There’s a lot of money going around and a dissolute lifestyle is no longer the preserve of north Kolkata.

But memories remain. And the smallest Ghoti slight can leave Bangals incandescent with rage. “These Ghotis will never change,” my Bangal friend said, while helping himself to another portion of chicken roast and reaching out for the jar of Colman’s mustard (no, not the one that is packaged in India). Had I not been a Bangal, I would have retorted, “What you mean is that these Gauls will never change!”
Posted by Kanchan Gupta at 12:45 pm

I think the urban rejection of bengali identity deserves a post of its own. Its lower middle class to wear taant and no sales person will speak bengali, even if they obviously are Bengali.