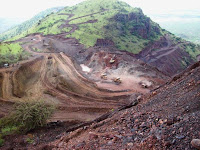 When the Supreme Court’s Forest Bench takes up the issue of illegal mining on Friday (August 5, 2011) it should take a wider view and strike at the root cause of this crime.

Chief Justice of India SH Kapadia and his fellow judges Justice Aftab Alam and Justice Swatanter Kumar were understandably enraged upon reading the report of the Central Empowered Committee, comprising environment experts, on illegal mining in iron ore-rich Bellary district of Karnataka. Even without delving into the details of the extent of illegal mining and the resultant environmental degradation, it would have been fair to call for drastic action to put an end to both. After all, Bellary has been in the news for years, and not always for the shenanigans of the ‘Bellary Brothers’ or the alleged yet-to-be-proven indiscretions of the former Chief Minister of Karnataka, Mr BS Yeddyurappa.

That many of the 124 mining lease-holders in this district have been indulging in rampant illegal excavation of iron ore, either by encroaching into land beyond the leased area or by extracting more than the permissible amount, has been common knowledge for a long time. The Central Empowered Committee’s report has served to bring shocking details to the attention of the Supreme Court, for which it deserves to be lauded. Chief Justice Kapadia and his fellow judges on the Forest Bench also deserve applause for acting in a determined manner to halt illegal mining; action that should have been taken by the executive long ago, but wasn’t, has at last been taken by the judiciary. So once again we are witnessing the judiciary stepping into the breach created by the executive’s inaction, or, to be precise, failure to act.

Having said that, it would be in order to suggest that perhaps the Forest Bench acted in pique while imposing a total ban on mining in Bellary district and ordering reparations to be paid by mining lease-holders for the damage caused to the environment last Friday. Instead of allowing exasperation to get the better of reason, the Bench should have taken a wider view of the problem of illegal mining without limiting it to one district in Karnataka. It should have also looked at the real, unstated reason behind illegal mining — apart from the profit motive — without addressing which the crime of looting the wealth of the Earth and destroying its forest cover cannot be halted. While Bellary has no doubt come to symbolise illegal mining, it is not the only place where natural resources are being extracted in violation of rules and laws.

If a total ban needs to be imposed till the problem is solved and controls firmly put in place, then it should apply to all mining activity across the country. The “systemic failure” which the Bench has highlighted while regretting that “mining regulators failed, forest regulators failed...” does not begin and end with Bellary; that failure’s adverse impact is being felt in every State which is endowed (or, as some would say after seeing the unrestricted loot, cursed) with mineral resources. If the situation in Bellary is frightening, it is equally scary in Odisha, Jharkhand and Goa, to name only a few States where illegal mining thrives at the expense of forests and indigenous people, enriching a few while pauperising millions.

The mining regulators have failed in these States, too, as have forest regulators. That failure, it needs to be stressed, is by design and not by default: Regulators are known to hanker for crumbs thrown their way by mine operators. There exist on paper severe restrictions laid down by the Mines Department of each of the States where ore is mined; so are tough rules framed by the Forest Department. Together, these restrictions and rules control the amount of iron ore that can be extracted and transported.

But the very fact that despite there being such restrictions and rules illegal mining flourishes is ample evidence of corruption at the level of officials who are charged with the responsibility of implementing them. A full and impartial inquiry into how firms that have long ceased to exist are allowed to extract ore from mines for which leases have long expired, how mining lease-holders are allowed to plunder ore after destroying forests on land beyond their leased areas, and how illegally mined ore is legally shipped from ports under the watch of Government officials in Odisha would help understand the extent of the menace.

Hence, little or no purpose would be served by limiting judicial intervention to one district of one State or restricting executive action aimed at imposing penalties on a group of mining lease-holders. If the 124 mining lease-holders of Bellary are to be penalised for the destruction they have caused to forest cover, so should the hundreds of others who ‘operate’ mines across the country. Anything less than that would be unfair and fall short of justice. Which is not to suggest that damage to the environment caused by illegal — as well as legal — mining should not be addressed and reparations imposed, but to appeal for a uniform application of penalties as deemed appropriate by the Supreme Court and implemented by the Government.

Which brings us to the root cause of illegal mining. Much, if not all, of the illegal mining of iron ore that happens is on account of escalation of demand in the international market. For instance, China’s insatiable demand for iron ore to fuel its rapidly increasing production of steel has led to a dramatic rise in the price of this natural resource. A quick estimate would show that the price of iron ore has escalated by leaps and bounds in the last seven years, which coincides with the spurt in China’s demand. Mining lease-holders now find it more profitable to export iron ore than to supply it to local producers of steel. And this shift is more than endorsed, in fact it is encouraged, by the Union Government as it adds fat to lean export earnings. It is of no consequence to the Ministry of Commerce, and presumably also the Ministry of Finance, that higher earnings through exports has created, what one steel factory owner describes as, “pressure on iron ore pricing in India”, thus increasingly placing our domestic steel industry at a disadvantage and stunting its growth, whereas it should really have been the other way round.

The solution to the problem, therefore, does not lie in imposing a ban on mining, but regulating it in a manner that India’s national interest is protected. Countries around the world now think in terms of securing their future by expanding the scope of security strategies to cover natural resources, including water and minerals. Unfortunately, the Government of India thinks in terms of somehow or the other increasing its export earnings to balance the books of a badly managed economy. India’s steel industry has long been demanding that iron ore exports should be either banned or made less lucrative through the imposition of heavy export duties. That would not only make illegal mining an unprofitable venture and protect forests from ruthless buccaneers but also ensure that domestic steel manufacturers are not faced with a situation where their principal strength, abundant availability of indigenous iron ore, will be diminished.

As the Supreme Court takes up the issue of illegal mining today, perhaps the Chief Justice and his fellow judges on the Forest Bench would want to look beyond Bellary. If the judiciary must intervene, let it force the executive to do what should have been done long ago: Either impose a ban on the export of iron ore or introduce an export duty that is so high that China and others will look elsewhere to fuel their steel industry. That way lies the path to solving a problem that has come to haunt all of India, not just Bellary district in Karnataka.

[This appeared as the main Editorial Page article in The Pioneer.]
Posted by Kanchan Gupta at 1:36 pm

India must questions itself whether it wants steel made in India with Indian ore or Steel made in Korea with Indian ore and then import it for our manufacture. But the Mittals, TATAs,Jidals,Bhushan,Ruias are not angels and they were using their clout with Judiciary and politicos to effect this ban.But the fresh steel mills are not being constructed due to environment concerns. so construct Mills in waste lands which have rail and road connectivity is the answer.

Remember the then famous 'Kudremukh Iron Ore Project' Iran abruptly refusing to buy ? BJP was not in power then.

Sand quarrying along riverbeds in Tamil Nadu has been taking place for many years orchestrated by none other than politicians. Tehsildars or conscientious law enforcers daring to prevent it have been instantly killed by well planned 'road accidents'.

Who can forget the unholy 'Sethusamudram Project' bringing in heavy machinery from Norway very much abetted with approval of Congress party.

Has anyone been punished so far ?