Taliban's barbarism in name of Islam 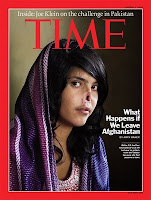 The August 9 issue of Time featured a cover story on the plight of women in those parts of Afghanistan where the Taliban enforce their barbaric interpretation of sharia’h. The magazine had a shocking picture on the cover: That of 18-year-old Aisha whose nose and ears were sliced off on the instructions of the local Taliban commander. Aisha was punished for running away from an abusive husband and parents-in-law.

UPDATE
The Taliban publicly flogged and then executed a pregnant Afghan widow by emptying three shots into her head for alleged adultery. Bibi Sanubar, 35, was kept in captivity for three days before she was shot dead in a public trial on Sunday by a local Taliban commander in the Qadis district of the rural western province Badghis. The Taliban accused Sanubar of having an "illicit affair" that left her pregnant.

Aisha’s story is symbolic of persecution of girls and women by the Taliban in the name of Islam. There are innumerable examples of young girls, some just past their puberty, being forced into marriage with members of the Taliban militia to serve as no more than sex slaves for the adherents of Deobandi Islam. Woe betide those girls who try to escape from their life of forced misery.

Jihad Watch provides a glimpse of what it calls “Unspeakable barbarism among the Taliban, the students of Islam.”
Time has raised a fundamental question: What happens if we leave Afghanistan?
That question has been posed from the American perspective, reflecting American concerns over US President Barack Hussein Obama’s plan to pull out troops from Afghanistan in the summer of 2011. But it’s a question that should really bother democracies across the world. The issue raised by Time has several aspects involving the liberty, rights and dignity of Afghans, especially women.

If the Taliban were to regain power in Aghanistan, as it seems likely with the US preparing to hand over control over Kabul to the Generals of Pakistan, then all those who claim to stand for freedom, liberty and dignity would stand indicted of complicity in this crime.

The years when the Taliban ruled Afghanistan will be remembered for the contempt with which Mullah Omar and his men trampled upon women’s rights. Not only were young and old women made to disappear under burqas, they were virtually banished to the darkest corners of their homes. Girls were prohibited from attending school. In the joyless world of ‘pure Islam’, along with music and art, women’s rights disappeared to as they were deemed to be ‘un-Islamic’.

That period of terror came to be symbolised by the public execution of two women in Kabul’s football stadium.

That was in the past. As for the future, a glimpse of what awaits Afghanistan has been provided by AP in this news despatch from Kabul on August 16:

KABUL, Afghanistan (AP) -- Taliban militants stoned a young couple to death for adultery after they ran away from their families in northern Afghanistan, officials said Monday. It was the first confirmed stoning in Afghanistan since the fall of Taliban rule in the 2001 US-led invasion.

When the Islamist extremists ruled Afghanistan, women were not allowed to leave their houses without a male guardian, and public killings for violations of their harsh interpretation of the Quran were common.

This weekend's stoning appeared to arise from an affair between a married man and a single woman in Kunduz province's Dasht-e-Archi district. The woman, Sadiqa, was 20 years old and engaged to another man, said the Kunduz provincial police chief, Gen. Abdul Raza Yaqoubi. Her lover, 28-year-old Qayum, left his wife to run away with her, and the two had holed up in a friend's house five days ago, said district Government head, Mohammad Ayub Aqyar.

They were discovered by Taliban operatives on Sunday and stoned to death in front a crowd of about 150 men, Aqyar said. First the woman was brought out and stoned, then the man a half an hour later, Aqyar said. He decried the punishment, which he said was ordered by two local Taliban commanders.

The ancient practice of death by stoning has been abandoned in all but a handful of countries. It is still a legal punishment in some countries, like Iran, which justify it under Sharia’h, or Islamic law.

Last month, Iran's religious authorities called off the planned stoning of a woman convicted of cheating on her husband. Sakineh Mohammadi Ashtiani's sentence -- which would have been Iran's first stoning since 2008 -- was lifted following a campaign around the world.

Two witnesses to the horrific double murder in the name of Islam told the BBC that the Taliban asked the villagers to attend the stoning through an announcement on loudspeakers in the mosque. "There was a big crowd of people... We were also asked to throw stones. After a while, the Taliban left. The woman was dead but the man was still alive... Some Taliban then came and shot him three times. The Taliban warned villagers if anyone does anything un-Islamic, this will be their fate.''

Anybody for ‘good’ Taliban?
Posted by Kanchan Gupta at 1:03 pm

barbarism is islam.islam is barbarism.

Pakistan used the C.I.A. to capture Taliban's Adbul Ghani Baradar because they wanted to shut down secret peace talks that Mr. Baradar had been conducting with the Afghan government that excluded Pakistan.

“We picked up Baradar and the others because they were trying to make a deal without us,“ said a Pakistani security official.

Yeah, we have our own Taliban, the khap panchayats! heh ?

Why no mention of them author ?

They too kill young couples who elope, don't they, author ????