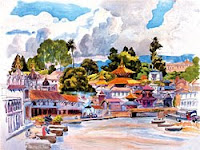 Kathmandu: The rain-drenched silver-green leaves of the birch outside my room shimmer in the late afternoon light which is rapidly fading as the slate grey sky turns inky black. The birch would have been in splendid isolation, squeezed between a ghastly apartment block and the refreshingly old world Shangri-La, but for the solitary weeping willow, its branches, lush with newly-sprung monsoon leaves, hanging low. Not much remains of the garden Desmond Doig, artist, story-teller and an editor much ahead of his times, had landscaped for the Shangri-La. That was some three decades ago after Junior Statesman was shut down and a heart-broken Desmond Doig moved to his beloved Kathmandu from Kolkata, the other love of his life.

Much of the open space in front of the Shangri-La has now been paved, a virtual parking lot for cars and SUVs. Maintaining a garden, that too one landscaped by Desmond Doig, is not cheap in these hard days as Nepal struggles to come to terms with political instability gnawing at the innards of an economy that was not healthy in the best of times which came to an end with the night of the long knives at Narayanhity Palace a decade ago. Desmond Doig did not live to see the decline and fall of the only Hindu kingdom of modern times, but his presence is felt at the Shangri-La in more ways than one. The coasters are imprinted with his pen-and-ink sketches of a Kathmandu that now exists in the nooks and corners of an over-crowded city; the stationery folder contains two picture postcards with his breath-taking watercolour painting of Shekha Narayan temple; and the lobby has huge framed drawings, possibly working sketches that he left behind in his studio at the hotel.

“No PM, no surprise, no shame!” runs the headline in The Himalayan, Kathmandu’s popular English language daily. The story is about the Constituent Assembly failing, for the fourth time, to elect a Prime Minister to head a coalition Government and steer the long-pending task of framing and adopting a Constitution for the Secular Democratic Republic of Nepal. After the storming of the Singha Darbar in 2006, the Maobadis, the Communist Party of Nepal (UML) and the Nepali Congress were quick to dethrone the King and declare the birth of a ‘new’ Nepal. But the ‘new’ Nepal still awaits a constitutional structure to set it apart from the ‘old’ Nepal and put the country firmly on the path of multi-party democracy.

The Maobadis, who have been operating under the banner of the UCPN (Maoist) after giving up their armed insurgency and joining mainstream politics, have never quite allowed themselves to be reconciled with their till-now unsuccessful revolution. Mr Pushpa Kamal Dahal and his comrades, backed by their People’s Liberation Army, had hoped to capture power and convert the Himalayan kingdom into a Communist state modelled along the lines of China; critics say they had dreamt of establishing a Pol Pot-like regime. Instead, they have had to contest elections and conform to the norms of parliamentary politics. Maobadis, like conservative Communists, may make a show of ‘internal debate’ but have neither the time nor the inclination for decisions arrived at through discussion and deliberation with the other main players in Nepal’s politics, namely the Nepali Congress and the CPN (UML). Nor do they concede the fact that someone not from their ranks could head the Government.

Therefore, it is not surprising that the Maobadis have done everything possible to hobble the Government of Nepal, such as it is, after Mr Dahal had to resign as Prime Minister following his unseemly spat with the President, Mr Ram Baran Yadav, over the Army chief refusing to allow the wholesale transformation of what used to be the Royal Nepal Army into the People’s Liberation Army by admitting to its ranks demobbed insurgents. Despite his best efforts, Mr Madhav Kumar Nepal, who succeeded Mr Dahal, found himself managing street agitations by the Maobadis instead of governing his country. The only decisive action he could take was to get the term of the Constituent Assembly, which was to expire this summer, extended for a year. A recalcitrant Prachanda has forced Mr Nepal to resign from office; for more than a month now he has been Nepal’s caretaker Prime Minister, waiting to hand over charge to a Prime Minister elected by the Constituent Assembly.

That wait has just got longer, with neither Mr Dahal, who wants to become Prime Minister again, nor Mr Ramchandra Paudel of the Nepali Congress, who believes that with the Maobadis and the CPN (UML) having failed to provide political stability, his party should now get a chance to lead the Government. On the face of it, Mr Paudel has a point: After all the Nepali Congress is far more experienced in dealing with political crisis and adept at the game of co-opting dissenters. It could succeed where both the Maobadis and the CPN (UML) have abysmally failed.

There’s a problem, though. The polls to elect a Constituent Assembly gave nobody a majority; the smaller parties, especially those representing Madhesi interests, are not easy to deal with; and, among the top three parties there’s virtually very little, if at all any, consensus on any issue of consequence, leave alone who should lead the Government. As much was evident last Friday when Mr Dahal polled 213 votes (of which 204 came from his party legislators) and Mr Paudel got 121 votes.

In the 601-member Constituent Assembly, this is way behind the halfway mark. From the votes cast against Mr Paudel it would seem the CNP (UML) is not on the same page with him. As the rule says the Constituent Assembly shall keep on voting till one of the contenders is able to secure a majority, the Speaker has called for a fresh election, the fifth, on August 18. A week is a long time in politics and much could change between my arrival in and exit from Kathmandu later this week. But those who should know are reluctant to hazard a guess.

Tail piece: The priests at Pashupatinath temple are not to be trifled with, as Kishen Thapa learned to his shock, pain and agony. Infuriated at Mr Thapa’s callous disregard of rites and rituals — he broke a coconut at the western gate of the hallowed shrine, which apparently is strictly not allowed — Harihar Bhandari, a temple priest, banged the puja thaali he was carrying on the pilgrim’s head. Mr Thapa is presently nursing a split scalp which required to be stitched up by doctors.
Posted by Kanchan Gupta at 11:21 am