This picture was taken at the Silda Eastern Frontier Rifles camp in West Midnapore district, West Bengal, after Monday's (February 15) raid by Maobadis, reportedly led by a woman Maobadi with the "eyes of a cobra". The Maobadi raid left 24 security personnel dead.

A marauding horde of Maobadis descended on Phulwaria Karasi village in Bihar’s Jamui district on Wednesday night and slaughtered 12 tribals. Reports say that the Maobadis have abducted several villagers. Their fate is not known.
On Monday, Maobadis killed 24 jawans of Eastern Frontier Rifles at Shilda in West Bengal's West Midnapore district. Many of them were charred alive. Crucial, actionable, real time intelligence input received by the West Bengal Police at least three hours before the attack was not passed on to the EFR camp.
The attack was led by a woman Maobadi, Jagari Baskey, who is said to have the “eyes of a cobra”. Maobadi leader Koteswara Rao, also known as ‘Kishenji’, who is in regular contact with mediapersons, issued a statement after the attack: “”We have attacked the camp and this is our answer to P Chidambaram’s Operation Green Hunt… unless the Centre stops this inhuman military operation we are going to answer this way only.”
Maobadis, coyly described as ‘Left-wing extremists’ by the Government of India but in reality thugs and criminals masquerading as champions of tribals whom they terrorise with guns, loot, rape and murder at will, now have a free run of at least 25 per cent of all districts in the country.
The worst affected States are Chhattisgarh, Odisha, West Bengal, Jharkhand and Bihar.
The much-touted and talked about Operation Green Hunt is yet to be launched. The Government’s hand, it would seem, is being held back by the Left-liberal intelligentsia which monopolises television studios and provides an ‘intellectual’ cover for Maobadi terrorism, romancing their criminal misdeeds and justifying murder in the name of Mao.
If the Union Government is hesitant to act against what the Prime Minister has repeatedly described as the “gravest internal security threat” which India faces, then State Governments, barring the Government of Chhattisgarh, have proved to be equally pusillanimous in their approach.
Bihar Chief Minister Nitish Kumar refuses to crack down on Maobadis. Jharkhand Chief Minister Shibu Soren is equally reluctant. Neither of them attended a recent meeting in Kolkata chaired by Union Home Minister to review the Maobadi situation in Bihar, Jharkhand, West Bengal and Odisha and work on a blueprint or inter-State coordinated action against Red terror.
Soren has agreed to free wanted Maobadis from prison to secure the release of an abducted BDO. The Union Government has conveyed its approval! Strangely, a Cabinet Minister, Mamata Banerjee, claims that there are no Maobadis and hence there is no need for police action. The Trinamool Congress is long suspected of being backed by Maobadis in rural West Bengal. A Trinamool MP, Kabir Suman, who sits in the Lok Sabha and has sworn to uphold the Constitution of India, has recently released a music CD extolling a Maobadi, Chhatradhar Mahato, now in police custody.
Just how grim the situation is can be gauged from what Chidambaram said while presenting his Ministry’s report card for January 2010:

“The situation in the States affected by Left Wing Extremism continues to be a cause of grave concern. The number of deaths in 2009 amongst civilians (591), security forces (317) and militants (217) indicated a rising trend. The increase in the number of incidents and casualties is not surprising because, after a review of the policy, State Governments decided to deploy a larger number of security forces and engage the naxalites in the districts dominated by them with a view to re-establish the authority of the civilian government. I expect this trend to continue in 2010.”

[Data regarding Maobadi violence can be accessed here. Assessments of the threat posed by Maobadis in various States can be read here.]
The time to discuss and strategise the state’s response to Maobadi terror is long past. The Government cannot be seen to be abdicating its primary responsibility of protecting citizens from criminal excesses. It must act with the fully fury of the state, and act now.

. Maobadis are thugs and criminals who deserve to be hunted down.
. Maobadis are pursuing the path of armed insurrection to overthrow the state.
. Maobadis do not respect human rights yet their protectors in the Left-liberal intelligentsia wax eloquent on the need to protect the human rights of Maobadis!
After such knowledge, what forgiveness?

The argument about fighting Maobadis with development is fallacious. Maobadis are the biggest impediment to development projects. They have been blowing up schools, hostels, health centres, roads and panchayat buildings, thus destroying crucial infrastructure for taking development to the rural hinterland inhabited by tribals. They are anti-development, yet claim they are fighting for tribal welfare! The photograph reproduced below is of a school building blown up by Maobadis in a remote area of Jharkhand -- it was the only school in the area. 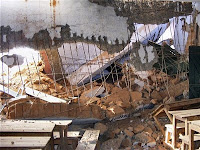 The Left-liberal intelligentsia’s demand that Government should talk to the Maobadis is absurd. What will the Government negotiate? The takeover of the Indian state by Maobadis? To allow them full control over vast swaths of Indian territory?
The Government’s response must be harsh, relentless and unforgiving: Two eyes for an eye; a jaw for a tooth. Terror must be met with overwhelming force. Jolawallahs should be asked to go take a walk, or join Khobad Gandi in his prison cell.
Unless the Maobadi menace is put down mercilessly now, we will end up with a situation similar to the one that prevailed in Sri Lanka till the LTTE was exterminated. Surely we don’t need a civil war to establish the primacy of the Constitution of India, do we?
What do you think?

Two get bail
Jamshedpur, Feb 20 (PTI) Two of the 14 people whose release was demanded by the CPI (Maoist) as a condition for the release of abducted BDO of Dalbhumgarh Prashant Layek were today granted bail by a court in Ghatsila here. Additional District Judge M M Singh granted bail to Jasmi Mardi and her father Bahadur Mardi after hearing the case, which was re-investigated recently following the directives from Home department of Jharkhand. Mardi's lawyer M Haque said the two were released on a bond of Rs 10,000 each and will be released from Ghatsila sub-divisional jail later in the day.
Referring to Mardi's case, Haque claimed they alongwith other accused were falsely implicated in the case by Jasmi's husband Ramrai Hembram, a police constable, following the murder of Hembram's brother Dukhia Hembram last year.
Layek, who was kidnapped by Maoists from his office in Dalbhumgarh on Saturday last, was released yesterday at Hadian village under Ghatsila sub-division.
Picture below shows the kidnapped BDO Prashant Lakak with a Maobadi at Ghatshila:

Rs 25 lakh demanded for safety of BSNL towers
Rourkela (Orissa), Feb 20 (PTI) In a letter, written by the Maoists, the rebels have threatened to blow up BSNL's mobile towers at Maoist affected Biramitrapur in Sundargarh district, if the authorities did not pay Rs 25 lakh. B K Jog, general manager, BSNL Rourkela, today said an open envelop containing the letter was found from the commercial section of the office.
The letter written in Oriya with red ink was not addressed to any officer of the department. After receiving the letter, the GM said he has requested the superintendent of police to investigate. The police said an investigation has been ordered to verify the authenticity of the letter.
Posted by Kanchan Gupta at 12:12 pm

The hand that holds a gun, threatening the state, must be cut down.

Why so we give so much importance to Human Rights activits? I listened to the Barkha Dutt's show on Nxala menace and I wondered why even allow human rights personnel to even voice their opinion or even if we give them the freedom to voice their opinion, why do we even allow them to question any govt action/inaction. Tahts should be done by the elected members of parliament, media and the judiciary.

I replied to ur tweet on the same link (@anandd29). Wish the extermination can be done as easily as we wish.
Ovah here I really wish I knew jus one reason why the state wont end this terror asap.

Our governments have long stopped giving protection to the common man. The unfortunate victims are caught between two devils. One devil is criminals like `left-extremists'and `jihadis'. The other one is the govrnment itself.

Thank God , you (Kanchan Gupta) clearly call it a problem confronting India . And condemn the cruel callous loss of lives of our Jawans. And that we simply cannot afford a parallel violent movement dictating to the State.

I am sick of these various rent a cause human rights organizations. Who only hasten the enfeebling of our nation's security.

Is there any difference at all between taliban & maobadis ?

I wonder why these human rights activists go to Afghanisthan, Pakisthan, China or Saudi where they are required more.

Extremel well put. I really respect your frank and no-nonsense opinion. Keep it up boss.

Brilliant solution Kanchan. Going by your 'Two Eye For an Eye, a jaw for a tooth philosophy", almost the entire world would be wiped out in a few days. Consider this, i slap you for some dumb disagreement and using your philosophy you slap me twice, in return using your philosophy again i slap you four time, using your philosophy you punch me 10 times... and so it goes on till one of us has the commonsense or anger to use a gun... so you see, a slap will cause the end of the world as we know it...
Brilliant and incisive... love your frankness and to the point attitude... Kudos to you for your perfect common sense, afterall, "na rahega baas, na bajegi bansuri". This will solve all of the World's problems. Boy, you should be given the Nobel peace prize.