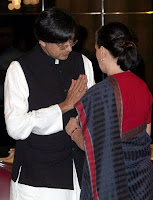 It won’t surprise me at all if Mr Shashi Tharoor is hopping mad at me. But for my question, asked without any malicious intent, he would not have got into trouble with his party bosses and the Congress would not have gone into a tizzy. Let’s rewind to Monday, September 14. While scanning the Twitter-world from my TweetDeck I spotted our Minister of State for External Affairs exuberantly tweeting about his “fortnightly golgappas & chhole bature at Bengali Sweet House” and how he “was assailed by cameras”. Now that’s in keeping with party-dictated austerity in these hard times, I told myself, and dashed off a tweet addressed to him, which read, “@ShashiTharoor Tell us Minister, next time you travel to Kerala, will it be cattle class?” I must admit that I was quite surprised to receive a tweet from him in reply: “@KanchanGupta Absolutely, in cattle class out of solidarity with all our holy cows!” I imagined him having a hearty laugh while typing out the tweet; I had a good laugh, too. And then forgot all about it.

On September 16, the tweets exchanged between Mr Tharoor and me were reproduced on the front page of Indian Express, although I was not identified as the person who posed the question. The newspaper also had an editorial on his seemingly casual comment on austerity made in a flamboyant, offhandish manner. Predictably, the Congress’s spokesperson — Ms Jayanthi Natarajan was briefing the Press that afternoon — was asked to comment on Mr Tharoor’s tweet and, equally predictably, she launched a broadside against him. The use of the phrase ‘cattle class’ had hugely upset the party, she told mediapersons, and such callous disregard for sensitivities was not acceptable. By then Mr Tharoor had left for an official visit to Liberia and Ghana, and couldn’t have possibly been summoned for an explanation. Sniffing for a story in an otherwise silly season, newspapers and news channels went to town with the Congress’s response to Mr Tharoor’s tweet. The rest is, as the cliché goes, history.

It is not for me to defend either Mr Tharoor or his party’s reaction; having knowingly stepped into what Amitabh Bachchan colourfully described as the “cess pool” of politics, he should know how to look after himself; if he doesn’t, tough luck. But I do get the sense, as do many other fellow journalists, that our ebullient first time MP-turned-Minister in a high profile Ministry has rubbed too many of his party colleagues the wrong way. Politicians who have worked their way up the ladder don’t take to paratroopers kindly, especially when the latter grab disproportionate media attention. What has also worked against Mr Tharoor is that he has been at the centre of a series of controversies which, for any other politician, would have proved to be disastrous. Not so for Mr Tharoor: On each occasion he has craftily used the media to portray himself as the innocent victim of malicious conspiracies and diabolical plots. Years spent at the UN have taught him the art of converting adversity into advantage.

What life in the UN, where top bureaucrats are constantly trying to trip their colleagues to jump the queue, has clearly not taught Mr Tharoor is that politics isn’t about cutting deals in committee rooms or playing little games of one-upmanship. It is, therefore, not surprising that he should find himself in splendid isolation within his own party, with nobody, including fellow Congress MPs from Kerala, standing up for him as he is pitilessly pilloried by Ms Natarajan who is incensed, as are other Congress worthies, among them Rajasthan Chief Minister Ashok Gehlot, over his inclusion of the expression ‘cattle class’ in his tweet. Nor is anybody particularly pleased that he feels compelled to travel ‘cattle class’ out of “solidarity with all our holy cows”. On Friday evening, the Prime Minister tried to come to Mr Tharoor’s rescue by stating the obvious: The tweet was a joke and need not be taken seriously. When asked for his comments, Congress general secretary Rahul Gandhi pointed out that the party (as opposed to the Prime Minister) had already made its position clear.

In an effort to keep the story going till something else comes up, newspapers and news channels are now busy speculating whether the Congress will take punitive action against Mr Tharoor; if yes, then when. Much of it could prove to be no more than idle speculation. But it would be a pity if he were to be punished for a tweet, no matter how cheekily offensive it may appear to our home-grown politicians. Mr Tharoor has said and written far worse to merit retribution for something which is at best a sarcastic comment on dubious austerity.

Ms Natarajan and her bosses are perhaps unaware of the contents of Mr Tharoor’s book, India: From Midnight to the Millennium and Beyond, in which he takes a rather dim view of the Nehru-Gandhi dynasty. He is particularly scathing about Mrs Indira Gandhi: “Had Indira’s Parsi husband been a Toddywalla (liquor trader) rather than so conveniently a Gandhi, I sometimes wonder, might India’s political history have been different?” According to Mr Tharoor, “Mrs Gandhi was skilled at the acquisition and maintenance of power, but hopeless at the wielding of it for larger purposes. She had no real vision or programme beyond the expedient campaign slogans; ‘remove poverty’ was a mantra without a method...” For him, Mrs Gandhi’s “visionless expediency” was her “only credo”. And on Mrs Gandhi’s Emergency he wrote: “Indira arrested opponents, censored the Press, and postponed elections. As a compliant Supreme Court overturned her conviction, she proclaimed a ‘20-point programme’ for the uplift of the common man. (No one found it humorous enough to remark, as Clemenceau had done of Wilson’s Fourteen Points, that ‘even the good Lord only had ten’.) Its provisions remained largely unimplemented. Meanwhile, her thuggish younger son, Sanjay (1946-1980) emphasising two of the 20 points, ordered brutally insensitive campaigns of slum demolitions and forced sterilisations.”

The book was published in 1997. He revised it 10 years later. Between 2007 and 2009, his views on the dynasty may have changed radically. That’s for him to say and prove. But what remains on record would have been considered sufficient by the Congress ‘high command’ to shut the doors on anybody else. Let us not forget that Mr Pranab Mukherjee, a diehard Indira loyalist, was expelled from the party in 1984 for not being sufficiently enthusiastic about Rajiv Gandhi’s elevation as Prime Minister following Mrs Gandhi’s tragic assassination. Others have found themselves out in the cold for far less and have twittered miserably to crawl back into favour. In Mr Tharoor’s case such transgressions have been overlooked. A tweet is nothing in comparison.

UPDATE [22/09/09]
Tharoor meets Sonia, PM, Pranab: Party asks him to be cautious
Shashi Tharoor met Congress President Sonia Gandhi and Prime Minister Manmohan Singh to give his explanation and was asked by the party to be cautious in his comments and actions. Soon after his return from Liberia and Ghana where he was on an official visit, Tharoor met Sonia Gandhi amid demands for his resignation as Minister of State for External Affairs.Later he met Singh and senior Congress leader and Finance Minister Pranab Mukherjee. He is understood to have given an explanation about his "cattle class" tweet. A glum-faced Tharoor did not speak to waiting mediapersons after his meetings with Sonia Gandhi and Mukherjee.Party spokesperson Shakeel Ahmed later said "any well-wisher of the party, Government and Tharoor will advise him to desist from any comments or action even jokingly that would hurt the sentiments of the common man." (PTI)
Posted by Kanchan Gupta at 12:51 pm

What riled the Congress leadership was not "cattle class" but the "holy cows" part of the comment. Tharoor of course meant "holier-than-thou cows."

He's getting his comeuppance.

Well, you sure seem to want to give the man more trouble :-). I don't think anybody in the Congress reads books; now thanks to you ...

Tharoor has a penchant for getting into soups, with or without anybody's help, you need not feel guilty about that!

Tharoor obviously was prompt in his reply and in Tweeter no sensible person has the right to expect him post replies as a minister. He has another identity and our(or his) self-important bosses should be gracious and generous enough to give that identity a space. Your assessment might be right; Congress does not seem to have enough spine to clip Tharoors wings.

Kanchan Ji it is best to ignore Shashi Tharoor

"It is not for me to defend either Mr Tharoor or his party’s reaction";
why? I would definitely like to have your opinion.

Sonia / Congress foold all - again - by focus on Tharoor. Rahul Ghandi got positive coverage and front page news / photos for his fakery / stunt to Jalandhar but just 3-line news item for Rs 1 cr spent on the trip to TN. Get away from this bogus story abd focus on real one(s).

Assembly Tickets for Daughetrs of Munde and Mahajan.

BJP on fast track of aping the bad aspects of Congress! As shameless as in other party in promoting kids! The icing on Kalakand will be ticket to Pratibha Advani for Gandhinanagr!

I am suspecting Congress is propping up Kalavati and RPI to split anti-incumbency vote.

Tharoor´s a born liar. Every tweet he writes is show business and can be analysed as a game of upping himself. This babu has no compassion and is there because the powerful Sai Baba lobby supports him.