So, Congress wants to cut a deal with Taliban! 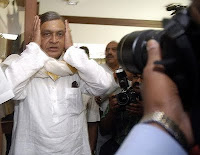 The venerable Wall Street Journal, which still takes the business of journalism seriously, has carried an interesting news story in its Wednesday’s edition. Headlined “Indian Minister Urges Afghan Political Settlement”, it is based on an interview with Minister for External Affairs SM Krishna, who apparently spoke to the writer, Joe Lauria, on the sidelines of the UN General Assembly, which is now in session. The opening paragraph of the story is truly attention grabbing: “India, one of the biggest investors in Afghanistan, believes there is no military solution to the conflict in that country and that NATO combat operations should give way to a political settlement with the Taliban, according to Indian Foreign Minister SM Krishna.”

The newspaper quotes Mr Krishna as saying, “India doesn’t believe that war can solve any problem and that applies to Afghanistan also... I think there could be a political settlement. I think we should strive towards that.” According to the daily, Mr Krishna “dismissed suggestions that India’s growing involvement in Afghanistan is intended to encircle Pakistan, a fear prevalent in some circles in Pakistan. ‘I think that is a baseless allegation,’ he said.” Mr Krishna, in his interview, “charged that Pakistan’s disruptive role in the Taliban insurgency continued”, and said “the military situation in Afghanistan was complicated by the ongoing aid for the Afghan Taliban provided by Pakistan’s Inter-Services Intelligence (ISI) agency”.

A full reading of the news story and the extensive quotes of the Minister published alongside would reveal that he has not suggested a “political settlement with the Taliban”, at least not in so many words. But it is only logical to deduce that this is what he meant when he talked of a “political settlement”. Given the political reality of Afghanistan where the Taliban are determined not to allow democracy and modernism to take root, and want the country to return to the joyless, dark days when a one-eyed monster called Mullah Omar ruled that benighted nation with ruthless force in the name of Islam, the only people you can strike a deal with and come to a “political settlement” are the Taliban.

“If India can work happily with Great Britain after they having ruled us for so long, it only shows that we can play the game,” Mr Krishna told The Wall Street Journal. That is an allusion which only the naïve would miss or misinterpret. In interpreting foreign policy, each word, especially when uttered by the Foreign Minister of a country, is dissected many times over. And the most casual reading of Mr Krishna’s comments would suggest that they indicate a major shift in the Government’s policy on Afghanistan and a break with the national consensus that has helped its evolution: The Congress-led UPA is now willing to “play the game” and cut a deal with the Taliban.

What Mr Krishna has also signalled is the UPA Government’s rethinking on American involvement in Afghanistan. Till now, although India has steered clear of the US-led military intervention in Afghanistan, it has been a beneficiary of everything that has followed the fall of the criminal Taliban regime and the installation of the Government headed by President Hamid Karzai. New Delhi would not have been able to reopen its mission in Kabul and set up consulates elsewhere had Mullah Omar still been in power. Nor would India have been able to re-establish its people-friendly profile among the Afghan masses through infrastructure development and healthcare projects.

It would be foolish to believe that the ‘Indian presence’ in Afghanistan will remain untouched and undiminished if the US and NATO troops were to abruptly pack up and leave that country. A “political settlement” — or, to put it more bluntly, a deal with the Taliban — may please those in the UPA Government who believe Islamism is a benign idea and Islamists are the natural allies of ‘secularists’, but it will be disastrous for India and its national interest.

Since Mr Krishna is the Minister for External Affairs, we must presume that whatever he has told The Wall Street Journal, as well as the implied meaning of his statement, reflect current thinking in South Block. More important, since Mr Manmohan Singh unilaterally frames foreign policy these days, Mr Krishna’s comments must be taken to reflect the Prime Minister’s views — unless they are refuted or denounced by the Government’s drum-beaters in the media. It may not be entirely coincidental that the Prime Minister’s prescription for redrafting India’s policy on Afghanistan bears close resemblance to the current thinking in Washington, DC.

As US President Barack Hussein Obama watches his much-touted AfPak policy unravel, his strategists work overtime to convert the 21st century’s Great Game into a Grand Bargain. Mr Obama spoke of a ‘surge’ in the deployment of US troops, but there are as yet no signs of 40,000 more Americans being sent to win the war against the Taliban. And while policy-makers in the Obama Administration dither, Gen Stanley McChrystal, the top US and NATO commander in Afghanistan, has submitted a ‘confidential’ report — whose contents have been leaked to The Washington Post! — to the American President, underscoring the problems posed by “inadequate resources” at his disposal. “Failure to gain the initiative and reverse insurgent momentum in the near-term (next 12 months) — while Afghan security capacity matures — risks an outcome where defeating the insurgency is no longer possible,” he has said.

While Gen McChrystal has made a case for the immediate deployment of additional soldiers to bolster the presence of 64,000 troops in Afghanistan, Pentagon appears to be divided on the issue. It would like Mr Obama to take a political call on whether to go ahead with the ‘surge’ or begin pulling out troops from Afghanistan, and then strategise on the next steps to be taken. Interestingly, Gen McChrystal is also believed to have said in his report that “while Indian activities largely benefit the Afghan people, increa-sing Indian influence in Afghanistan is likely to exacerbate regional tensions and encourage Pakistani countermeasures in Afghanistan or India”.

That’s an understatement, but it nonetheless accurately reflects the Afghan reality which is intimately enmeshed with the reality of Pakistan’s ‘strategic depth’ policy that visualises Islamabad’s control over Kabul with the Taliban’s help and the imposition of Islamist absolutism. In such a scenario, it is amusing to think of the UPA Government cutting a deal with the Taliban.

[This appeared as the main article on the edit page of The Pioneer on Wednesday, September 25, 2009. The same day, alarmed by the possible fallout of SM Krishna's comments, the MEA spokesperson issued a statement, saying, "The Minister has been misquoted in his interview with The Wall Street Journal." A classic example of the adage -- What did the politician have for lunch? What he said at breakfast! A related news story of interest in The Wall Street Journal which appeared a day later: Dubious Afghan Vote Drove U.S. to Revisit Strategy.]
Posted by Kanchan Gupta at 3:23 pm

The nation is ruled by Traitors, Foreign agents and thugs.

None among the 543 Loksabha members are Nationalists.

All are willing to sell the nation at the available opportunity.

They will soon get that opportunity.

Our Nation is DOOMED, Slavery is soon to once again become our destiny !.

The USA will fall, If not now then in the next 2 years.

There is no recovery from their recession, there is only Collapse.

The Trillions of dollars of Stimulus package courtesy China as a gift to Obama is only delaying the Inevitability.

Along with the USA will fall India the puppet state of USA courtesy the Banker from World bank and the Bar Women thug from Italy.

Fear the Red Army from China.

While the "SECULAR" India is busy pampering their Minorities over the past decade, China has done the following

a. Become the largest Indusrial nation of the China.

c. Built the worlds largest Transport medium in Tibet to ferry millions of Troops to their future invasion of India.

Meanwhile, India courtesy the world bank banker and the Italian Thug are signing the final nail on the Indian coffin by signing the NPT and CTBT pushed by the failing nation USA pushed by indirectly by China.

Once India does the NPT/CTBT, Chinese Invasion follows.

Meanwhile, across my neighbourhood the 150 Million "MINORITIES" of India were bursting crackers on the news that the Pakistan cricket team has won the match against WestIndies.

No guesses as to what will be the future.

I am talking the truth and I will be abused soon.

And, Indian Nationalist was there to count crackers by those 150m people! LOL~ No wonder, this crowd with such views stands fully discredited among larage no. of Indians of all colors.

Anonymous like his name is another traitor that secretly knows that I am telling the truth......The truth is that if India had got rid of the Muslims atleast in 1947 then our situation would have been a lot better today.

Gandhi and Nehru screwed India even before their death and let us suffer for a 1000 1000 years.

Why is India involving itself in Afghanisthan? As if infrastructure/roads etc etc are in excellent shape within India((

Let us remember Taliban was spawned by Benazir not Musharraf.

Amidst severe constraints Musharraf DID sincerely want to wean his country away from obscurantism & tried as best as he could.

India has always been the "puppet state" of Russia. Recall what Mitrokhin archives had to say:

On second thoughts , nothing surprising there.We tenaciously & mulishly delude ourselves into believing our so called " leaders & policymakers " are Harishchandras despite what our heart whispers to us.

Whatever be the arguements against , I DO admire Sonia Gandhi for brilliantly checkmating & disabling the formidable leftists of India (bardhansyechurysjyotibosuskarats)

No one else not even Modi would have been able to it.