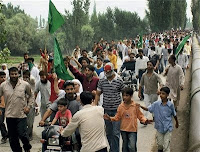 American interventionism as policy
By Kanchan Gupta
US President-elect Barack Hussein Obama’s utterances on Jammu & Kashmir, indicating that the so-called ‘Kashmir issue’ will figure on the agenda of his Administration, just as it featured on the ‘To Do’ list of Mr Bill Clinton during his first term as President, have raised more than eyebrows in India. To his credit, President George W Bush had steered clear of the ‘Kashmir issue’; he snubbed Pakistan each time it tried to push for a revival of American interventionism, insisting that Islamabad had to deal directly with New Delhi. Even Gen Colin Powell, with his pronounced pro-Pakistan bias, could not get Mr Bush to change his view and send in Nosy Parkers from the State Department to play their insidious games. Recall a busybody called Ms Robin Raphael whom Mr Clinton promoted during his first presidential term to ‘solve’ the ‘Kashmir issue’. She used the opportunity to forge the All-Party Hurriyat Conference with disastrous consequences in Jammu & Kashmir, and colluded with Benazir Bhutto to create the monster called Taliban in the hope Mullah Mohammed Omar would look after Unocal’s business interests.
With the shadow of American interventionism as policy looming large, it would be instructive to scan the past, if only to figure out the genesis of the West’s proclivity to interfere in an issue that neither impacts it directly nor does it understand entirely. Interestingly, much before the US decided to get into the act, it was the UK which manipulated events in a manner that whetted Washington’s appetite. Equally interesting is the reason that shaped Anglo-American perception and policy on Jammu & Kashmir, which does not figure in much of the discourse on this issue but has been presented in great detail by former diplomat C Dasgupta in his path-breaking book, War and Diplomacy in Kashmir — 1947-48.
First, some bare facts. Maharaja Hari Singh signed the Instrument of Accession on October 26, 1947, making Jammu & Kashmir an integral part of India. Simultaneously, Indian forces were airlifted to Srinagar to evict the Pakistani invaders and establish India’s sovereignty over its territory. The accession was — and remains — entirely valid in terms of the Government of India Act of 1935 and India Independence Act of 1947; it is total and irrevocable in international law. Speaking in the UN Security Council on February 4, 1948, the US representative, Warren Austen, said: “The external sovereignty of Kashmir is no longer under the control of the Maharaja... with the accession of Jammu & Kashmir to India, this foreign sovereignty went over to India and is exercised by India and that is why India happens to be here (at the UNSC) as a petitioner...”.
India went to the UN in good faith after Pakistan refused to vacate territory occupied by its armed raiders. In its formal reference, lodged with the Security Council on January 1, 1948 under Article 35 of the UN Charter, which permits member states to bring any situation whose continuance is likely to endanger international peace and security to the attention of the Security Council, India asserted: “Such a situation now exists between India and Pakistan owing to the aid which invaders, consisting of nationals of Pakistan and of tribesmen from the territory immediately adjoining Pakistan on the North-West, are drawing from Pakistan for operations against Jammu & Kashmir, a State which has acceded to the Dominion of India and is part of India... The Government of India request the Security Council to call upon Pakistan to put an end immediately to the giving of such assistance which is an act of aggression against India.”
In the reference, India also asserted its right, under international law, to self-defence by initiating military action against Pakistan by way of what is today termed as ‘hot pursuit’: “In order that the objective of expelling the invader from Indian territory and preventing him from launching fresh attacks should be quickly achieved, Indian troops would have to enter Pakistan territory...”.
In addition to the five permanent members, the UNSC in 1948 had Argentina, Belgium, Canada, Colombia, Syria and Ukraine as non-permanent members. The instant reaction of the UNSC was to issue a Presidential Statement on January 6, 1948, making an “urgent appeal (to India and Pakistan) to refrain from any step incompatible with the (UN) Charter and liable to result in an aggravation of the situation”. This was followed by Resolution 38 on January 17, 1948, reiterating the Presidential Statement and requesting both countries to immediately report to the Security Council any material change in the situation.
Across the Atlantic, the Commonwealth Relations Office entered the picture at this point, formulating a political perspective that came to greatly influence the Security Council’s subsequent handling of the ‘Kashmir issue’, at least up to the formation of the UN Commission for India and Pakistan. The CRO’s perspective was rooted, and strangely so, in the British Foreign Office assessment of the emerging political crisis in West Asia. Britain in those days stood accused by Arabs (and their sympathisers in Europe and the US) of having abjectly failed in its Mandate over Palestine as it had been unable to control the immigration of Jews. Britain was also seen as having failed in its responsibility to prevent or contain the outbreak of what was then referred to as ‘civil war’ (which still continues to rage between Palestinians and Israelis).
Britain took the Palestine issue to the UN in April 1947 and announced its decision to abandon its mandate by May 1948. The UN General Assembly immediately adopted a Resolution for dividing Palestine into separate Jewish and Arab states, paving the way for Israel’s re-birth as the homeland for Jews in Palestine and the Diaspora. The Arab reaction was vicious, instantaneous and directed in bulk against Britain.
(Tomorrow: Linking the ‘Palestine issue’ to the ‘Kashmir issue’.)