The magic man of technology 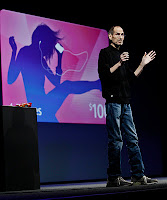 “No one wants to die. Even people who want to go to heaven don’t want to die to get there. And yet death is the destination we all share. No one has ever escaped it. And that is as it should be, because Death is very likely the single best invention of Life. It is Life’s change agent. It clears out the old to make way for the new,” Steven Paul Jobs. (February 24, 1955 – October 5, 2011.)

But for the humble apple Earth would have been a desolate planet, our understanding of gravity would have resembled that of Chief Vitalstatistix and the alphabet ‘i’ would never have achieved iconic status. Eve offered Adam a luscious apple, tempting him to surrender to the serpent of desire and commit the original sin. An over-ripe apple fell on Newton’s head on a lazy Cambridge afternoon, jolting him to the reality of gravity. And then came Steve Jobs’s Apple in rainbow colours, heralding the arrival of technology.

Few would remember it today, or care to recall, that the first logo of Apple Computer Co, set up by Jobs and his school friend Steve Wozniak on April Fool’s Day in 1976, was a black-and-white label that showed Isaac Newton reading a book under the famous apple tree of Cambridge. It was a copied lithograph and understandably didn’t meet Jobs’s exacting standards of aesthetics. That logo was dropped a year later for the ‘Apple’ which now has become a cult symbol. The rainbow colours were swapped for a translucent expanse in 1998. Very Buddhist, very minimalist, very Jobs.

Contrary to popular notion, Jobs never designed a computer, or any other product from the Apple stable, in his life. He conceived ideas, and then had them transformed into minimal machines with maximal performance. As a grieving fan tweeted after hearing of Jobs’s death on Thursday morning, “Jobs was an artist. He put himself in your shoes and looked at the world through your eyes. And gave you what you wanted. That was his magic.”

Jobs was technology’s magic man, connecting individuals, societies and the world in a manner nobody could have ever imagined. Bill Gates and his Microsoft may have made the PC popular, but his machines and software lacked the chutzpah of Apple. To Jobs (and Wozniak) goes the credit of putting the first personal computer in the market and set the trend with Macintosh. Microsoft followed. Jobs was ever mindful of this fact and once famously retorted: “I wish Bill Gates well. I only wish that at some time in his life he had dropped acid or spent time at an ashram.”

Hallucinating drugs, possibly acid, did play a role in Jobs’s early life. His acute sense of aesthetics — reflected in the grace of every Apple product, from MacBooks to MacAir to iPods, iPhones and iPads, and their flawless operating systems — may have come from the days when he experimented with flower power and Indian mysticism, although it never endeared him to India or Indians. After dropping out of college he hippie-d around for a while, making a ‘living’ returning Coke bottles which fetched him five cents apiece. On Sunday nights he would “walk the seven miles across town … to get one good meal a week at the Hare Krishna temple. I loved it.”

Many American dropouts, in flowing robes and long hair, came looking for moksha in India during the mid-1960s and early-1970s. So did Jobs along with his friend Kottke. Apparently, he wanted to seek enlightenment from Neem Karori Baba. That encounter between the worshipper of Hanuman and a callow American searching for the higher truth never took place as Baba left this world of mortals before Jobs reached his ashram.

Little is known about what transpired thereafter. But Jobs did not leave India with either happy memories or an enlightened mind. What we do know is that he found India “intense and disturbing”. His biographer records: “We weren’t going to find a place where we could go for a month to be enlightened. It was one of the first times that I started to realise that maybe Thomas Edison did a lot more to improve the world than Karl Marx and Neem Karori Baba put together.” Jobs never looked back at India. In fact, he never looked at India. He simply ignored this country, its expertise in technology and its vast, virtually insatiable, market.

Yet, had it not been for that presumably disastrous trip to India, that realisation would perhaps have eluded Jobs and technology would have been deprived of a brilliant, if arrogant and rude, innovator. We would think of Adam and Eve having a roll in the Garden of Eden or a bored Newton dozing over a book whenever we saw an apple, but we would have never connected it with the music we hear, the computers we use and the phones that have made life that much easier.

I have heard some of Apple hardware is made in Hyderabad. Not sure though.