Madman on the loose 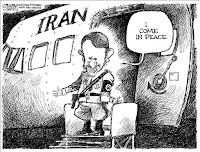 On Thursday, Iran's Islamofascist President Mahmoud Ahmadinejad was in full flow at the UN General Assembly which is currently in session.

Misusing the platform that is provided to all member-states of the UN, Ahmadinejad delivered, what can only be described as a hate-laden speech, spitting venom at the Christian West, Jewish Israel and 'non-believers' belonging to all other faiths.

He was not speaking on behalf of the Islamic Republic of Iran alone, but the entire ummah when he

. charged Americans with stage-managing 9/11
. accused the US of conniving with Osama bin Laden
. questioned the veracity of the Holocaust
. blamed 'Zionists' for the woes of the world
. virtually called for the extermination of all those he listed as foes.

A madman on the loose is a threat to the world. A madman who could soon have nuclear weapons in his arsenal is a danger to humankind and human civilisation.

Only those given to unmentionable perversions of the mind and body would find merit in Ahmadinejad's bilious speech which epitomises Islamofascism.

Those nations which value democracy, freedom, liberty and peace would shame and shun a rabid pariah like Mahmoud Ahmadinejad.

Iran is welcome to have him as its President. The mullahs of Iran are welcome to their favourite boy.

But the world, including India, must deny him -- and those who support him or endorse his rant -- both legitimacy and space.

Yesterday Iran's head muppet called America and her allies villainous oppressors; tomorrow, on Friday, the 30th of September, the Iranian regime is scheduled to take the life of Youcef Nadarkhani for the crime of apostasy from the state religion:

All this while an American "hiker" dutifully acts the role of useful idiot, echoing the Islamist-apologist narrative of American intransigence --- and simultaneously al-Queda scolds the aforementioned Iranian arch-muppet for his claims that their greatest achievement, the "razzia" on New York City, was instead an inside job committed by Americans themselves.

Oh, yes, and the icing on the cake - threatening to send their navy, which is barely functional and has zero "blue water" experience, completely across the Atlantic to harass America's East coast.

Their hypocrisy is rivaled only by their insanity.