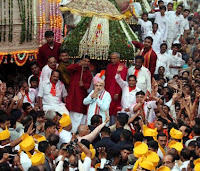 The juggernaut moves on

The venerable Economist has finally taken note of what is common knowledge in India: Gujarat is racing ahead of the rest of the country. The credit for Gujarat's booming prosperity which has benefited all communities (Muslims included, lest the point be missed or lost in the cacophony of Left-liberal rant)should go to Gujarati entrepreneurship and Chief Minister Narendra Modi's visionary leadership.

Here are two telling excerpts from the report, headlined "India's Guangdong",published in the latest issue of the Economist:

These days Gujarat accounts for 5% of India’s population but 16% of its industrial output and 22% of its exports. Its growth has outpaced India’s (see chart) and it wins accolades from business people. A recent comparison of Indian states by McKinsey, a consultancy, waxed lyrical about Gujarat. It might yet play the role of industrial locomotive for the country, as Guangdong province did for China in the 1990s. There is lots of excited talk about exporters switching from China to India...

Gujarat could be a vision of India’s future, in which manufacturing flourishes, soaking up rural labour. Its economy is expected to grow by double digits, even as India’s rate slows to 7-8% this year...

The Congress, of course, would brush aside the Economist's assessment, insisting 'poverty in an entitlement-driven India is better than prosperity in a entrepreneurship-driven Gujarat'. Recall how the party and its pseudo-secular drum-beaters, among them the Left-liberal intelligentsia and the intellectually bankrupt Delhi Commentariat, once argued that 'corruption is better than BJP' while propping up the Jungle Raj of Laloo Prasad Yadav in Bihar.

I can almost hear Teesta Setalvad and Arundhati Roy ranting -- the first in television studio debates which increasingly look like WWF matches, the second through 10,000-word essays in Outlook and Frontline -- that it's all a Right-wing conspiracy. What would the poor (and I don't mean so literally) sods do if India were to say goodbye to all that is wretched with our economy, and hence our society and polity?

It's a pity that the Delhi4 are yet to recognise what the world has begun to hail as India's biggest (and only) success story since 2004: NaMo's leadership and its consequent bounty of riches for Gujarat. And reconcile themselves with the reality. But then again, D4's reading habits are restricted to Times of India, possibly Hindustan Times, and Dainik Jagran. These publications provide stimulating fodder for their addled minds.

Meanwhile, our 'economist' Prime Minister should check out the latest issue of the Economist for a reality check on which way is India headed under the NAC's tutelage and which way is Gujarat headed under NaMo's leadership.

[Also see 'Gujarat shows astounding growth in female literacy': NaMo leads from the front to educate the girl child. By Ashiya Parveen.]
Posted by Kanchan Gupta at 11:57 am

Well worded dada. It is time that this Sarkar Raj ended.

I believe the secular's in India would not want the development as they would only thrive on the sweat and blood of a bharatiya praja!

Great Social thinker, Mr Yogendra Yadav will not agree.As per him,NAMO cleared Tata's NANO in 3 days.That is SEMI DEMOCRACY.All projects must wait for atleast a decade to be fully democratic as per him.He says, no labour laws are implemented in Gujarat, hence there are no strikes or lock outs.
All these laws were APROPERLY IMPLEMENTED IN WB.So we have permenent lock out there, of The Left!
" D" company in Delhi is trying its best to thwart NAMO, but his advent is foregone conclusion.Wait for 2014.

you give modi credit for the famed gujarati entrepreneurial spirit and proximity to bombay?