RIP, News of the World 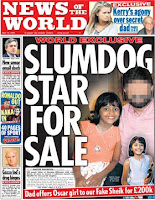 But what about our desi media?

When it was launched in London on October 1, 1843, the promoters of News of the World were absolutely clear about what the paper would not be: A dull, high-brow publication meant for the country squire and his fox-hunting mates to pander to their snobbery and pretentious intellectual superiority. The toffs had their The Daily Universal Register which later metamorphosed into The Times and The Sunday Times and other such newspapers that catered to the posh. What was needed was a Sunday tabloid that would connect with the masses, or more specifically, the neo-literate working classes, and fulfil the need to titillate their imagination and their curiosity about salacious details of the personal lives of those who lived the rollicking high life, as well as stuff that the vicar would rant against during his Sunday sermon and admonish his parishioners about, unfailingly reminding them of the Biblical warning that strait is the gate and narrow is the way. If he knew of the tasteless, ale-sodden jokes that were spun around ‘strait’ and ‘narrow’ and which would raise guffaws of crude laughter during drunken revelry at pubs on Sunday evenings, he preferred to ignore them.

Hence was born the News of the World which grew into Britain’s largest-selling Sunday tabloid, flush with more than raunchy tittle-tattle about the rich and idle and the naughty deeds of ‘street walkers’ and ‘immoral women’ with appetites that would shame both Samson and Delilah. And so it remained till its closure today (July 10,2011), a full 168 years after its launch, in circumstances that either the paper or its owner, the redoubtable media baron Rupert Murdoch, could have ever imagined. The tabloid remained true to its creed till the end — News of the World: The Best for News, Showbiz and Sport Exclusives... Just that there was little or nothing of ‘news’ as most people understand the word, and a lot of ‘showbiz’ — who’s sleeping with whom — and ‘sport exclusives’ — what the footballers’ wives have recently been up to while their husbands chased skirts at Chelsea.

Here’s a sample of headlines from the paper showcasing ‘showbiz’: “Broke star Katona is going back to ex Dan Foden”, “Single parent Elizabeth Pearce made history by having the first IVF tot paid for by NHS — but is it right?”, “Birthday pic proves Cheryl’s taken Ash back; She does sexy lap dance for cheating ex-husband before they disappear to hotel room”. And, not to forget the ‘sport exclusive’ for which the paper’s readers presumably eagerly waited for Sunday to dawn, “Cheeky mates show off Lamps’ Chelsea buns; Footie ace’s pals pull down his swimming trunks while on holiday with fiancee Christine”. Sunanda K Datta-Ray, a columnist with this newspaper and my editor at The Statesman, descended from The Englishman and whose pages were used for wrapping fish-and-chips at the annual Calcutta Rowing Club race in an in-your-face display of inverted snobbery every time the ship carrying the month’s copies of The Times was late, had the perfect description for tabloids like the News of the World and the Sun given to servicing the base urges of the lowest common denominator of the British underclass: He would call it tits-and-bums journalism.

Read the rest of this article here, my Sunday column Coffee Break in The Pioneer…
Posted by Kanchan Gupta at 9:15 am

Email ThisBlogThis!Share to TwitterShare to FacebookShare to Pinterest
Labels: Casual notes on media

You are right.We should worry more about OUR media.On Saturday,9th July, CN 18 in their programme " Ministers for change" showed Gujarat's industrialisation.Bulk of the time was provided for the critics like Yogendra Yadav and one Prajapati from an NGO in north Gujarat to criticise whatever was being done by the state govt.So the message was, don't go to Gujarat.It is not good!This from country's Business channel.
TOI has posted a veteran[ Rajiv Shah] in Gandhinagar, ONLY to report [ four times a week] the " huge failures and misdeeds" of BJP government.
This " News of the World" could appear saintly compared to what our so called secular media is doing to Hindus.

The Indian media is not far from the News of the World.I still remember the "awful" coverage of 26/11 by the so called electronic media like vultures feeding on the carcasses of the carnage.