Time for Hindus to leave or perish? 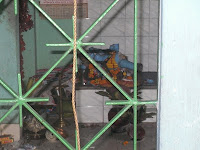 Is it time again for Hindus to leave or perish ‘in the flames of fanaticism’? If yes, where will they flee to? Isn’t India their land too?
(A Kali Mandir desecrated by rioting Muslims in Deganga.)

In 1946 there was no ‘Right-wing media’ and ‘Left-liberal media’ in Bengal (or, for that matter, in India as it existed then). There were newspapers and journals that were clubbed together as the “Hindu Press” because they did not blindly echo the Muslim League’s raucous demand that all of Bengal must go to (East) Pakistan, and there was the “League Press” comprising dailies, weeklies and monthly magazines, of which there was a surfeit those days, all of them virulently anti-Hindu and hence pro-Pakistan — with the notable exception of The Statesman which was then edited by Ian Stephens who was pro-Pakistan and hence anti-Hindu.

Curiously, newspapers and journals opposed to the League’s politics, policies and programmes were labelled as “Hindu Press” by Bengal’s blatantly communal Government led by the Muslim League and headed by Huseyn Shaheed Suhrawardy as well as the Province’s British administrators who were never quite comfortable with the “Hindoo baboo” although he had proved to be an invaluable ally in first setting up and then managing the colonial enterprise after the sepoy mutiny of 1857 which left the Mussalman out in the cold, to be tolerated but not to be trusted. Newspapers like The Star of India, which wielded considerable influence among Muslims, and The Statesman, whose columns were brazenly used by Ian Stephens to try and sway official policy and public opinion in favour of Pakistan, were just referred to as the “League Press”, as were Urdu and Bengali rags that openly called for murder and worse if Hindus stood in the way of their ‘homeland’ — or the “land of the pure” as the name selected by the League, which was to become the core of separatist propaganda, promised its supporters.

Six decades later, newspapers and news channels that, as a matter of editorial policy, intentionally gloss over Muslim communalism which is no less sinister and debilitating for our national life as was the fanatical hatred towards Hindus preached and practised by the Muslim League, are strangely referred to as the “secular media”. Measured by the same yardstick, the “League Press” was the “secular media” of 1946, although Ian Stephens would have protested at the suggestion, not least because he would have considered it antithetical to Muslim interests which were then represented by the politics of Muslim separatism about which there was nothing secular.

But we digress. The polarisation of the media, pitting the “Hindu Press” against the “League Press”, became starkly noticeable before, during and after the ‘Great Calcutta Killing’ of August 1946. A month before that ghastly blood-letting on the streets of Calcutta by mobs owing allegiance to and instigated by the Muslim League, the self-appointed ‘sole spokesman’ of India’s Muslims, Mohammed Ali Jinnah, had dropped all pretensions of being a moderate constitutionalist: He had rejected both the Constituent Assembly and the British offer to transfer power to an interim Government in which the Muslim League would be a partner of the Congress. It was either Pakistan or ‘Direct Action’, he threatened; the Muslims, he declared at a Press conference, were ready to “launch a struggle (for which they) have chalked a plan”. Asked what he meant by ‘Direct Action’, an incandescent Jinnah, who never relished answering questions, caustically replied, “Go to the Congress and ask them their plans. When they take you into their confidence I will take you into mine. Why do you expect me alone to sit with folded hands? I also am going to make trouble.”

It is tempting to wonder whether Jinnah had any idea of the ‘trouble’ that he threatened to make on ‘Direct Action Day’, August 16, 1946. If he knew that the League’s rage boys would run riot across Calcutta and mercilessly butcher men, women and children, he did nothing to prevent it. And, if Jinnah was repulsed by the gruesome sight of corpses piling up faster than they could be removed by a paralysed city administration, he never expressed his regret nor did he castigate Suhrawardy, who sat in the police control room during the killings to ensure the police did nothing to stop the ‘direct action’. Records of the time are not entirely reliable. The “League Press” played down, if not entirely glossed over, the murder and mayhem let loose by Muslim League activists; the “Hindu Press” was accused of inflating the numbers of those killed and injured. The official inquiry report would put to shame white-wash jobs done by latter day official inquiries, for instance the one into the 1984 genocide of Sikhs in Delhi. Subsequent literature places the death toll at anything between 5,000 and 10,000. We will never really know the truth.

The story, however, does not end with the harrowing days and nights of August 1946 when vultures descended in large numbers on the roads, streets and gullies of Calcutta, feasting on corpses rotting in the sweltering post-monsoon heat. In a sense, ‘Direct Action Day’ was a curtain-raiser, the prelude to another ghastly massacre. The minority Hindu community of Ramganj in Noakhali district had no inkling of the “organised fury of the Muslim mob” that was unleashed on October 10, 1946. Within days, nearly all of Noakhali was engulfed by communal violence — Hindus were slaughtered like so many sheep; those who tried to flee were waylaid and killed. The “Hindu Press” reported thousands lost their lives; the “League Press” incredibly not only downplayed the violence but insisted there was no loss of lives. Ashok Gupta (no relative of mine and a Gandhian to boot) who accompanied Mohandas Karamchand Gandhi on his Noakhali sojourn prepared a report on the riot in which he recorded tales of Hindus being killed, forced to embrace Islam, and Hindu women being abducted or coerced into marrying Muslims. Such details are missing in official records which merely mention that the riots led to the loss of 200 lives.

The New York Times, reporting on Noakhali, published an AP despatch from New Delhi: “Mohandas K Gandhi, who has been attempting to insure communal peace in the Bengal and Bihar areas, said religious strife in the troubled Noakhali section of Bengal seemed to call for Hindus to leave or perish ‘in the flames of fanaticism’... He released telegrams from Congress workers in Noakhali, which is predominantly Moslem, in which they described attempts to burn Hindus alive.”

Sixty-four years later, areas of West Bengal which have witnessed a tectonic shift in their demographic profile due to unrestrained illegal immigration from Bangladesh, are slowly turning into volatile ‘Noakhalis’. Last week we had a glimpse of the communal belligerence that is building up when the minority Hindus in Deganga faced the “organised fury of the Muslim mob” led by Haji Nurul Islam, a Trinamool Congress MP. Is it time again for Hindus to leave or perish ‘in the flames of fanaticism’? If yes, where will they flee to? Isn’t India their land too?

[This appeared as my column Coffee Break in The Pioneer.]
Posted by Kanchan Gupta at 9:47 am