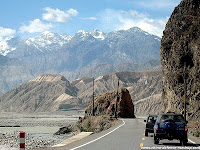 While Prime Minister Manmohan Singh waxes eloquent on the need to bridge the “trust deficit” in relations between India and Pakistan, infusing fresh enthusiasm among mombattiwallahs on both sides of the border, the Government he heads faces a severe crisis of ‘trust deficit’ of a different kind. The confused response of the Government over the presence of Chinese troops in Pakistan-occupied Kashmir — what Beijing describes as “northern Pakistan” — demonstrates this point. It appears that the Ministry of External Affairs is now virtually out of the loop on crucial matters, starved of vital intelligence input necessary for a coherent response to issues that have a direct bearing on foreign affairs and policy. It is impossible that R&AW, which is well-clued into what’s happening in Pakistan-occupied Kashmir despite depleted ‘assets’, should not have been aware of PLA soldiers being flown into what were earlier known as Northern Areas and since 2009 are referred to by Pakistan as Gilgit-Baltistan after the recent floods caused massive destruction of strategic infrastructure, including the Karakoram Highway.

Yet, the Ministry of External Affairs commented on it only after Selig S Harrison, director of the Asia Programme at the Center for International Policy and a former South Asia bureau chief of The Washington Post, wrote about the “quiet geopolitical crisis ... unfolding in the Himalayan borderlands of northern Pakistan, where Islamabad is handing over de facto control of the strategic Gilgit-Baltistan region in the north-west corner of disputed Kashmir to China” in The New York Times. Even after the article was published, presumably placing in the public domain information that had already been secured and processed by R&AW, all that the Ministry of External Affairs could (or would) say is, “We are seeking an independent verification... If true, it would be a matter of serious concern and we would do all that is necessary to ensure the safety and security of the nation.”

That would have been reassuring had the Ministry, which is part of the national security structure, not been so woefully ill-informed. For, by then there was confirmation of the presence of PLA troops by Pakistani officials who said the Chinese were in Gilgit-Baltistan for “relief work”. Last week, China, while denying the presence of 11,000 of its soldiers in Gilgit-Baltistan, has confirmed that it is ‘helping’ Pakistan with men and material to cope with the disaster. India’s feisty Ambassador to China, Mr S Jaishankar — he should have been sent to Beijing long ago — has subsequently conveyed our ‘concerns’, but whether these have been taken seriously is anybody’s guess.

Two inter-linked facts are now abundantly clear and indisputable. First, China has crafted a Jammu & Kashmir policy that is apparently heavily loaded in favour of its ‘all-weather friend’ Pakistan and is inimical to India’s interests. In reality, it is designed to serve China’s strategic interests more than anything else. The main elements of this policy are: Delegitimise India’s sovereign right over Jammu & Kashmir by treating the State as ‘disputed territory’ (hence the stapled visas for Indians living in that State); legitimise Pakistan’s claim to all of Jammu & Kashmir and thus treat Pakistan-occupied Kashmir (including Gilgit-Baltistan) as Pakistani territory or ‘northern Pakistan’ (visas are stamped on Pakistani passports used by residents of Pakistan-occupied Kashmir); and, thereby seek to convert Pakistan’s patently illegal act of ceding 5,180 sq km of occupied Indian territory, known as ‘Trans-Karakoram Tract’ (virtually all of Gilgit-Baltistan) to China in 1963 into a legal transaction.

A resurgent China, having raced ahead of Japan and secured for itself the status of the world’s second largest economy and tamed the US into playing second fiddle (recall President Barack Hussein Obama paying obeisance in the Chinese court), now feels confident of pushing its strategic frontiers beyond geographical boundaries. This is where the second factor of China’s deftly-crafted Jammu & Kashmir policy comes in: It wants to assert its hold over the Northern Areas and make its presence felt to both Pakistan and India, albeit for different reasons. This precedes the planned expansion of China’s strategic infrastructure through and beyond the ‘Trans-Karakoram Tract’ by building a rail link between Kashgar in Xinjiang province and Havelian near Rawalpindi. With Gwadar Port providing it access to the Persian Gulf and an amplified land route across the Karakoram range in place, China would have vastly secured its strategic interests, trouncing those of India. That’s called pursuing a robust policy of enlightened self-interest which underpins both national security and strategy in the shifting sands of 21st century’s geo-politics.

Of course, duplicity laces this policy which is often articulated with a forked tongue. “As a neighbour and friend of both countries, China believes that the (Kashmir) issue should be left to the two countries so that it could be properly handled through dialogue and consultation,” Ms Jiang Yu, the spokesperson of the Chinese Foreign Ministry, told mediapersons in Beijing last week, insisting that China “has no intention to interfere in the Kashmir issue” which “we believe is an issue left over from history between India and Pakistan”. Such pious declarations of China’s ‘non-interference’, however, fly in the face of Beijing’s actions. Asked whether China would review the policy of issuing stapled visas to Indian passport holders of Jammu & Kashmir, Ms Jiang Yu said, “Our visa policy towards inhabitants in the Indian-controlled Kashmir region is consistent and stays unchanged”.

It would be easy to attribute such deliberately un-nuanced — some would say belligerent — articulation of how Beijing views New Delhi’s concerns to a rising China’s arrogance. But the belligerence of those with whom India does business, literally and metaphorically, is not entirely divorced from Indian realities. We cannot escape from the twin facts that our own Jammu & Kashmir policy is stuck in a grey zone of self-doubt, self-pity, self-flagellation and self-recrimination, and our political class is deeply divided on how to deal with an ever recalcitrant minority (that’s what the separatists in Kashmir Valley represent) in a State we insist is inseparable from the Union of India. The all-party resolution that was adopted by Parliament to stop then Prime Minister PV Narasimha Rao from persisting with his “anything short of azadi” approach at the behest of a certain Robin Raphel (who now oversees American aid to Pakistan), restating India’s sovereign right over all of Jammu & Kashmir, including Pakistan-occupied Kashmir of which Gilgit-Baltistan is an integral part, is now a forgotten document. If only successive Governments since then had premised their foreign policy on that resolution and aggressively sought to reclaim India’s territory from Pakistani — and de facto Chinese — occupation, we would have been spared the humiliation that is being heaped on us today.
[This appeared as my column Coffee Break in The Pioneer.]
Posted by Kanchan Gupta at 9:28 am