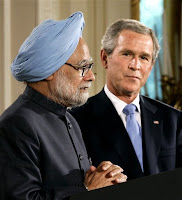 A supplicant in the court of George W Bush
The Prime Minister, by all available accounts, is in high dudgeon. Having promised the Americans that he would ensure the bilateral agreement on civilian nuclear cooperation is signed, sealed and delivered before President George W Bush vacates his current lodgings, Mr Manmohan Singh finds the deal foundering on the rock of Communist obstinacy. Ever since the July 18, 2005 joint statement, which was issued after his meeting with Mr Bush at the White House, Mr Singh has pursued the deal with single-minded determination, caring little for national pride and even lesser for national interest. He has had no compunction keeping the Opposition in the dark on so momentous an issue; at the same time, he has craftily invoked Mr Atal Bihari Vajpayee's name to convince the BJP into supporting what is patently an unfavourable deal, not least because it serves American commercial and strategic interests, subsuming those of India.

Three years down the line, with time running out rapidly both for him as well as his mentors in Washington, DC, Mr Singh, under increasing American pressure to deliver on his promise, is now desperate to conclude the nuclear cooperation agreement. So, though not for the first time, Mr Singh has slyly let it be known that he is prepared to resign from office rather than see the deal die its deserved death. At a time when the national economy is in the doldrums and prices of essential commodities are shooting through the roof, all that he can think of is appeasing the Americans at any which cost. He is least concerned about the appalling performance of the Government he heads or the shenanigans of his Cabinet colleagues. The fact that governance, and along with it India's development story, has virtually come to a grinding halt does not appear to bother him. Nor is he particularly perturbed about the gloomy internal security situation.

All that he wants is the draft 123 Agreement to be converted into a bilateral arrangement that will severely compromise India's strategic interests even while serving US commercial interests by reviving the out-of-business American nuclear power industry, without fetching us any tangible gains. Since propagandists have been claiming that the deal will allow us access to American technology, it needs to be said, and said again, that this is so much bunkum and no more. The ban on transfer of dual-use high technology shall continue to remain in place and the commercial nuclear power technology that will be provided will be under restrictive safeguards. Of course, Mr Bush will be able to claim a foreign policy 'success' and his end-of-term report card shall not be drenched in red ink. The Democrats, who are slated to seize control over both Capitol Hill and the White House after this November's elections, will then use the agreement to further their non-proliferation agenda: Forcing India to sign the CTBT is only the thin end of the edge; the crushing blow will come in the form of the missile technology control and fissile material cut-off regimes to which we shall have to abjectly surrender.

In this wondrous land of ours, such fine details are of little or no consequence. You are either with America or against America. If you are with America, and believe that it is in India's interest to have a strategic relationship with the US -- which is indisputable -- then you must support the deal. What if you do believe in forging a strategic partnership with the US but are opposed to the nuclear deal in its present form for reasons that have nothing to do with ideology but national and strategic interest?

The Left's obstruction of the deal stems from its ideological opposition, call it posturing if you will, to 'American imperialism'. For evidence, look at the CPI(M) Polit Bureau's statement issued on Saturday: "A massive disinformation campaign has been mounted that nuclear energy is a solution not only to the shortage of electricity in the country but also an answer to the oil price rise. This is nothing but a cover to promote the strategic ties with the US." Earlier last week, the CPI(M) had berated the Government for trying to forge an India-Israel-US axis, which to the Marxists would be evil personified. But there are also those who are opposed to the deal as much as they are opposed to the Left's anti-imperialism sloganeering and its bogus anti-Americanism. Most, if not all, of them belong to the same middleclass which our politicians mistakenly believe unequivocally and blindly supports everything American.

It is entirely possible that the Congress, or at least certain sections of it, faced with mounting disquiet over rising prices -- inflation now stands at 11.05 per cent, the same level as in 1995 when Mr Singh was the Finance Minister in PV Narasimha Rao's Government -- has come round to the view that it can mollify the middleclass by pushing through the nuclear deal with the US. It may not be entirely coincidental that the latest effort by the Prime Minister to conclude the agreement follows the publication of the results of the Pew Global Attitudes Survey, which shows that 55 per cent of Indians support Mr Bush; 66 per cent view the US favourably; and, 90 per cent are gung-ho about trade with America. What it does not highlight is that these findings reflect the 'attitudes' of 2,056 Indians who live in chrome-and-glass cities, many of whom would do whatever it takes to see their children migrate to the US and become American Green Card holders if not citizens. The remaining more than a billion Indians do not necessarily agree with them, which, however, does not suggest India hates America.

The fact of the matter is Mr Singh is as clueless about prevailing national sentiments and concerns as the Congress. Cocooned in the sanitised world of 7, Race Course Road and South Block, he has no idea about the anger that is boiling over in India's cities and villages as people struggle to keep their home fire burning. It will be hugely entertaining to hear Congress leaders, and their lackeys in the UPA, tell voters at election rallies that while the Government may have failed to hold the price line, it has succeeded in securing cockamamie guarantees of nuclear fuel supply, which in turn, at some distant date, will provide the people with nuclear power. What they will not mention is that nuclear power, when new reactors go critical more than a decade later, will be frightfully expensive and never contribute more than a tenth of India's requirement of electricity. So, never mind if you are hungry now, vote for the Congress.

Meanwhile, I have missed the deadline hoping to hear that the Prime Minister has made up his mind.
Posted by Kanchan Gupta at 12:17 pm