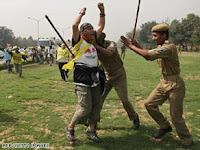 Kanchan, Why is mainstream media not holding the Communists to their word? Would Nilotpal Basu support a move to settle crores of Hindus in J&K and make muslims a minority in that state?