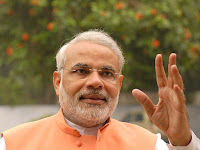 Mass adulation reaches crescendo
It's 3.15 pm and the sun is getting stronger by the moment. The air outside the BJP's rather modest State headquarters at Khanpur is thick with the smoke and acrid smell of crackers; the road is jam-packed with thousands of men, women and children, among them a sprinkling of Muslims in skull caps, celebrating the party's victory. Jubilant Gujaratis, many of them wearing the by-now legendary 'Modi mask', break into bhangra as drummers work themselves into a frenzy. From the makeshift dais at one end of the road, loudspeakers blare, "Mere desh ki dharti sona ugle, ugle hirey moti...". Suddenly a buzz goes around that Narendra Modi's about to arrive and the cheering crowds go berserk. How do they know? The cell phone jammers have been switched on.
Modi arrives at 3.25 pm and there's no holding back the surging crowds. It's a welcome no less than that for a triumphant Roman emperor. Hands shoot up in the air, fists clenched, as the masses chant, "Modi! Modi! Modi!" It could well have been, "Caesar! Caesar! Caesar!" Women hold aloft their children, some no more than toddlers, dazed by the sight and sound, hoping they will get a glimpse of "Chhappan ni Chhaati" (Gujarati idiom for lion-heart, literally means a man with a 56-inch chest) and be inspired to grow up into one. If Modi were to wave at the child, it would be nothing less than divine benediction.
It takes seven minutes for Modi's car, a silver grey SUV, to negotiate the milling crowds by now delirious with joy. As the car comes to a halt outside the collapsible gate of the party office and commandos open the door, a momentary hush descends. Everybody waits breathlessly for their hero to emerge. When he does, a roar goes up. This is the moment they have been waiting for since 8 am. Women and teenaged girls scream in a manner reminiscent of Beatlemania. Children squeal. Crackers go off in the crammed road but nobody cares. Everybody chants, "Modi! Modi! Modi!"
Modi gets down from the SUV, slowly, measuring out the time so that the masses can savour the moment and recall it for their grandchildren. He's wearing his trademark half-sleeve soft saffron kurta with a matching shawl thrown across his right shoulder. He turns around and waves at the crowd, the half-smile on his face spreading into a full smile. Men fling their arms and jump into the air, women swoon and the chanting reaches a crescendo. Having given them the darshan they have been waiting for, Modi marches into the BJP office, purposeful and stern.
In the media centre hall, journalists have been patiently waiting for him since noon. Most are languorous after a hefty celebratory meal served by the party officials. Half-an-hour before his arrival, a written statement by Modi, thanking "the mature people of Gujarat from the bottom of my heart", has been circulated. When he finally strides in, there's no mad rush by camerapersons and photographers. Modi is not to be trifled with, at least when he is present. He repeats the contents of the written statement, attributes his splendid victory to the people of Gujarat. "The credit for this victory does not belong to me or the BJP, but to the five-and-a-half crore Gujaratis. I gratefully acknowledge everybody's contribution and their congratulations," he says and then pauses, daring the media to call him arrogant.
A hand goes up. "Mr Modi, Keshubhai Patel has congratulated you. Do you accept it?" Modi looks at the intrepid reporter and then spaces out his words, "I have already answered that question." The question is repeated. Heads turn to look at the reporter. Modi looks him in the eye and says, "I accept everybody's congratulations and best wishes. The Prime Minister called to congratulate me. I would accept your congratulations, too, if you had the guts to congratulate me." The media briefing ends, Modi strides out.
On the road, the crowds are waiting for a second darshan, hoping that Modi will address them from the makeshift dais. As Modi emerges from the BJP office, the cheering begins afresh. Their "Chappan ni Chhaati" doesn't disappoint them. He waits for the cheering to end and then begins to speak, humbly thanking party workers for their tireless efforts, their sweat and tears. Each word fetches spontaneous applause, women stretch out their arms, teenagers scream. A large group of high school students has been marching around since early morning, holding aloft posters of Modi, their eager faces giving away their devotion to a man who so easily connects with the young. The students cheer the loudest, their adolescent voices cracking, as Modi dedicates his victory to the people of Gujarat. Every sentence mentions Gujarat and Gujaratis twice over, but he speaks in Hindi, mindful that the event is being telecast live from Kashmir to Kanyakumari. He ends his brief speech by asking the crowds to join him in raising the slogan, "Bharat mata ki jai!" It has to be full-throated with both hands raised, he instructs, and the people obey.
Back at the hotel where I am staying, I decide to pop into the Pradesh Congress office which is next door. It's locked, the yard empty. The last person out has been careful to switch off the lights.
Posted by Kanchan Gupta at 11:16 am