May more women find themselves as privileged as Priyanka Vadra. May their husbands get to bypass airport security on account of their wives’ exalted status. And may they also get to buy farmland cheap and convert it to expensive industrial land. In brief, may more mothers-in-law be as ‘empowered’ as Sonia Gandhi, ‘safe’ in the knowledge that the long arm of the law is not long enough to touch them. 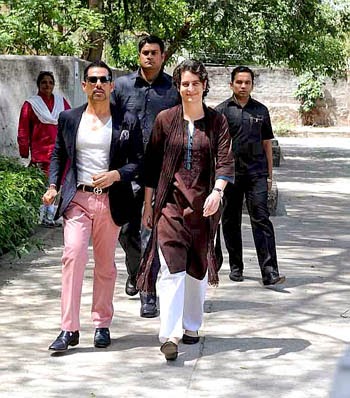 Faced with its worst-ever defeat as this summer’s general election winds down, the Congress has decided to blindly hit out at Narendra Modi, the BJP’s Prime Ministerial candidate riding an unprecedented popularity wave, hoping to score a sixer. It has had no luck till now.

On Wednesday, Priyanka Vadra, who describes herself as “daughter (of Sonia Gandhi), sister (of Rahul Gandhi), wife (of Robert Vadra) and mother (we shall keep children’s names out)” lashed out at Modi, saying, “If you’re talking about women’s empowerment, don’t snoop on their conversations.”

On Tuesday Mrs Vadra had feigned anger that her husband, the one and only Robert Vadra who is possibly the biggest landlord today after the Indian Railways, and has mastered the magic of turning a lakh of rupees into real estate worth thousands of crores of rupees in less than five years, was attacked by Modi in his election rallies. “My family … my husband are being attacked,” she had raged.

Mrs Vadra’s unstated assertion was clear to all: The Nehru household, the Dynasty, the Congress’s First Family, is beyond public scrutiny and criticism; hence, the Dynasty’s son-in-law too should be treated with absolute reverence by us natives and his black deeds should never be questioned.

As Narendra Modi told ABP News on Tuesday evening, he has “no majburi” to be deferential towards the Congress’s First Family. He is not alone. Many of us natives have no obligation to be nice to the members of the Nehru household and their damaad.

Mrs Vadra had also bemoaned the ‘harsh’ language being used by those opposed to the Congress. Frankly, she has not exactly been oozing sugar and honey in her carefully crafted interactions with voters and awestruck mediapersons, the kind whom Modi disparagingly refers to as ‘news traders’.

And now this sly attack on Modi – Mrs Vadra was obviously referring to what Modi’s detractors call ‘Snoopgate’. Till date the Congress and its cronies in the commentariat have not been able to make the ‘Snoopgate’ allegation stick on Modi.

On the contrary, the disgraced cop with a dubious reputation on whose baseless claim the Congress levelled its allegation has been found to be a pervert who constantly sought to sexually harass and abuse women, abusing his power. It’s not surprising that he should have found willing patrons in the Congress.

Mrs Vadra’s concern for women’s ‘empowerment’ and ‘safety’ – she said she was speaking as a “daughter, sister, wife and mother” – is laudable. May more women find themselves as privileged as her. May their husbands get to bypass airport security on account of their wives’ exalted status. And may they also get to buy farmland cheap and convert it to expensive industrial land. In brief, may more mothers-in-law be as ‘empowered’ as Sonia Gandhi, ‘safe’ in the knowledge that the long arm of the law is not long enough to touch them.

Meanwhile, Mrs Vadra would do well to recollect the Congress’s rather long dirty laundry list of scandals involving the abuse of women. Here are some of the stains – a few among the many – that sully the Congress which claims to be a champion of women’s ‘empowerment’ and ‘safety’:

» Sushil Sharma, a Youth Congress leader and Congress MLA, killed his wife, Naina, then proceeded to chop her body into pieces before shoving them into the tandoor at Bagiya, a restaurant in the heart of Lutyens’s Delhi, a short walking distance from 10 Janpath. Mrs Vadra could Google for ‘Tandoor case’ on her smart phone.

» Mahipal Maderna, a powerful Minister in the now ousted Congress Government of Rajasthan, is accused of sexually exploiting and then murdering Bhanwari Devi, an indigent woman. Then Chief Minister Ashok Gehlot tried to scuttle the investigation. Mrs Vadra could Google for ‘Bhanwari Devi case’ on her smart phone.

» Ram Kumar Chaudhary, a Congress MLA of Himachal Pradesh, was arrested for his alleged role in the murder of a young woman, Jyoti, with whom he is said to have had an ‘illicit affair’. He then dumped her as their ‘castes did not match’. Mrs Vadra could Google for ‘Jyoti murder case’ on her smart phone.

We could also request Mrs Vadra to check out the colourful activities of senior Congress leader ND Tiwari – they were not exactly ‘empowering’ for the women ensnared by him, nor do they quite bear out the Congress’s concern for the ‘safety’ women.

A last point: it’s not exactly edifying for Mrs Vadra to speak so loftily of a party one of whose high-profile MPs was caught on tape, not many moons ago, in a sex-for-favour scandal. Lurid descriptions of what featured on the tape were the talk of Lutyens’s Delhi for days. Just in case Mrs Vadra missed them, Google Baba would oblige her with a huge amount of puke-inducing details about this scandal. She could then meet the woman, also a daughter, sister, wife and mother, exploited by her party MP in so hideous a manner, and ask her whether she feels ‘empowered’.

PS: The MP concerned has not been named as he was sharp enough to secure a court injunction preventing the publication of his identity and his activities behind the closed doors of his office.
Posted by Kanchan Gupta at 11:07 am

SIR U HAVE LEFT OUT THE SUKANYA CASE AND THE IMPROPER DISAPPEARANCE OF THE WHOLE FAMILY FORM THE EARTH...