(This article was published on March 25, 2006 in The Pioneer. I am republishing it for the remarkable similarity between the language used by Christian evangelists to denigrate Hinduism and the bunk peddled by 'scholars' like Wendy Doniger as she did in her book 'The Hindus: An Alternative History'. Seen in the photo is Pastor MA Thomas, founder of Emmanuel Mission International of Kota, Rajasthan.)
* * * 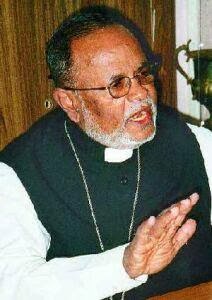 On Monday, March 20, 2006, Assist News Service, based in Lake Forest, California, USA, which circulates news about the work of evangelists around the world, put out a story by Michael Ireland, its chief correspondent, headlined 'India's Prime Minister launches investigation into arrest and persecution of Indian Christians'.
According to this story, "India's Prime Minister, Dr Manmohan Singh, has launched an investigation into the arrest of Hopegivers International President Dr Samuel Thomas.

'Our letter writing campaign is working,' says Hopegivers Executive Director Michael Glenn, 'we must continue to write and fax letters of protest this week.'

Glenn said that because of the campaign, 'The Prime Minister of India has today appointed a four-member commission to investigate the persecution in Kota where our president and top administrative staff have been falsely accused and jailed. This is simply a naked effort to force Emmanuel to shut its doors'."

The story then goes on to urge Christians in the US to petition Senators, Congressmen and the US President against what it portrays as outrageous action by the Government of Rajasthan, prodded by 'Hindu fascists', against Dr Thomas and his fellow evangelists of Emmanuel Mission International that operates five registered societies in that State. These are: Emmanuel Bible Institute Samiti, Emmanuel Anath Ashram, Emmanuel School Society, Emmanuel Chikitsalaya Samiti and Emmanuel Believers Fellowship, all funded by the US-based Hopegivers.

What it does not mention, however, is the reason why Dr Thomas and his associates have been booked for violating Sections 153(a) and 295(a) of the IPC, "which deal with deliberately outraging religious feelings or insulting the religious beliefs of another community." Dr Samuel Thomas has been arrested and his father, Mr MA Thomas, has been declared an absconder.

And, while choosing not to elaborate on the nature of charges, the report quotes Ms Shelley Thomas, wife of Dr Thomas, who is at present in the US: "Nothing that my husband has done was intended to outrage or insult any other religion... This is a totally false charge and unrelated to the organised violence, threats, and attacks that have been conducted against us for the last six weeks."

It also points out that the Government of Rajasthan has "revoked without due process or hearing, all the operating licenses of the Hopegivers-supported bookstores, churches, the hospital and leprosy or HIV-AIDS outreaches, orphanages, printing presses, schools and other institutions."

Dr Thomas has been quoted saying, "Of course, none of these actions are legal. The terrorists and hate groups have taken the law into their own hands and sadly, we have lost confidence in the local Government to control them."

Since evangelist advocacy groups have willfully refused to tell the full story, it would be in order to place the facts on record.

The immediate provocation that led to the arrest of Dr Thomas and others involved with the Emmanuel mission's work in Kota is born of the contents of a book that he and his associates have been distributing among the people. The book, Haqeeqat, is authored by a Kerala-based evangelist, MG Matthew, and purports to be a rebuttal of MS Golwalkar's writings that have been published by the RSS as Bunch of Thoughts.

In reality, it is unadulterated abuse of Hindu scriptures, faith, ritual and tradition. It denigrates every tenet of Hinduism and pours undiluted scorn on Hindu icons and gurus. It casts aspersions on the chastity of Hindu women and questions received wisdom.

Published by the Kerala-based Truth & Life Publications, which puts out evangelist literature, it has been translated into Hindi by Dennis Nathaniel, associated with the Emmanuel mission, who has been arrested by Rajasthan Police. The book has been banned in Rajasthan. The author, against whom a non-bailable warrant has been issued, is believed to be hiding somewhere in Kerala.

Here are some samples of what Haqeeqat, which was being used by the Thomases and their associates to convince Hindus in Kota to abandon their faith and embrace Christianity, has to say:

* "Hindu gods and goddesses are fictitious and were invented to persecute Dalits" (Page 9).

* "To prevent indigenous people from acquiring knowledge, Saraswati invented difficult Vedas (which nobody can understand)". (Page 16)

* "With the progression of time, people all over the world (except India) were freed of their ignorance and they began to disown wicked and cruel gods and goddesses. But in India, because people are (enveloped) in the darkness of ignorance, imaginary gods and goddesses are still worshipped." (Page 17)

* "Naked sanyasis are worshipped by (Hindu) women. The moment (Hindu) women see naked sanyasis, they fall on the ground and prostrate themselves before the sanyasis. (Hindu) women pour water on the sanyasis' penises and then happily drink that water. Ling Devata is gratified when he sees all these repulsive things and feels empowered... These people are ignorant and do not know the difference between what is right and wrong." (Page 93)

* "Sita was abandoned in the forest as per Ram's wishes... Ram later asked Lakshman to kill Sita. In the end, Ram frustrated with life, drowned himself in Saryu. Such are the teachings of half-naked rishis who are praised by Hindutvawadis." (Page 100)

* "Lord Shiva, to get people to worship him, dropped his penis on Earth (Devi), shaking the ground and the sky! ... . Poor Dharti Devi was shaken by the weight of his penis. Seeing this, all the Gods were scared. It seems Gods would use their penises as bombs! Whenever and wherever they wanted to, they would drop their 'penis bombs' to terrorise the people. Thus, they were able to enslave the people... But compared to foreign bombs, these penis bombs were a damp squib." (Page 106-107)

* "(Ramakrishna) Paramahansa should have known that Ganga is the world's filthiest and dirtiest river. How many dead bodies float down this river every day? How many half-burnt dead bodies are dumped into it every day? And Hindus call it the holy river! In fact, all the rivers of India are dirty and polluted... Hindutvawadis pollute the rivers... and then depend on their false Gods to cleanse them..." (Page 122-123)

* "(For Hindus) men can be Gods, women can be Goddesses... animals are gods, snakes are gods... they (Hindu Gods) fight among themselves, marry among themselves, throw out their wives, run away with others' wives, they steal, get intoxicated, drink blood, are reincarnated as animals, fish and tortoise, some of them can lift mountains... Some Gods are in same-sex relationships and are yet able to produce babies. These Gods and Goddesses are always armed because they believe in killing and plunder. Some Gods think their penises are more powerful than nuclear bombs. Others like animals live naked among their followers. Some of them spend their time in yogic exercises, others are in samadhi and happy to see the number of blind followers swell... You can wash away your sins by worshipping the penises of Gods" (Page 146)

* "(Lord) Krishna had a despicable sex life... Shri Krishna is famous because of his love life. He had 16,008 wives. And all Yadav women were his illegitimate lovers. (Hindu) women are drawn towards him because of pornographic and vulgar tales of his sex life." (Page 391)

This is not the first time that the Emmanuel mission has run foul of the local administration and upset Hindus. On February 24, 2005, there was a near riot situation following the mission's crude attempt to convert Hindus through allurement and false propaganda. On that occasion, the mission head, Mr MA Thomas, had promised not to continue with such provocative activities.

The agenda papers at the National Integration Council meeting held under the tutelage of the UPA Government had this to say about Emmanuel mission and similar evangelist outfits:

"Communal tensions due to alleged conversion/reconversions:

In recent years, the issue of conversion/re-conversion has also become a major cause of communal tensions in some parts of the country. Allegations of forced conversions/ reconversions and subsequent communal tensions have surfaced from time to time. On many occasions even apprehensions, not founded on facts, on this account have given rise to communal tensions. Cases in point are the recent events on the occasion of the annual religious Assembly of the Emmanuel Bible Institute Samiti at Kota, Rajasthan, in February 2005. The situation was controlled due to prompt measures taken by the District States of Arunachal Pradesh, Orissa, Madhya Pradesh and Gujarat have already passed legislations to regulate conversions by coercive means or offering allurements."

And yet, there is outrage over action against the Thomases. Such perverse drivel, such horrendous hate, as exemplified by the contents of Haqeeqat, the operating manual of Emmanuel mission, of course, is of no consequence to those who have taken up cudgels on behalf of its peddlers masquerading as Good Samaritans and Christian evangelists.

Instead, they are faxing letters to the White House, the US State Department, the United Nations, and Indian ambassadors to the US and the UN to paint the Government of Rajasthan in communal colours.

And, if Hopegivers Executive Director Michael Glenn is to be believed, Prime Minister Manmohan Singh has appointed a four-member commission to inquire into the "persecution" of peddlers of anti-Hindu hate. If this is true, then a public statement is called for from the Prime Minister's Office. If it's untrue, then the least the PMO can do is issue a denial.
Posted by Kanchan Gupta at 9:32 am

Our Pseudo secular parties are after their vote bank, When Muslims or Christians convert Hindus,they say India is a secular country,if Muslims are converted to Hindus, which has never happened. all secular cried hoarse in Parliament.