Which other democracy has a doormat for PM? 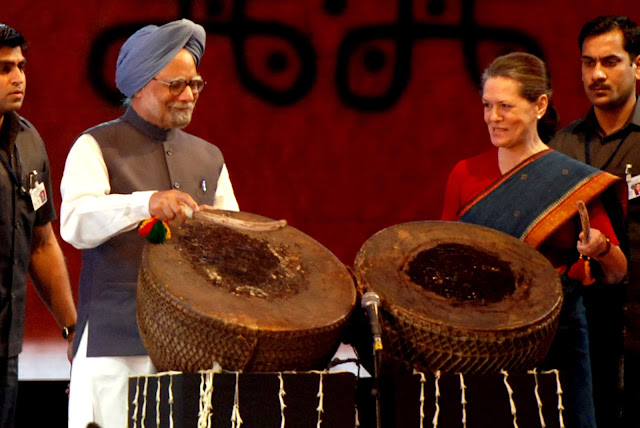 Cornered, bruised and battered, the Prime Minister decided to do an angry old man act in Rajya Sabha on Friday while reading out a banal statement on the ruinous state of the Indian economy. He need not have bothered with reading it out; it may well have been taken as read. India was looking forward to more than a Press Information Bureau handout and the fact that the Prime Minister failed to rise to the occasion is as much a reflection of his towering incompetence as further proof, if at all that is needed, of the huge crisis of leadership that the country faces in these troubled times.

We shall return to what Manmohan Singh said, and did not say, in a while. Before that it would be in order to comment on his mock heroic anger which has so enthused Congress stooges in media, one of whom, an over-rated anchor-turned-editor-in-chief at a media house which has just sacked hundreds of its staff on account of the looming economic crisis, couldn’t stop blabbering and gushing over what he described as the Prime Minister ‘striking back’ at the Opposition. Like much of what he says and writes, this too is an exaggeration whose purpose would be lost on the naïve and the ill-informed.

The perceived ‘anger’ of the Prime Minister was not the rage of a wronged man or a slandered politician, it was the impotent rage of a feckless person who, having offered to serve as the doormat of his boss, can’t figure out why nobody holds him in high esteem. Had Manmohan Singh been half the person he would like others to believe he is, he would have raged against Congress president and Nehru-Gandhi Dynasty matriarch Sonia Gandhi and stormed out of office. Instead he has chosen to not only supinely do her bidding that has fetched rack and ruin to the national economy but also demean the office he holds, bringing disrepute to South Block like no other Prime Minister has ever done, not even Chandra Shekhar during the few months he held that post.

A Prime Minister so denuded of honour, integrity and esteem can’t really expect his party colleagues, leave alone those in the Opposition, to treat him with anything except contempt as they do. It is only natural that the Opposition, barring those individuals who are given to supping with Sonia Gandhi in private while denouncing the Congress in public, should treat Manmohan Singh as beneath contempt. To pretend otherwise, as Manmohan Singh does, is to live in denial. He is welcome to do so, but he should not expect respect — that’s an unfair expectation.

As for his ersatz anguish over being called a ‘chor’ — as some MPs are believed to have done while remonstrating against the limitless corruption under his tutelage — he need not play Little Red Riding Hood; much worse has been said by his party and his boss about the Opposition and its leaders. Surely Manmohan Singh has not forgotten Sonia Gandhi’s vicious attack on Atal Bihari Vajpayee in bazaar Hindi spoken in guttural Italian accent. Or her spiteful description of Narendra Modi as “Maut ka Saudagar”. In which democracy does this happen?

It is laughable that Manmohan Singh wants the people of India to believe that the Opposition questioning him and his Ministers on dubious deals and stalling Parliament to expose the crimes of the Congress and his amazing silence have led to loss of investor confidence at home and abroad. That’s undiluted bunk. Investors have not lost confidence in India — the country and the people are the same as they were before the waning of trust happened — they have lost confidence in the UPA Government, the Congress which leads this Government, and the Prime Minister who heads the Government.

Surely Manmohan Singh knows better than to expect investors to have faith in a Government whose leading lights are constantly looking for opportunities to feather their own nests? Nor should he expect us to believe that investors are not deterred by his Government’s wasteful ways. The Prime Minister conveniently forgets that imposing retrospective taxes on corporates was not the doing of the Opposition. If licences have been cancelled by the Supreme Court, causing telecom investors to shy away from India, it is not because the Opposition stalled Parliament on the Great 2G Spectrum Robbery, it is because Manmohan Singh did nothing to stop the robbery that took place with his full knowledge. If big ticket reforms have languished, it is not on account of the Opposition but due to the pusillanimity of the Prime Minister. We could either accept these facts or blame the crisis in Syria for our woes.

Meanwhile, the latest financial figures came out last evening, delayed by several hours so that Manmohan Singh could make a last ditch effort to sell the fiction that not all is lost and he shall bravely soldier on to resuscitate a sputtering economy. Growth rate is down to 4.4 per cent, exports are down on a year-to-year basis and food inflation remains frighteningly high. Worse, jobs are disappearing across sectors at an alarming rate. And here we have our Prime Minister blaming everybody except the culprits responsible for this criminal destruction of the economy. That’s understandable, though not condonable, since he is primarily to blame for this wanton destruction. No punishment would be sufficient for him.
Posted by Kanchan Gupta at 8:53 am

Realistic analysis. He wants to be PM whether a doormat or a towel!

The son shines
And the son-in-law too!