What’s the BSP complaining about?

Nobody quite remembers In and Out at the Park, Kolkata’s first discotheque, probably because it never quite took off as a happening place. But Pink Elephant, though not the first discotheque in the city, is still remembered, especially by those with spreading midriffs and balding heads who were hip and smart in 1982 when it opened.

The choice of name for an establishment is often accidental. It’s doubtful whether great debate and deliberation went into naming the Grand’s discotheque as ‘Pink Elephant’. What may have worked in its favour is that it had a certain zing; it was unusual; and, hence, it was attention-grabbing. The bizarre became the fashion of the day.

The Grand’s managers or those who crowded the dance floor wouldn’t have known of a little-known mixed metaphor, used rarely but with great effect in certain situations: The pink elephant in the room. It derives from the metaphorical idiom ‘elephant in the room’, which means someone or something so obvious that it cannot be missed by anybody. But when that elephant is described as ‘pink’ by a person, he or she is presumed to be drunk to the gills and thus hallucinating. For, there’s nothing called a pink elephant.

Chief Election Commissioner SM Quraishi has turned that truism on its head, and a pink elephant is no longer just metaphorical. Driving along the arc as you exit Sector 18 in Noida, you see a series of pink elephants, babies and adults, trunks raised in a belligerent show of defiance against those who ordered them covered. When Quraishi decreed that Uttar Pradesh Chief Minister Mayawati’s statues, as also those of her elephants, the BSP’s election symbol, at Dalit Prerna Sthal in Lucknow and Noida should be banished from public sight, little did he realise the implications.

Officials tasked with the onerous job had to work within severe limitations, apart from that of a short deadline. The plastic sheets could not be green, red, saffron or blue, as these are all party colours. Translucent sheets would not do because it would defeat the purpose. The only other colour available was pink. And so the elephant statues stand wrapped in pink plastic sheets, their silhouette in sharp contrast to the open space around them. As for Mayawati, she has been encased in makeshift tin sheet boxes. Kanshi Ram and Bhim Rao have been spared the ignominy.

Ever since it was inaugurated last year, Rashtriya Dalit Prerna Sthal, as the park in Noida that reminds those with a sense of history of Queen Hathshepsut is known, has rarely seen any visitors. Commuters rushing to their offices in Delhi or home in Noida would just zip past the sprawling pink sandstone memorial that Mayawati has built to herself, Kanshi Ram and BR Ambedkar. The statues were never noticed, nor were they ever talked about.

But it’s no longer so. The flow of traffic gets sluggish as everybody tends to slow down as the arc begins, and gawk at the rows of pink elephants. There, it is excitedly pointed out to others in the car, stands Mayawati. Where? There, stupid, that large steel trunk standing vertically over there. Aw. The pink elephants are pretty though. So cute, no?

Yes, they are. And as in-your-face and eyeball-grabbing as the shocking pink which is Mayawati’s favourite colour. What’s the BSP complaining about? 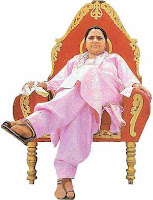