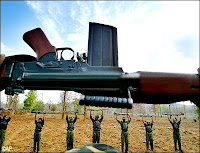 Unless your foot soldiers are good, you can't win the war on Red terror.

The Uttar Pradesh Government has taken an extraordinary step towards police reforms, something which everybody talks about but nobody does anything to implement. Ms Mayawati, who is much criticised for being, to put it politely, unconventional in the manner in which she runs the BSP and the Government she presides over, has instructed her administration to scan the answer-sheets of 2,28,000 candidates who recently sat for a selection examination for 35,000 posts of constables and make them available online. Each applicant will have the right to access his or her answer-sheet, tally it with the listed right answers, and if he or she has been unfairly marked, file an appeal. Given the fact that Indians are a litigious lot, we can expect many of the hopefuls to not only appeal against their grades but even approach the courts. But since it was an objective test based on multiple choice answers and the examiners had no discretionary powers to either mark up or mark down the applicants based on their ‘subjective’ assessment of his or her abilities, it’s unlikely those who contest the results will get too far in using loopholes in the law to either hold up the recruitment process or force the Government to employ those unworthy of the job.

In the past, the recruitment of constables for Uttar Pradesh Police has always been a controversial affair. Instead of selecting candidates based on their merit and potential policing acumen, the emphasis has been on caste, community and, the most important of all, cash. Hopefuls readily paid huge sums of money to get into the State police force, and then subsequently recovered their ‘investment’ and more through means that do not merit elaboration. The money would travel all the way up to those in power. The last time constables were recruited in large numbers for Uttar Pradesh Police was when Mr Mulayam Singh Yadav was in power, and it was a scandal. Ms Mayawati has put an end to that abominable practice, hopefully for good.

The system of recruiting police constables is flawed across the country. Either State Governments are too niggardly and therefore reluctant to fill up existing vacancies or, when recruitment does take place, various considerations other than merit come into play. The recruitment of constables in West Bengal is a classic example of perversion of the process: Over the decades the Left Front Government has institutionalised a system whereby only those affiliated to the CPI(M), or who have been activists and members of the party with a proven track record of loyalty, are drafted to serve as constables and junior officers. As a result, West Bengal Police is, for all practical purposes, an adjunct of the party organisation and the policemen, not surprisingly, are amazingly partisan even when in uniform and on duty. The role of the State police in putting down the agitation against acquisition of farmland for setting up a Special Economic Zone in Nandigram bears testimony to this fact. Such examples abound, and they are not necessarily limited to West Bengal.

What politicians fail to realise is that for short-term gains that suit their narrow interests, or worse, to fill their purses with bribes in exchange of jobs in the police, they have, over a period of time, hobbled the State-level law enforcement agency which is crucial to uphold the authority of the state and keep law-breakers at bay. Constables and their immediate bosses — sub-inspectors and inspectors — are the first respondents to any crisis and turmoil. They are the foot soldiers who have to combat organised crime, deal with terrorism of various shades and confront insurgencies. When the quality of recruitment is poor, or merit is compromised, or vacancies are left unfilled because in their wisdom some Chief Ministers decide that spending more on the police force is a waste of money, the power of the state to enforce its writ and uphold the law of the land is severely diminished. It’s a telling comment on the warped priorities of those who govern India’s States that there is a shortage of at least 6,00,000 policemen in the country.

If we look at the States where Maoists are on the rampage and have ‘liberated’ entire districts from the civil administration, we will find that the police force is either crippled due to lack of personnel or the foot soldiers are of such poor quality and acumen that they cannot be expected to wage war against a disciplined, trained and motivated force of insurgents. When Maoists attacked a police station in Odisha, the constables on duty fell at their feet and pitifully pleaded for mercy. At Lalgarh in West Bengal, constables and their bosses simply shuttered the police stations under their charge and fled even before the Maoists came looking for them. In Bihar, they just don’t show up for duty. As for Jharkhand, the less said the better. Conversely, Andhra Pradesh has been successful in driving the fear of death into Maoists and chasing them out of the State because it has invested wisely in strengthening its police force and in setting up a dedicated anti-insurgency unit which is famously known as ‘Grey Hounds’. Such is the fear of being picked up by the Grey Hounds that Maoists will do anything to avoid taking shelter in Andhra Pradesh.

Reforming the process of recruitment of policemen is only one aspect of police reforms. Training the new recruits, providing them with the latest arms and state-of-the-art communications equipment, instilling in them a sense of pride and boosting their morale so that enemies of the state — and the people — can be effectively neutralised are some of the other aspects. There is also the issue of housing and other benefits which has been begging attention for a long time now. But the process must begin with recruiting the right personnel so that an effective police force can be created over the next few years.

For all her shortcomings, and the list is pretty long, Ms Mayawati has demonstrated that it does not take too much effort to cleanse the process of recruitment of constables who form the bulk of a State’s police force. Yes, a share of the credit should also go to the Union Ministry of Home Affairs which, at Mr P Chidambaram’s behest, has circulated an advisory to all State Governments on how to make police recruitment transparent and rid it of corrupt practices.

Sadly, the chances are that most State Governments will cry foul and Chief Ministers will pretend self-righteous indignation while pointing out to the Home Ministry that law and order is a State subject and the Centre should desist from interfering in their domain. That’s poppycock. When national security is imperilled by inimical forces like the Maoists and jihadis, there is no reason why the Centre should bother about constitutional niceties. India cannot bear the burden of corrupt, indifferent or callous State Governments, irrespective of whichever party is in power.

[This appeared as my Sunday column Coffee Break in The Pioneer on April 11, 2010.]
Posted by Kanchan Gupta at 1:38 pm

Kanchan, you have made me proud! I pray you representative India at an international forum soon. (I hope my spot as an old class mate from Loyola won’t be lost).
Your speech was phenomenal! There are bits of information that are mind boggling- 4 out of every 10 human-beings from China and India! I liked the way you praised the maturity of the two countries regarding the border disputes by ‘not allowing us to be overwhelmed by it’. The quotes from closer to home (Beijing) from history were very effective, specially the the ones from ‘The Book of Changes’ followed by the Emperors.
I only wish you had mentioned the most important historic link between India and China for over two millennia- Buddhism. We know how brilliant scholars had traveled to India, and there journals help us piece together our own history in the aftermath of barbaric attempts to wipe out our past by the Taliban of the middle-ages.
Swami Vivekananda in his address on 26th September, 1893, at The Parliament of Religions, said ‘Buddhism was the fulfillment of Hinduism’. Following is the first paragraph:
“I am not a Buddhist, as you have heard, and yet I am. If China, or Japan, or Ceylon follow the teachings of the Great Master, India worships him as God incarnate on earth. You have just now heard that I am going to criticize Buddhism, but by that I wish you to understand only this. Far be it from me to criticize him whom I worship as God incarnate on earth. But our views about Buddha are that he was not understood properly by his disciples. The relation between Hinduism (by Hinduism, I mean the religion of the Vedas) and what is called Buddhism at the present day is nearly the same as between Judaism and Christianity. Jesus Christ was a Jew, and Shâkya Muni was a Hindu. The Jews rejected Jesus Christ, nay, crucified him, and the Hindus have accepted Shâkya Muni as God and worship him.”
There is a basic similarity and a common thread between Buddhism and Hinduism - the belief in Sankhya Philosophy, which is believed to have been originally taught by Kapil Muni around 800 BCE. It is regarded as one of the oldest philosophical systems anywhere in the world. It is one of the six orthodox systems or ‘astika’, which recognize the authority of the Vedas in Hindu (Indian) philosophy. Sankhya philosophy regards the universe as consisting of two realities: Purusha (consciousness/the Supreme Soul/ God) and Prakriti (phenomenal realm of matter/ material world/ Earth). There are different ways to achieve Nirvana and unite with the Supreme Soul and extricate ourselves from the cycle of birth and rebirth. The principles of Buddha, which were eternal Indian wisdom, is one way.
Incidentally the birth place of the Great Buddha was Kapila-vastu named after Kapila, who much respected saint during time of Buddha around 500 BCE. Sankhya Philosophy was taught to Buddha by his Hindu Gurus before he formulated his faith, which was mistakenly considered to be a new religion by people who did not have knowledge about the old. Buddhism was like adding more colours on the original canvas. Swami Vivekananda recognized that Buddhism and Hinduism are inseparably linked to each other. Rather like a father who likes Honda, and a son who likes BMW, but ultimately it is the same blood running through their veins. I am sure in the future religion the cultural affinity between us would be a major factor for closer relations. But first the P-Secs must be shunted out.

You have put my comment about your speech in China under the article 'To fight Maoists, reform police'. Can you please move it.