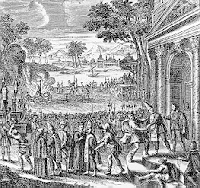 Unite Hindus and protect yourselfBy Swabhimaan on 11/18/2008 5:39:25 PMAll those who are tired of UPA like governments and pseudo secular media, please join Swabhimaan - a movement launched to unite Hindus of India and encourage them to voice their opinion. Interested members please send a mail to swabhimaan2008@gmail.com
DIABOLICAL POPEBy AJAY TYAGI on 11/17/2008 12:06:51 PMStray cases of breaking of window-panes in Managalore churches was blown out of proportions by bishops of Karnataka. English media also lapped up the far fetched theory of hindu terror. Happenings in Orissa and Karnataka are nothing in front of debausherry of perpetrators of Goa inquisition.
Vatican owes us an apologyBy S Kiran on 11/17/2008 11:31:02 AMThe Indian mindset has been tuned in such a way, by decades of rubbish churned out by the spineless, secular media, that they question the authenticity of reports like these. They conveniently believe that the religions from the desert are superior, many of them believing that civilization is a gift of these religions!
This is always been the caseBy Jignesh Shah on 11/17/2008 11:15:47 AMThis is the central truth, we are keen to dwell upon the attrocities committed by the Mughal rulers and we conveniently choose to forget the Christian attrocities committed on our people.The fact remains that the Christian missionaries are on the offensive yet again in garb of EVENGELISTS, this is akin to terrorism. It is indeed a shame, that all crimes committed by the Christians are forgiven.
Missionaries in IndiaBy Narain on 11/17/2008 12:07:14 AMKanchan Gupta is spot on. The old Pope must apologise to the Hindus in Goa for their past crimes. While the Pope is making up his mind, Roman Catholic Sonia Gandhiji could apologise to the Hindus in India.People should read the excellent report, published in the fifties, by Madhya Pradesh Ch. Justice-Neogi, on 'Activities of Christian Missionaries in India'. It was a damning report but Nehru, surprise, surprise, sat on the report. The Christiam Missionaries convert our innocent & poor people.
We are still prisoners of the past!By Sajeev Painunkal on 11/16/2008 10:56:31 PMIt is surprising how even the so called intellectuals try to hold on to events that took place hundreds of years ago, in an effort to justify their present mistakes and atrocities. If the Vatican owes an apology to the Hindus, then how much more the caste Hindus of India should apologize to the so called outcastes of India for the centuries long oppression and humiliation. Just like there is an advancement in science and history, there also an advancement in religious consciousness.
Vatican owes us an apologyBy N.S.Sankaran on 11/16/2008 7:24:42 PMI fully agree with Mr.H.R.Reddy's comments. Even if the Pope is graceful enough to apologise, the secularists will rush to stop him and apologise to him for the article instead.
VATICAN OWES US AN APOLOGYBy H.R.REDDY on 11/16/2008 12:47:20 PMIt is highly humiliating after reading this article. The so called secularists of India who take great objections and comment on Hindus whenever a church is vandalized. They go on to insult the swamis and frame charges of murder. The way the secular leaders in this country betray the faith they practice at home and in public is suicidal and make easy the faild attempts of ex rulers to destroy hinduism.
Posted by Kanchan Gupta at 10:29 am