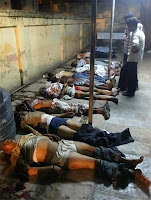 Victims of jihadi attack on Jaipur

Posted by Kanchan Gupta at 9:09 am