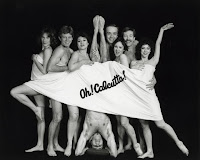 Oh! Calcutta was disappointing
Even during the Swingin’ Sixties, records of the times inform us that official London was quite stuffy and staid, and four-letter words were frowned upon. Films, books and plays were closely monitored for anything that could be considered remotely licentious. Had it been otherwise, the Fab Four would not have made history. So, it isn’t surprising that Mary Whitehouse, who made quite a name for herself as a keeper of public morals, reminding the BBC every now and then that strait is the gate and narrow is the way, should have felt outraged when Kenneth Tynan, a dilettante much in demand in London’s fashionable drawing rooms, managed to smuggle a four-letter word into The Observer and then repeated it on BBC3, a late night show. An incandescent Mary Whitehouse dashed off a letter to the Queen, demanding that Tynan’s “bottom be spanked”. The Queen, of course, demurred, but the House of Commons went into a tizzy and the BBC was forced to issue a public apology.
Whether it was Tynan’s way of getting back at Mary Whitehouse or his craving for what Paul Johnson later described as “calculated self-publicity”, in the late-1960s he began putting together a revue comprising short sketches penned by well-known playwrights and musicians of the time, including Samuel Beckett, John Lennon, Sam Shepard and Edna O’Brien. He named it Oh! Calcutta! after Clovis Trouille’s painting, O quel cul t’as! It had nothing to do with Calcutta of the 1960s (or, for that matter, any other period); O quel cul t’as! is French for ‘What an arse you have!’ Tynan chose it because it fitted in very well with his show which featured total nudity that left the audience gaping. Oh! Calcutta! opened in Off-Broadway in 1969 to furious protests, but it was a huge success: There were 2,400 full house performances in London and 1,600 in New York. In 1976 it was relaunched as a Broadway production and ran for 13 years. Tynan had truly thumbed his nose at Mary Whitehouse and the stuffed shirts of Westminster.
In due course, news of Tynan’s revue reached Calcutta and poor sods not aware of the origin of the name thought it was based on the Second City of the Raj and the play was a celebration of its unique cultural identity. I have heard an apocryphal story that Amrita Bazar Patrika, which printed news in Benglish and was disdainful of English as it is otherwise known, began headlining every city report ‘Oh! Calcutta!’ — for instance, ‘Oh! Calcutta! CMDA digging road’, ‘Oh! Calcutta! Tram breaking down’, ‘Oh! Calcutta! Hangings in early morning’, the last referring to overcrowded buses with people jamming footboards. ‘Oh! Calcutta! Flooding again’ was about waterlogged streets during the monsoon. ‘Oh! Calcutta! Dead body of man found dead’ left little to the reader’s imagination. Funny as the headlines were, they would have been funnier if we were to substitute ‘Oh! Calcutta!’ with the French original, ‘O quel cul t’as!’ I recall my editor at The Statesman, Sunanda K Datta-Ray, telling me how he would rave and rant every time somebody would try to smuggle ‘Oh! Calcutta!’ into the news or editorial pages, and strike it out furiously. “Imagine, a headline that says, ‘Oh! What an arse you have!’ for a story on how the corporation has made a mess of Chowringhee. It’s not funny.”
But Amrita Bazar Patrika, which went out of business years before The Statesman fell on bad times, has had the last laugh. ‘Oh! Calcutta!’ as defined by this newspaper has stuck in the popular imagination. Why else would the owner of a chain of Bengali restaurants in Kolkata, Delhi and Mumbai settle on this name? Till last Sunday, I steered clear of Oh! Calcutta because it made me feel queasy thinking of dining at a place that could well have been called, O quel cul tas! After much hesitation I did set foot into the place, accompanied by the three women in my life, for Sunday lunch. The restaurant, at Nehru Place, was jam-packed and we had to wait for a table that had been booked a week ago, which does not speak very highly of service. Nor can a restaurant claim sholo ana Bangaliana if it serves chicken tandoori, whose overpowering smell tends to swamp the delicate flavours of Bengali cuisine.
The food was remarkably bad. The chholaa’r daal was sweet, the shukto (bitter vegetable stew) was overcooked and the chochchori (mish-mash) was watery. The laau-chingri (gourd with prawns) was an amazing concoction in which the laau had been reduced to a gooey mash and the chingri tasted as if they had been made of rubber. The kaankra-shorshey (crabs in mustard sauce) was inedible: The mustard had no zing and the crabs were finger-sized. The fish curry was passable, as was the railway mutton curry. We had to wait for the boiled rice which took an inordinately long time to arrive. The notun gure’r paayesh (rice pudding made with palm jaggery) tasted fine, but the roshogolla had Haldiram Bhujiawala stamped all over, and the ledikeni (named after Lady Canning as it was her favourite sweet) was a poor country cousin of Delhi’s gulab jamun. It truly felt like eating at O quel cul t’as! The tacky décor with bogus Raj prints and Bengali waiters who insisted on speaking in Benglish popularised by Amrita Bazar Patrika as the nationalist alternative to English did not help reduce the pain when the bill arrived. The loo looked snazzy but the flush didn’t work. Worse, the food settled down in my stomach like a lump of lead and made me feel heavy and bloated for the rest of the afternoon. Was I plain unlucky?
Oh, well. At least the woman who keeps home for us had an afternoon off. When we told her about the meal we had had, she smirked, and later at night produced an excellent fish curry-and-rice dinner.
Posted by Kanchan Gupta at 12:41 pm

Thanks for this blog. The opening had a lot of information that I for one was not acquainted with.

Oh Calcutta! in Calcutta definitely seems to do a better job than the outlet you visited. If you happen to be in Calcutta, you may want to give the brand a second shot at the silver spring arcade outlet.