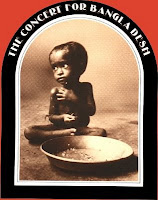 Memory can play tricks on you, as it did with me when I was trying hard to recall how and when I came to know of George Harrison's The Concert for Bangladesh at New York's Madison Square Garden on August 1, 1971. Growing up in small town Jamshedpur in an era when the only source of information was The Statesman unless you also tuned into BBC World Service every night, it was not easy to keep pace with events beyond India's shores.

It was possibly during the summer vacation of 1975 that I came across the album, The Concert for Bangladesh, a three-LP boxed set with its memorable cover of a Bangladeshi refugee child - a stark image of innocence betrayed, reproduced along with this article, that has since remained indelibly stamped on my mind. This was in a second hand record shop in Kolkata's Free School Street. The shop-owner refused to part with the album even when offered the princely sum of Rs 100. It was not for sale, but he would make a copy on a 90-minute cassette which would cost Rs 25. That cassette, its tape worn thin, remained a prized possession till it was borrowed and never returned by a friend in Cairo.

Meanwhile, the album had become a collector's item, both for the fact that it was the first such venture to raise funds to help victims of a human catastrophe - Live Aid came many years later - and its stirring music, especially Bangla Dhun performed by Pandit Ravi Shankar, Ustad Ali Akbar Khan and Ustad Alla Rakha, apart from George Harrison's Bangladesh. A couple of years ago, The Concert for Bangladesh was re-released as a two-CD set, but it did not surface in Indian music stores. During a recent visit to London, I checked at the Virgin store and was lucky to get the last remaining copy.

The live recording of a concert - eloquently described by Pandit Ravi Shankar as "the most moving and intense musical experience of the century" - organised 35 years ago by a musician who has been dead for five years should really not be of any consequence to merit elaborate mention. But the relevance lies in both the events that prompted the concert and the fine print of the booklet that now accompanies the re-mastered album, a far more lavish production than the three-LP boxed set with its half-tone pictures and scratchy music.

First, though, the events. A year after half-a-million people were killed and millions more left homeless and destitute, battling cholera and death, by a cyclone that hit East Pakistan, the other half of Mohammed Ali Jinnah's "moth-eaten" country was in turmoil. Sheikh Mujibur Rahman's Awami League had swept the national election, winning 167 of the 169 seats in East Pakistan and a clear majority in the 300-member National Assembly. Backed with this mandate, he demanded the Prime Minister's job. Backed by the Army and Gen Agha Muhammad Yahya Khan, military ruler since 1969, Zulfiqar Ali Bhutto of Pakistan People's Party insisted he should get precedence over Sheikh Mujibur Rahman.

The stand-off ended on March 7, 1971, with Sheikh Mujibur Rahman declaring, at the historic Race Course Ground rally in Dhaka, "The struggle this time is for our freedom. The struggle this time is for our independence... Joy Bangla." The slogan was soon to reverberate across both sides of Padma, rekindling emotional and cultural linkages that Jinnah had tried to stamp out with his "Urdu and only Urdu" policy. The ghosts of Ekushe February had returned to haunt the inheritors of Jinnah's legacy.

Alarmed by the rapid unravelling of Rawalpindi's control over Dhaka, Gen Yahya Khan despatched his trusted man, Gen Tikka Khan, known for his ruthlessness, to take charge as East Pakistan's Governor. Between March 10 and 13, Pakistan International Airlines cancelled all its flights and deployed its fleet to ferry "Government passengers" to Dhaka. Undeterred by the impending crackdown, Sheikh Mujibur Rahman, hours before his arrest in the early hours of March 26, issued a statement, "Today Bangladesh is a sovereign and independent country... The Bengalis are fighting the enemy with great courage for an independent Bangladesh. May god aid us in our fight for freedom. Joy Bangla."

Gen Yahya Khan thought he had an easy solution to the problem posed by a recalcitrant Sheikh Mujibur Rahman. "Kill three million of them, and the rest will eat out of our hands," he told a foreign correspondent. Gen Tikka Khan took his cue from his master, and launched 'Operation Searchlight' on March 25. His soldiers hunted down intellectuals and political activists; students of Dhaka University were targeted with ferocious brutality. Hundreds were slaughtered in cold blood and dumped into mass graves. As the Pakistani Army's terror spread - it was to ultimately claim three million lives - refugees began to stream into India: Within days, the trickle of men, women and children fleeing the Pakistani marauders turned into a tidal wave.

Millions of refugees took shelter in shanties and open fields, bringing with them tales of limitless horror: Men being killed in front of their families, women being raped and then bayoneted, children being bludgeoned and kicked to death. Tragically, there was little respite from death in the crowded refugee camps where children died like flies, falling prey to diarrhoea. There were no emergency response systems those days and the international community remained untouched by the plight of Bangladeshi refugees, waking up to the grim reality only after Mrs Indira Gandhi decided to join battle on December 3, 1971, a battle that ended with the fall of Dhaka and Gen Amir Abdullah Khan Niazi's abject surrender along with his 93,000-strong force on December 16. Thus was Bangladesh born 35 years ago today.

Far away from the killing fields, two men tried to make a difference for the hapless refugees - Pandit Ravi Shankar and George Harrison. The sitar maestro suggested that musicians come together to raise funds and through the concert tell the world about the horrific plight of the refugees. George Harrison called up his friends, and they all came together on August 1 at Madison Square Garden for The Concert for Bangladesh.

The money raised at the event would appear insignificant today. But for Unicef, $ 250,000 came as manna from heaven and saved many lives in the refugee camps. A little known fact is that money collected through the concert helped aid workers discover a life-saver now called oral rehydration therapy, or ORT - a small sachet of salt, sugar and potassium - which keeps death away from innocent victims of war and famine, too enfeebled to fight hunger, death and disease.

Memories tend to fade and few today would recall that tumultuous day 35 years ago when Dhaka fell. For me, what survives is the music of The Concert for Bangladesh. And the image of a famished child who probably did not live to see his country liberated.

Posted by Kanchan Gupta at 7:33 am

Hey very interesting site. I am looking for Spy Software since kids use my pc. If you know of any worth trying just let me know. Thanks

Very touching read. Please continue to educate the next generation about our history!